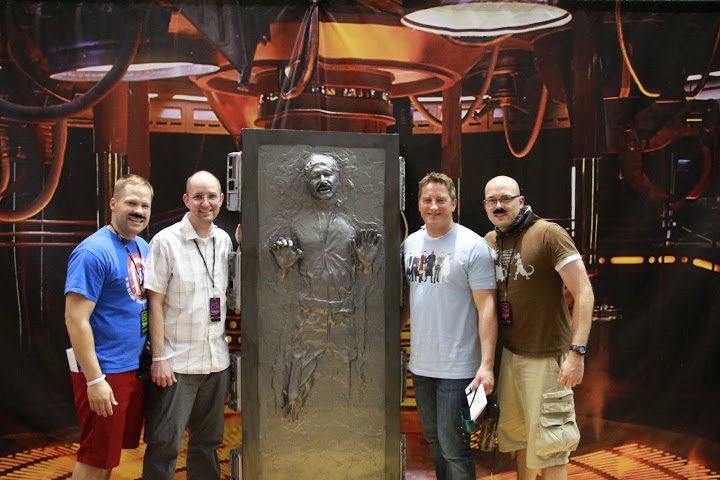 FANX in Salt Lake: 5 Reasons to Take Your Family

In two short years the Salt Lake Comic Con has blossomed into one of Utah’s premier events and one of the most-attended fan conventions in America. It’s so popular, in fact, that an equally-popular second event, titled FanX, has been created to fill the time between the comic cons.

Aside from stargazing, there’s plenty for families to do at these events. Allow me to be your guide, using photos and video from my past experiences to show why you might consider taking your family to FanX 2016. (Video courtesy of The KJZZ Movie Show; photos by C.J. Jackson and Shawn Healy).

REASON # 1: CELEBRITIES AND PANELS- At every Comic-Con event, a host of stars turns out to mingle with the fans. A highlight is the panel discussions, where they answer fan questions directly and share insights from their work (there are also fascinating panels with industry professionals and die-hard fans). Here are some of the highlights from the last event.

Christopher Gorham (The Other Side of Heaven) poses with my brother-in-law.

Sean Astin (The Lord of the Rings, Rudy, Goonies) is a humble fan-favorite.

Studio C left everyone in stitches…

… and met with their loyal fans.

REASON # 2: COSPLAY- Short for “costume play,” the FanX and Comic-con events offer some of the world’s very best people-watching. It’s like the largest, most elaborate Halloween party you’ve ever attended, with many fans crafting their own home-made costumes.

A dalek from Dr. Who.

A tiny tyke meets a raptor-wrangler.

REASON #3: EVENTS– There is an incredible amount to see and do, from numerous kid-friendly events to film screenings, live entertainment, and more. A few of my favorites:

A hypnotist put these geeks to sleep.

Hanging out with the Jedi.

Preparing to blast the Rebellion with a Storm Trooper.

In Twisted Toonz, voice actors from your favorite cartoons act out movie scenes (in this case Harry Potter) in the voices of their characters. A hilarious highlight.

REASON #4: VENDORS – We don’t have a lot of images on this one, but there are acres upon acres of memorabilia, comics, posters, gear, swag, and more on the vendor floor.

C3PO marked the entrance to a whole lot of toys.

Jonathan Decker is a licensed marriage and family therapist at Your Family Expert. He is the clinical director of The Online Center for Couples and Families, offering virtual therapy in several states. Jonathan is a family film critic with The KJZZ Movie Show, Sundays at 10 pm on KJZZ-TV (UT). His book, 250 Great Movies for Latter-day Families, is available in paperback and Kindle.