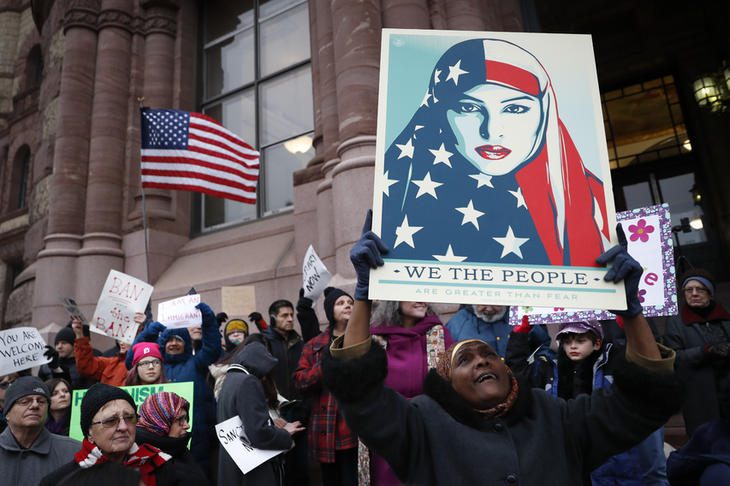 Faithfully Engaging the Immigration Debate in the Age of Trump

As polls show four in 10 Americans support his promised wall along the Mexican-American border and even more approve of a travel ban on citizens from nine terror-linked countries, Trump’s actions create another obstacle for faith-based immigration activists who work to make outreach to illegal immigrants a core part of religious life. “The Christian scripture, the Hebrew scripture and the Quran are all about creating community, welcoming people, caring for people at the margins and responding to those in need,” said Sister Simone Campbell, director of the NETWORK Lobby for Catholic Social Justice. “Policies based on fear and keeping people out are the opposite of a faithful life.”

Trump announced that construction on a border wall between the U.S. and Mexico would begin within a year. He is seeking to enhance the government’s ability to identify and deport illegal immigrants and threatened to take federal funds from cities protecting undocumented citizens. He also banned refugees and other travelers from seven Muslim-majority countries, an announcement that sparked protests in airports across the country and four court orders staying the ban.

Catholic, Jewish and Mormon leaders have long been outspoken on immigration policy reform, advocating for a path to legal status for undocumented Americans sometimes in spite of disagreements with the people in their pews. Members of the evangelical Christian community, although still divided on the policy debate, are increasingly linking biblical teachings on welcoming the stranger to more permissive views on immigration. White evangelical Protestants are still more likely to favor heightened border security and enforcement of current laws than creating a path to citizenship. But nearly half of this group (48 percent) now urge policymakers to prioritize both of these goals, compared to 39 percent in 2010, according to data from Pew Research Center.

There are incorrect statements in this article. The presidential emphasis regarding sanctuary cities is on illegal alien CRIMINALS.

It is not a matter of letting in hundreds of thousands of refugees or not helping refugees. That is a false choice. We can provide plenty of aid to refugees without letting them come here. After WW II, the vast majority of German refugees received foreign aid in Germany or in refugee camps in neighboring countries and were then able to return to Germany. As long as Al Qaeda and ISIS are trying to enter America posing as refugees, we need to be extremely careful about letting in more refugees. President Trump's travel ban is temporary and limited. It does *not* apply to 85% of the world's Muslim population. It only targets the seven countries that have long been identified as hot spots for terrorism. At least three of those seven countries do not even have national governments that control of all their country's territory. So obviously it would be very hard, or impossible, to properly screen everyone coming from these countries. And the Church's official statement on immigration makes it clear that there must be sensible limits on immigration in order to avoid destabilizing our society and putting our economy at risk of being overwhelmed.