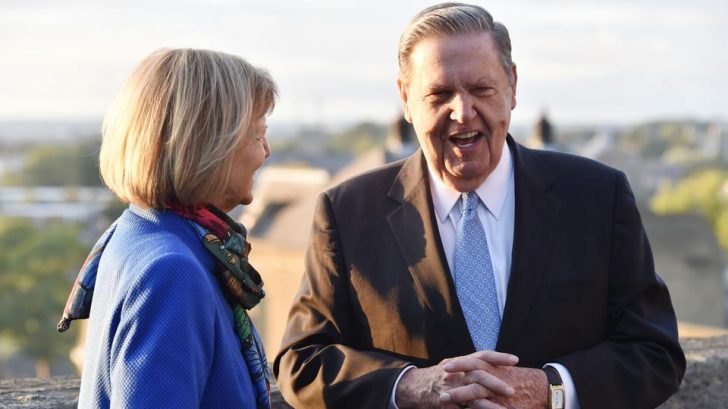 Faith is a key ingredient that can and does help many in the world rebound from refugee status and contribute to society, a Mormon apostle said at Windsor Castle September 9, 2017.

“People can live without a lot of things,” Elder Jeffrey R. Holland told a few dozen faith leaders, academics and government leaders at the Second Windsor Conference on Religious Persecution. “They can live sometimes without much food. They can live sometimes without much hygiene and nutrition. But they can’t live without hope. They need to know that it’s going to get better.”

The apostle of The Church of Jesus Christ of Latter-day Saints gave these remarks during the three-day conference hosted by the AMAR International Charitable Foundation. The gathering explored practical ways to help the Yazidis return home and integrate after living for more than three years as internally displaced people in northern Iraq.

The Yazidis are an ancient minority religion whose roots go back 5,000 years in northern Iraq. Since being targeted by ISIS, however, they have been abused and tortured and their families have been torn apart — an abuse so obscene the United Nations has designated it a genocide. What’s more, the Yazidis are not able to practice their religion and are cut off from the friendship and support of their homeland.

AMAR chair and founder Baroness Emma Nicholson invited Elder Holland to speak at the first conference in 2016. Last year Elder Holland spoke about religious persecution from the Mormon perspective, while this year he was asked to develop that theme into the Church’s return from exile and gradual assimilation into the American mainstream.

“How to turn around, walk proud, stop being seen as a victim, and become successful — that’s the Mormon experience,” the baroness said. “It’s a teaching experience from the Mormons as a gift to the refugees of the world. That’s why I asked him to come.”

Faith Is the Secret to Latter-day Saint Survival and Success

Elder Holland quoted from Church founder Joseph Smith, whose experience in sharing his religious visions with friends and neighbors in the early 1800s serves as a template for how modern-day Mormons survive and thrive. In a lament found in Latter-day Saint scripture, Joseph Smith asks: “Why persecute me for telling the truth? I have actually seen a vision; and who am I that I can withstand God, or why does the world think to make me deny what I have actually seen? For I had seen a vision; I knew it, and I knew that God knew it, and I could not deny it, neither dared I do it.”

This, Elder Holland said, is “the key to Latter-day Saint survival and eventual success. Individual conviction leading to purposeful action, no matter how great the odds against us, is not only our story but the story of many individuals and many institutions that have made a difference in the world.”

Though he was invited to speak from the perspective of a Latter-day Saint to the topic of transition from refugee to thriving community member, Elder Holland acknowledged that we can and should learn from others—especially other people of faith, who must be allowed an indispensable resource that helps their communities overcome adversity.

“That resource is the full and free exercise of their faith, allowing them to pull deeply from the wellsprings of life that are sacred to their tradition,” Elder Holland said. “That is a need that must always be met, a right we must always guarantee.”

Partnering to Brainstorm Best Ways to Help the Yazidis

Diar Yousif, the grandson of the prince of the Yazidis, said refugees need psychological help because many have “lost their faith in humanity. And the camps, the conditions — they are sleeping, eating, doing everything on the same place. So it’s really difficult.”

Baroness Nicholson agreed, pointing to the importance of teaching refugees simple things, such as how to play chess or sew — anything to take their minds off their troubles.

“[We need to help them forget their sorrow for] even five minutes of the day. Otherwise, how can their minds start to recover?” she said. “And I would suggest that if their minds don’t start to recover, then the enemy has won completely. They’ve wiped them out. So I say, come on, let’s get moving again, because we have to defeat the enemy by being successful.”

Sister Sharon Eubank, first counselor in the Church’s Relief Society general presidency, said refugees need to nurture their spirits and progress and can only do so if they have “a friend, meaningful work, and the freedom to practice sincere beliefs.” Unfortunately, she said, the Yazidis “find themselves without many friends, jobless, unable to practice their religion, and really in desperate situation.”

Yousif said he came to the Windsor Conference not expecting much — perhaps it would be just another of many such gatherings he’s attended where people talk but don’t follow up by doing. But after spending three days with people who care deeply about the plight of refugees, he found reason for optimism.

“It gives me hope to go back to Iraq, to sit together with my community, to go to each person as much as possible to tell them there are people all over the world taking care of you,” Yousif said. “There is the AMAR Foundation, there is LDS Charities from all over the world — they are really, really willing to do something for you. This gives us hope, and we hope that it’s going to work somehow.”

The partnership between LDS Charities and AMAR is yielding results, including a health center in one of the largest Yazidi camps in northern Iraq that has served some 26,000 refugees.

“[LDS Charities has] lots of partners around the world, but none of them really as unique as AMAR because they do excellent work on the ground,” Eubank said. “They ground their projects in with the governments so that they’re sustainable. What [the baroness is] doing is very, very special. [She’s] brought people from very different disciplines together for a specific question, and she’s asking of them, bring what you know to this specific question and then they’ll produce action out of it.”

In fact, AMAR and LDS Charities signed a Renewal of Partnership and Association Agreement on the final day of the conference.

After signing the agreement, Sister Eubank recognized the baroness for her tireless work safeguarding families in crisis by naming her as an honorary member of the Church’s Relief Society. The women’s organization, one of the oldest and largest in the world, is tasked with caring for those in need.