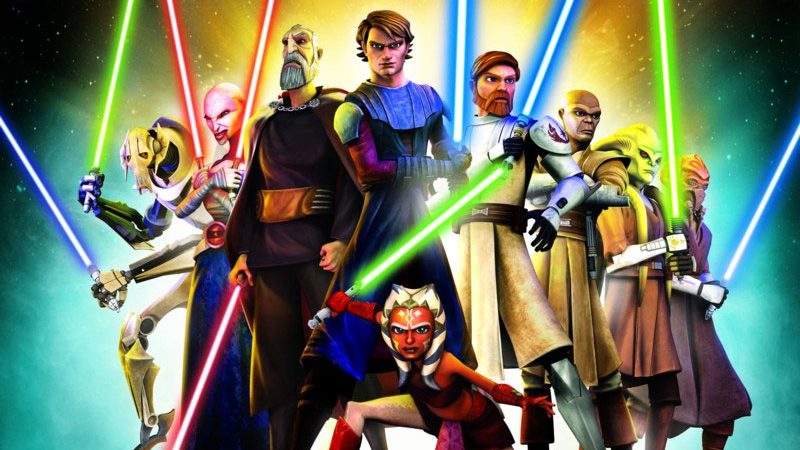 Families with members who love Star Wars will be remiss if they don’t clear their Netflix streaming queue for the next month to focus exclusively on Star Wars: The Clone Wars, the Emmy-winning animated series which leaves the service March 7th.

Don’t let the animated status (or its setting during the divisive prequel era) fool you. These are strongly-written, well voice-acted, gorgeously-animated stories that rank among the very best Star Wars has to offer, for both adults and kids. It’s the universe of the prequels inhabited by the adventurous spirit of the original trilogy, attracting such vocal talents as Mark Hamill, Samuel L. Jackson, Liam Neeson, Simon Pegg, George Takei, Katee Sackhoff, David Tennant, and more. Take a look:

Taking place between Attack of the Clones and Revenge of the Sith, The Clone Wars launched with a mediocre (but worth-watching) movie of the same name, but quickly grew into something special as a series. Giving fans things they always wanted (a heroic and likable Anakin, real kinship with Obi-Wan, character development on the Jedi, deeper exploration of “Force Ghost” mythology) along with things they never knew they needed (an apprentice for Anakin, a resurrected Darth Maul, giving the clones individual personalities), the series stands with the strongest content ever produced about this galaxy far, far way. Even the dreaded Jar-Jar Binks, (used sparingly here) is given some redemption.

Lucasfilm produced 121 episodes of The Clone Wars before being bought by Disney, who continued its dangling arcs on their also-excellent series Star Wars: Rebels. Each Clone Wars episode begins with a stated moral for parents to discuss with their children. Families who watch four 20-minute episodes per day will be able to finish the series before it goes off Netflix on March 7th. Or you can buy them (here and here) and go at your own pace.

Parents should know that the series is comparable in intensity and violence to the actual Star Wars films (including the PG-13 ones), which makes for tonal consistency but also means that this isn’t specifically a “kids show.” Enjoy, and may the Force be with you.

Jonathan Decker is a licensed marriage and family therapist, an actor, an author, and a television personality. He is slated to present a lecture series on “Stepfamilies and Adopted Families in the Gospel” at this year’s BYU Education Week. For his relationship tips, family media reviews, and Gospel articles follow him on Facebook, Twitter, Pinterest, YouTube, or LinkedIn.