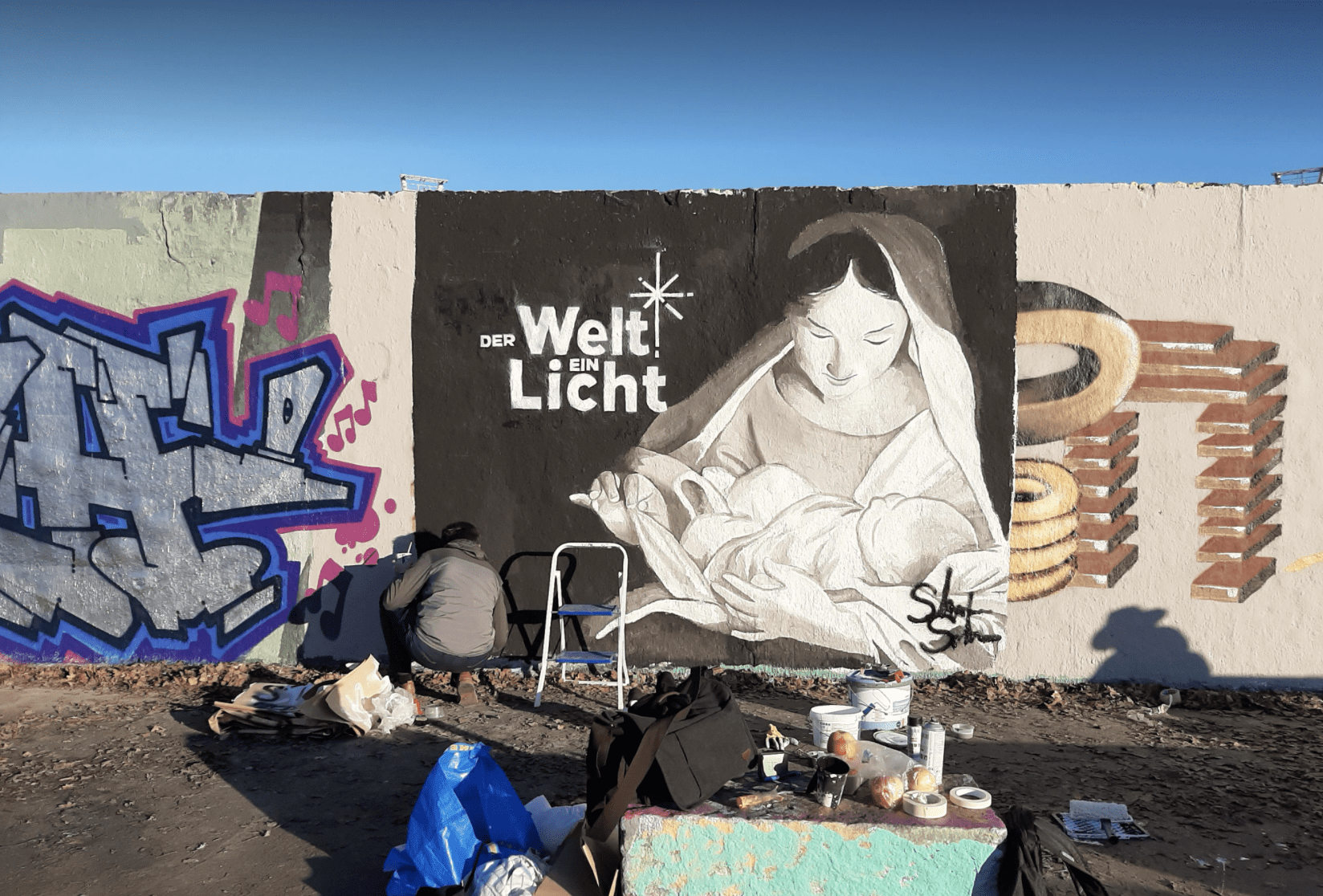 Though the #LightTheWorld campaign looks a little different this year, the goal is still to spread the message of the hope of the Savior across the world. A pair of Elders serving in Germany found a unique way to share the message, painting a mural on the historic Berlin Wall.

The Berlin Wall was a guarded concrete barrier that divided Berlin physically and ideologically for nearly thirty years before it begun to be torn down in November of 1989.

Though much of the wall was torn down, ground up, or chipped away as souvenirs. A few sections still exist including this one, which has been designated as a public art space that can be painted on. And this was the spot where Elder Shane Scholes and Elder Tabor Larsen hoped to do something unique.

With permission from mission leadership, they took on this mural project that was no small task. Though they were able turn initial sketches into a poster stencil measuring 2.5 meters x 2.5 meters or more than 8 feet by 8 feet, the mural was still an involved project that took the two of them working together 6 hours.

“It was quite amazing”, said Elder Scholes, “to to see the reactions that we got during and after completing the painting.” This stretch of wall often becomes a place for people to graffiti, tag, and share negative political pictures and messages. “And so of course having so many people say thank you for painting something meaningful and important definitely made it all worth it!” said Elder Scholes.

And the effect of the project was not limited to those who physically happened to walk by that day and in the days that followed. The elders were able to share their project through social media and it has traveled far and wide.

As of the time we spoke, Elder Scholes said his post had been shared nearly a thousand times, with some of those shares being shared again over 400 times.

“But all numbers aside,” he said, “it has been amazing to see the way the painting has affected people around the world through Facebook. People are adding their comments about how it made their day, about what a great reminder it is, and so on.”

“But I think what has stood out to me the most, is how people have turned this image into a visual representation of 2020, and life in general. The symbology of what the Berlin Wall meant to Germany at that time, and then the symbology of finding the peace through the Savior, and although 2020 was a year of walls and barriers, when we focus on the good and on the Savior… all will be well in the end”

There is no doubt the Lord sends the right missionaries to the right place for the right reason.

Wow! What a beautiful reminder of the Lord's birth and the irony of it being on a wall which was the antithesis of love. Thanks for this great painting.