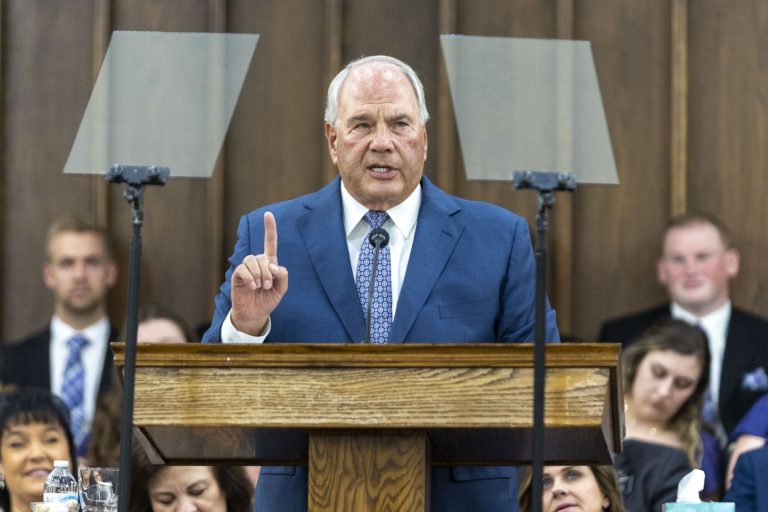 With two semesters left before graduating from the University of Utah, and while serving as an elders quorum president in his campus ward, young Ronald A. Rasband was given an offer from a high councilor in his stake — Jon M. Huntsman Sr. The very next week, Huntsman needed him to be the new account manager for a major customer in Troy, Ohio.

Elder Rasband, now a member of the Quorum of the Twelve Apostles, recounted this life-changing opportunity during a devotional with over 1,500 students at the Institute of Religion near the Weber State University campus in Ogden, Utah, on Sunday, Oct. 23.

Overnight, this son of a truck driver with admittedly not-so-stellar grades had a decision to make: finish his degree in marketing and business, or drop out of school and take this job offer. After consulting with friends and loved ones, Elder Rasband and his wife, Sister Melanie Rasband, prayed for direction. “My dear wife, Melanie, was inspired with our answer. …

“She said, ‘Ron, isn’t this what people go to college for, to find an opportunity like this one?’”

He realized that his future was not about school, but about providing for his family based on a foundation of integrity.

The decision to accept this offer set the course of his entire life, eventually leading to Elder Rasband becoming president of Huntsman’s global corporation. Huntsman offered him the position, “but I had to make more of it than a job,” Elder Rasband said. “I had to make of myself a man of integrity. I realized then and now that my personal integrity is what has defined me in my marriage, business, relationships and Church service.”

He soon learned to be an effective and fair businessman, and lived by the standard, “Be moral, ethical and honest.”

The students in attendance that night are at a similar point in their life, gaining an education before beginning their careers. “Many of you will be asked in the years ahead to bend the rules, to grease the wheels, to look the other way, to compromise,” Elder Rasband told them. “Some may even assume that is the way things are done in education, business, government or, heaven forbid, your own home.

“Don’t you believe it,” he said, punctuating each word. “Your integrity will be on the line, and the price will never be worth it.”