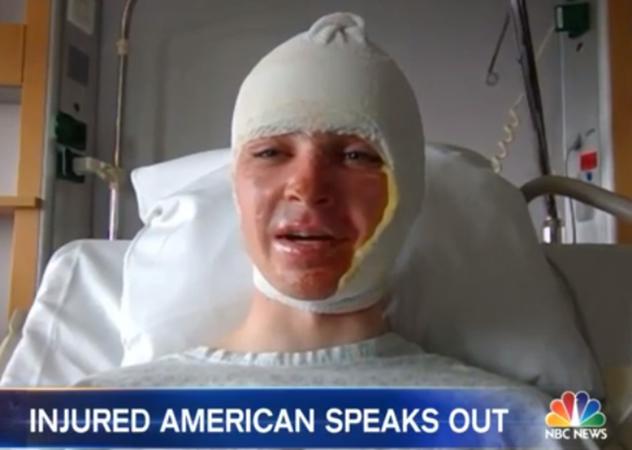 The Deseret News has given this update on the progress of the four missionaries injured in the Brussels terror attack.

After the suicide bombs in the Brussels airport shredded his body with shrapnel and burned his skin, Elder Richard Norby, a 66-year-old Mormon missionary from Lehi, Utah, managed to call his wife.

He was lucid as he told her about the explosions and that he had a broken leg and burns on his face. “I wasn’t totally composed,” Sister Pamela Norby told NBC News on Saturday.

She asked him if he was able to see the three missionaries who had gone with him to the airport so one could catch a flight. When he said no, her heart dropped. “I just needed to know where those young missionaries were because we love them and they’re part of our family.”

Then the phone went dead. The next time she saw him, he was in a medically induced coma. Doctors brought him out of the coma Saturday night.

Jason Norby wrote details of Elder Norby’s experience in the hospital and his awakening from a coma on his Facebook page.

“Best out of five”. That’s how Mom described today’s events. The day started off with our first media interviews, five days after the life-changing event. Our family’s decision to wait for a public discussion of such a private event was because of the complexity and uncertainty of Dad’s situation. When Dad called Mom immediately after the bombing, he told her he had a broken leg and some burns on his face. Reality was a left fibula, broken in three places, a fractured left calcaneus (heel), shrapnel wounds as big as 1-2-inches and localized to his back, hip, and legs with some to his neck. Second-degree burns to the backs of his hands, face, ears and sides of the head, and on the leg. A bit more involved than once thought.

…There are two times each day to enter Dad’s hospital room, one in the afternoon and one in the evening. No exceptions. Each visiting time is about 30-45 minutes, though today, we stayed a bit longer for the evening visit. Contrary to what one might think with such visiting rules, the medical staff is incredibly nice. Today, Dad’s attending physician and nurse took a great deal of time to discuss his care and treatment plan. Did we mention they were incredibly nice? The plan for today was to discontinue the medication for deep sedation in an effort to have Dad wake up a bit and, if all goes well, remove his breathing tube.

To us, this seemed improbable because of how he looks. right now, his head is completely wrapped with bandages with the exception of his eyes and mouth. His burns above the neck don’t encompass his entire head, but wrapping is said to be the best solution to several Hello Kitty Band-Aids. His hands and fingers are wrapped for the same reason. His legs are wrapped because of shrapnel wounds and his left leg has an external metal brace that is fixed to the bone with screws. (Hopefully you’re not eating while you read this). A sheet covers his body – neck to feet. For these reasons, we thought waking him up and extubation didn’t seem possible.

There we saw his bed now propped up at a 30-degree angle, so that he was in more of a sleeping-sitting position and amazingly our beloved gauze-wrapped mummy (or daddy as it were) moving his legs, his head, and shrugging his shoulders! Our hearts skipped beats and our eyes became watery.

He responded to us as we touched his shoulders and arms – the seemingly only places not wounded. We let him know that he was in a hospital and had endured a plastic tube down his throat for the past five days. We told him about the sedation that was wearing off and still making him tired. We let him know that Elders Empey and Wells and Sister Clain were doing well and recovering. We told him that he was loved by many, many people and that thousands of people were naming him specifically in their prayers. Wanting a more definite confirmation that he was hearing us, we asked him to open his eyes if he could hear us. With all the energy our father, husband, and friend could muster, he lifted his head as high as he could off of the bed, and very deliberately turned his head to our direction. We burst into sobs of joy and tears filled our masks. What an expression of love! What a tender mercy and answer to prayers.

Elder Joseph Empey has given his first media interviews according to the Deseret News.

Elder Empey, who is from Santa Clara, Utah, is still in the hospital. He has gauze or heavy bandaging on his head and both hands for burns and on both legs for burns and shrapnel wounds.

“But he’s healing and I think he’s going to have a full recovery and be able to play guitar and snowboard and do some of the things athletically he likes to do, so we’re really hopeful for a full recovery.”

According to the LDS Newsroom in a report from Sister Fanny Rachel Clain’s father, Thierry Clain:

Fanny is doing well. She was operated on yesterday to remove shrapnel from her body and is resting. She also received 2nd degree burns to her hands and face and is receiving treatment. I have been in contact with the hospital but was unable to talk with Fanny because she was sleeping. I have been extremely touched by the concern and goodness expressed by others in regards to Fanny. I look forward to visiting her Saturday and staying a few days with her.