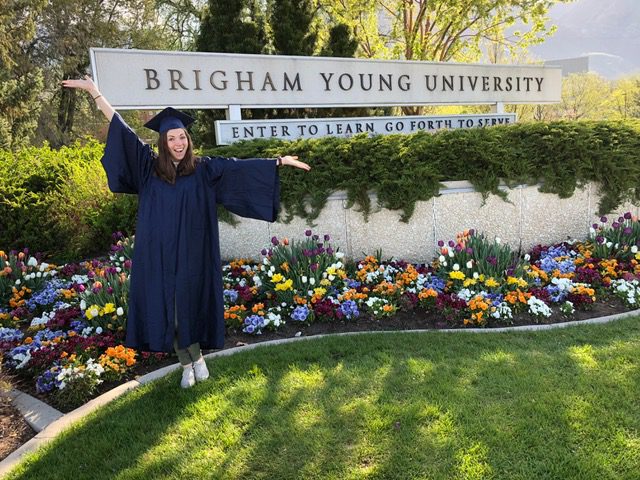 Elder Jeffrey R. Holland acknowledged to the April 2018 BYU graduates, that this is a world scourged by poverty, abuse, malnutrition, disease, human trafficking and terror, but he is counting on them to be “consumed with conviction” to better their lives and lives of others.

“If correcting all the world’s ills seems a daunting task, so be it,” Elder Holland said. “If we can’t look at you to change the world, tell me to whom we should look?”

“Be a ray of light,” the church leader said. “Be your best self and let your character shine.

He cited the story of Thomas Wolsey, who arose to be the most powerful man in the British kingdom, second only to King Henry VIII. “He lived in royal splendor and reveled in royal power,” said Elder Holland, but his fall from grace was sudden when he was unable to get Rome’s approval for the king to get a divorce.

Wolsey said, “Had I said, but served my God with half the zeal I served my king, he would not have in my age left me naked to my enemies.”

“What a tragic end to such a gifted beginning,” Elder Holland said, “What a pathetic farewell to a life that held such promise. And where did it go wrong? It went wrong when Wolsey’s public ambition became more important than his personal integrity.”

He told the audience, “Darkness always yields to light. The sun always rises. Faith, hope, and charity will always triumph in the end. Furthermore they will triumph all along the way.”

“In the days and years ahead, you may suffer some discouragement and disappointment. On occasion you may feel genuine despair, either for yourself or your children or the plight and conditions of others. You may even make a personal mistake or two—serious mistakes, perhaps, though I hope not—and you may worry that any chance to be happy and secure in life has eluded you forever.

“When such times come, I ask you to remember this: This is the church of happy endings.”

See highlights of his talk here.