Elder and Sister Stevenson: How to Unleash the Power of the Family as a Defense and Refuge | Meridian Magazine 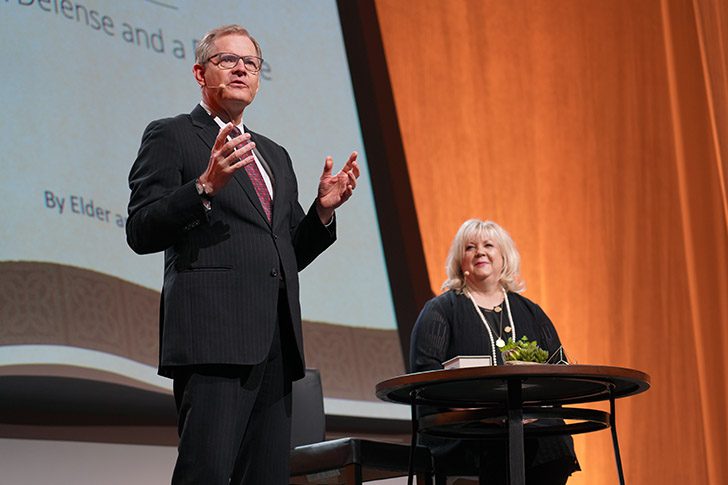 Elder and Sister Stevenson: How to Unleash the Power of the Family as a Defense and Refuge

You and your family can watch this entire presentation from RootsTech Family Discovery Day by clicking here. Don’t miss it. https://www.churchofjesuschrist.org/broadcasts?lang=eng&video=6135258705001

We have a sense that in a time of growing peril, we have to do something to protect our children and grandchildren. At the Family Discovery Day at RootsTech 2020, Elder Gary E. Stevenson and his wife Lesa said that, with the Lord’s help, we can unleash the power of the family and make our home a place of defense and refuge, and, what’s more, we must.

President Russell M. Nelson said, “The adversary is increasing his attacks on faith, and upon us and our families at an exponential rate.  To survive spiritually we need counter-strategies and pro-active plans.”

The Stevensons pointed us toward some of the ways to build a defense by pointing toward what Captain Moroni did in the Book of Mormon to fortify their cities.

“And he caused that upon those works of timbers there should be a frame of pickets built upon the timbers round about; and they were strong and high.

“And he caused towers to be erected that overlooked those works of pickets, and he caused places of security to be built upon those towers” (Alma 50: 1-4).

This was then (1)heaps of earth; (2) covered by timbers; (3)covered by pickets, strong and high, (4)with towers above all this, with (5) places of security on those towers.  Any way you look at it, that entailed so much careful work to put together a formidable defense because he was clear-eyed about who the enemy was.

Elder Stevenson said, “Captain Moroni made something weak become strong to the point that their enemies were astonished at their preparation. These are the kind of counter-strategies and pro-active plans that we are talking to you about today.

“As the Nephite cities of old, we can fortify our homes and establish them to be a defense and a refuge and we can be prepared.”

What are our heaps of earth, works of timbers or frame of pickets that fortify our homes? Of course, the Stevenson’s acknowledged there are many foundational things we can do including daily prayer, scripture study, gospel learning with Come Follow Me, and home evening.  Yet, just as important is regularly creating family experiences that center on the Spirit of Elijah.

Family history and connectedness can profoundly protect our children and grandchildren.

So, what can we do to bring that spirit to our family and bind us together through family history, temple work and stories? The possibilities are limitless. Each family will have their own unique ideas about how to wrap their children’s hearts around family history, but the Stevenson’s shared some things that have worked for them.

Each year, Sister Stevenson and her sister-in-law put on a grandma’s camp for the granddaughters in the family where they share family stories and learn skills such as dancing, cooking, journaling and crafting.

One of the stories they have shared with those granddaughters is about one of Elder Stevenson’s great aunts named Mary Elizabeth Rollins. Three of the Stevenson’s young granddaughters told the story that they had heard at their family gathering.

They said, that when Mary Elizabeth was three, her father died, and she went to live with her aunt and uncle. In her town, the missionaries were handing out the Book of Mormon. Mary Elizabeth, though just a child, came to Isaac Morley and asked if she could borrow the scriptures, just until the morning.

The next morning she returned the book to Brother Morley, who asked her with some doubt if she had read the book. She answered that she had been up all night reading the book by candlelight. Then Isaac Morley told her, “You can bring it home and finish it.”

On stage, when Elder Stevenson asked one of his granddaughters what this story that she had come to know by heart meant to her she answered, “Mary was a little child when she read the Book of Mormon, so I can read it too.”

Sister Stevenson said to her granddaughters, “Doing hard things is part of your genes. It is a part of you. You can do hard things, too.”

You Don’t Have to Look Far

Elder Stevenson said, “You don’t have to look too far in the past to find stories that can inspire your children and help them know who they are.” A study from Emory University concluded that those children who know about their family stories have higher levels of self-esteem, better family functioning, lower levels of anxiety, few behavioral problems and better resiliency.”

That means that children who know how their parents met, where their grandparents are from and other family history are better off. If you know lots of information about your family, have you shared it with your children and grandchildren?

Search the Memories section of FamilySearch, and you can find many stories about your own ancestors to share with your family.

It is also so easy to record something and put it on FamilySearch, that Elder and Sister Stevenson did it as the vast audience watched, telling the story of how they met in an Institute class and then posting it on the site.

Stories are easy to find. Stories are binding, and, they have a powerful effect on your family.

The Book of Mormon as a Family Story

She also mentioned that the people in the Book of Mormon cared about the significance of names. Mormon named his son after Captain Moroni and Helaman named his two sons Nephi and Lehi. She said, “During a time of great wickedness around them, the significance of their names gave them even more strength to stay righteous.”

Helaman told us exactly why he chose those names for his children:

“Therefore, my sons, I would that ye should do that which is good, that it may be said of you, and also written, even as it has been said and written of them” (Helaman 5: 6,7).

Clearly, the people the in the Book of Mormon were doing whatever they could to pass down a connection to their eternal families and examples from the past.

Sister Stevenson said, “Can you see how the Spirit of Elijah is a doorway to inviting the spirit into our homes? These simple ways of connecting to our families helps us in our efforts to create a sanctuary of faith and to help our children know who they are and where they belong.”

Elder Stevenson noted, “As we build this defense and refuge in our homes, what our children learn at home will become a protection for them when they leave home and go out into the world each day. We can take comfort in that the fortifications we build will contribute to the individual, spiritual armor that they bear.”

Sister Stevenson said, “As they step into the world, they can be both on the defense and the offense, armed with the whole armor of God, their feet shod in the preparation of the gospel, wearing a breastplate of righteousness, a shield of faith, a helmet of salvation and the sword of the spirit. They are, after all, as Spirit Nelson taught us, the Lord’s youth battalion.”

Elder Stevenson said, “The Lord’s battalion of today doesn’t walk around holding swords, but they do hold a powerful tool, one that with proper instruction and care can be a source of much good, gospel learning, uplifting messages, positive connections and more.” He was speaking of the cell phone.

He continued, “Never before has a generation of Latter-day Saints carried with them at home, at school at play the holy scriptures. What a great blessing this is, a wonderful use of technology.

“We think you should help, teach and invite your children to use more of their daily screen time for reading the scriptures and to also remember that there is an opposition in all things.  You should monitor and let them feel accountability to you so that this technology will become a blessing for them and not a burden.

“We learn in the Book of Mormon that when Nephi and his brothers return to the tent of their father with the brass plates, Lehi discovered that they contained not only the gospel, but also the genealogy of his fathers.

“The scriptures say it was wisdom in the Lord that they should carry them as they journeyed in the wilderness towards the land of promise. In the history of the world, you, too, are the first generation of parents and children that carry not just your scriptures, but also your personal family history, your family tree. And it can be with you at all times on this small device.” We can protect our families by having them carry scriptures and family stories not just on their phones, but deeply in their hearts.