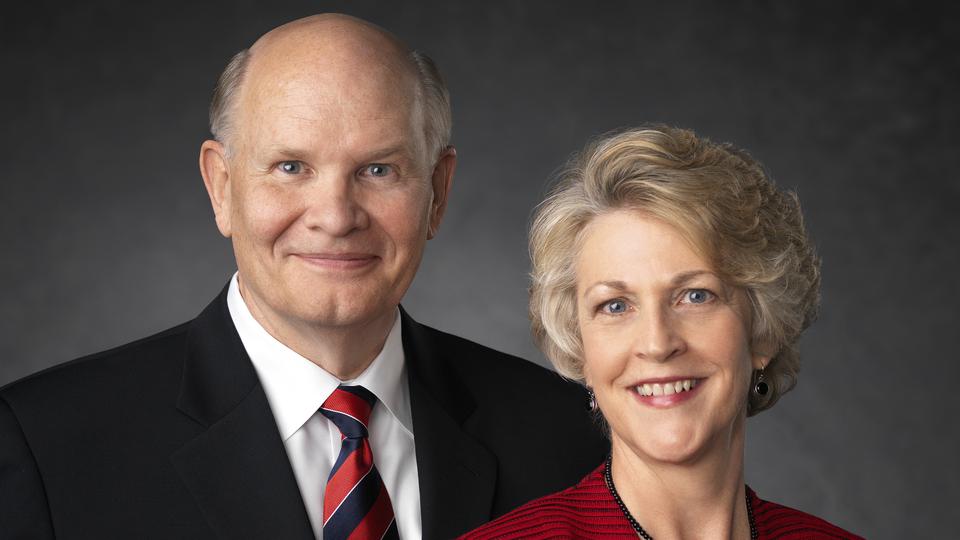 “We felt prompted to discuss a topic that has been on our minds for many months,” Elder Dale G. Renlund of the Quorum of the Twelve Apostles and his wife told young adults in a worldwide broadcast originating on the Brigham Young University-Hawaii campus, Sunday, January 13, 2019.

Speaking side-by-side, their topic was faith and doubt and they began with a parable. They said:

“Imagine having capsized in a boat while sailing in the middle of the ocean. You are wearing a life preserver and have been swimming for hours toward what you believe is the nearest shore, but you can’t be sure. You have become extremely dehydrated, so that every time you start swimming, you become light-headed. By our best estimates, the shore is 30 kilometers, or 18 miles, away. You fear for your life. In the distance you hear a small engine. The sound seems to be coming toward you. Your hope of rescue soars. As you look you see a fishing boat approaching…

“The boat stops and a kindly, weather-beaten fisherman helps you on board. Gratefully you crawl to a seat in the boat, breathing a sign of relief. The fisherman gives you a canteen of water and some soda crackers…You are so relieved and happy. You are on your way home.

“As you begin to revive and start feeling better, you start paying attention to some things you hadn’t really noticed before. The water from the canteen is a bit stale and not what you would have preferred—Evian or Perrier. The nourishment you really wanted was some delicatessen meat followed by a chocolate croissant. You also notice that the kindly fisherman is old, wears worn boots and blue jeans. The sweatband on his hat is stained, and he seems to be hard of hearing.

“You also note that the boat is well-used and that there are dents in the right side of the bow. Some of the paint is chipped, worn, and peeling…You begin to worry that this boat and this captain cannot provide the rescue you need. You ask the old fisherman about the dents and the rudder. He says he hasn’t worried much about these things because he has steered the boat to and from fishing grounds, over the same route, day in and day out for decades. The boat has always gotten him safely and reliably where he wanted to go.

“You are stunned! How could he not worry about the dents and the steering? And why could the nourishment have not been more to your liking? The more you focus on the boat and the fisherman, the more concerned you become. You question your decision to get on board in the first place. Your anxiety begins to grow.

Sister Renlund noted, “Of course, in this parable, the boat represents the Church and the fisherman those who serve in the Church. The sole purpose of The Church of Jesus Christ of Latter-day Saints is to help Heavenly Father and Jesus Christ in their work to bring to pass the eternal life of Heavenly Father’s children. It provides the covenant path, the way to return to our Heavenly Father.

“Those who serve in the Church, though not perfect, are essential to help us on the covenant path. What do the boat and the fisherman teach us about the Church? Do dents and peeling paint on the Church change its ability to provide authorized saving and exalting ordinances to help us become like our Father in Heaven?…You do not have to be an ordained seer like my husband to know that slipping back into the water instead of staying in the boat is risky. Yet when we lose sight of the big picture, the small dents and peeling paint can loom large in our minds.”

The Renlunds said that each person needs to have their own witness of the truthfulness of the gospel and quoted President Russell M. Nelson, “President Russell M. Nelson said, “You don’t have to wonder about what is true. You don’t have to wonder about who you can safely trust. Through personal revelation, you can receive your own witness that the Book of Mormon is the word of God, that Joseph Smith is a prophet and that this is the Lord’s church. Regardless of what others may say or do, no one can take away a witness born to your mind and heart about what is true. This witness is more crucial now than it has ever been.”

Elder Renlund said the beginning of his testimony began when he was an 11-year-old living in Gôteburg, Sweden and was challenged by a leader to read the Book of Mormon and then pray about it. He said a very simple prayer and said, “I did not hear a voice, but it was as if God told me, “I have been telling you all along that it is true.”

Sister Renlund said, “When did you come to a knowledge of your redeemer? How did you feel? If you have forgotten, we urge you to do something to recapture the feeling. This knowledge and these feelings are the beginnings of faith.

“Faith is a choice that each person must make. Faith is not just whimsically wanting something to be true or convincing yourself that it is. Faith is the knowledge of the existence of things that we haven’t seen in the flesh. It is also a principle of action. Faith must be centered in Jesus Christ for it to lead a person to salvation.

“Faith is kindled by hearing the gospel taught by authorized teachers sent by God. Miracles do not produce faith, but faith is developed by obedience to the principles of the gospel of Jesus Christ. In other words, faith comes from righteousness.  Faith does not come from demanding signs from God, but by obeying and following his commandments.”

Elder Renlund told the story of meeting repeatedly with a man he called Steven, who had served a mission, been married in the temple and had served faithfull for many years, but began to have doubts about the Church.

As Elder Renlund visited with Steven, he said he had concerns that Joseph Smith related four versions of the First Vision. So Elder Renlund put him with a researcher on the topic who resolved Steven’s concerns. He said, “Now my questions have been answered, and that no longer bothers me, but now I’m really concerned about the polygamy that was practiced in Nauvoo and after the Manifesto in the 1890’s. That’s really troubling me.”

Again Elder Renlund found an expert in that area for Steven to visit with, and again his concerns did not bother him any more. But then he had another concern. On and on it went.

Sister Renlulnd said, “Sadly, Steven had chosen to become a perpetual doubter. For him doubting pleased him more than knowing and he was digging up in doubt what he had planted in faith. As time went on, as one concern was resolved, another one was found. No matter how much anyone tried to respond and answer these questions, he found another topic on which he was anxious. He focused on the dents in the boat instead of the capability of the boat to lead him to the blessings of the atonement of Jesus Christ.”

She quoted Elder Neil L. Andersen, who when he was called on a mission decades ago, he wondered if he was prepared to enter the mission field. As he prayed the feeling came, “You don’t know everything, but you know enough.”

She said, “At times, the Lord’s answer will be, you know enough to stay on the covenant path and keep my commandments. When Nephi was asked if he knew what the condescension of God was, he said, “I know that God loveth his children, nevertheless, I do not know the meaning of all things.” He knew enough. In this life, we will never know the meaning of all things, but we know enough. Our destinies depend on exercising embryonic faith that will grow as we act in faith.”

The Renlunds asked, “Would you seek financial advice from someone who is broke and in debt? Would you ask for medical advice from a charlatan snake oil salesman?… So why would you entrust your eternal welfare to those who are spiritually bankrupt because they have ripped up in doubt what they once planted in faith? Or who has Jeremiah said have forsaken Christ, the fountain of living waters and hewed them out broken cisterns that can hold no water. These individuals have walked away from that fountain of living waters and want you to trust in something that doesn’t hold water.

“Those things that persuade you to believe in God, to love Him, and to keep His commandments are from God. You will miss spiritually important events if you choose persistent doubt, fueled by answers from faithless and unfaithful sources,” said Elder Renlund.

Watch the full devotional below:

YES! All would certainly benefit. I was fortunate (or likely prompted by the spirit) to remember when to turn the TV on for it. It was well worthwhile to watch.