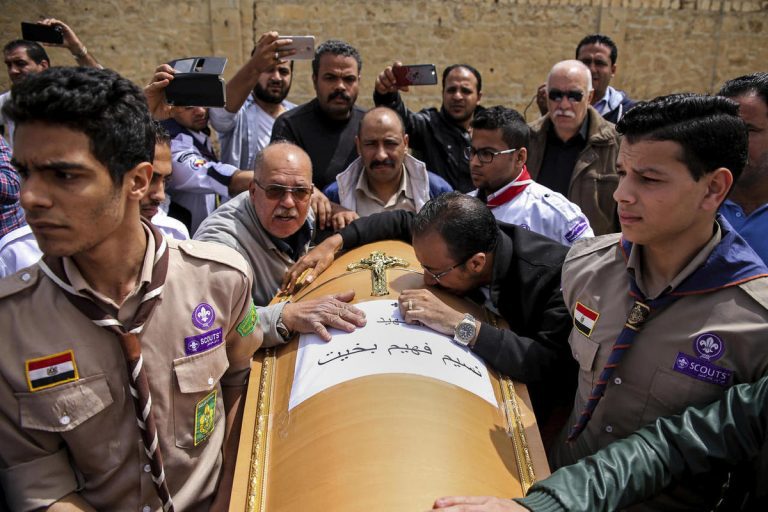 CAIRO — Egyptian Christians were burying their dead Monday after Islamic State suicide bombers killed at least 45 people in attacks on Palm Sunday services in two cities, as a state of emergency went into effect amid fears of further violence.

Women wailed as caskets marked with the word “martyr” were brought into the St. Mina monastery in the outskirts of the coastal city of Alexandria, the footage broadcast on several Egyptian channels. Coptic priests, boy scouts, and mourners carrying flowers joined a procession into the church, the pace set by a beat of snare drums.

At least 17 people were killed at St. Mark’s Cathedral in Alexandria, the historic seat of Christendom in Egypt. Another suicide attack killed at least 28 people inside St. George’s Church in the Nile Delta city of Tanta, the Health Ministry said, updating an earlier toll. IS claimed both bombings.

Rev. Danial Maher, of the Tanta church, lost his 23-year-old son, Beshoy, who was among six deacons killed in the attack. He recalled watching his son wearing white vestments and singing at the service. “He was like an angel,” he said.

Pictures of the elder Maher, sitting helplessly in blood-stained vestments after the attack, were widely circulated online. He buried his son late Sunday.

The attacks led President Abdel-Fattah el-Sissi to declare a state of emergency, amid fears that IS militants, who have been battling security forces in the Sinai Peninsula for years, are shifting their focus to Egypt’s Coptic minority, one of the oldest Christian communities in the world.