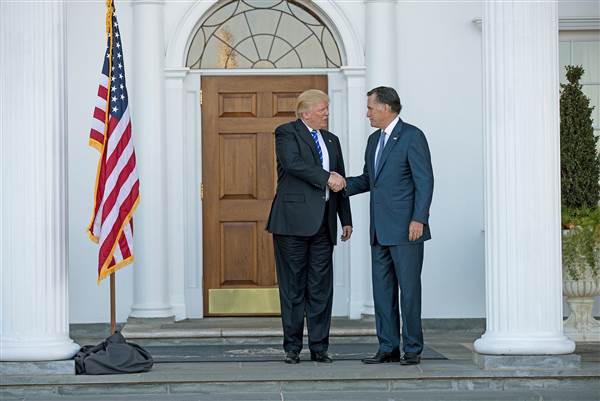 Mitt Romney emerged smiling Saturday from a closed-door meeting with President-elect Donald Trump — a face-to-face sit down he called “thorough and in-depth” after they traded bitter barbs with one another during a divisive election.

Taking a softer tone, Trump and Romney seemed to bury the hatchet at the Trump National Golf Club in Bedminster, New Jersey — where the businessman-turned-politician moved his White House transition team for the weekend — in a meeting that lasted about an hour and a half.

Trump is considering Romney for secretary of state, a source close to Trump told NBC News, although the president-elect has not publicly said what role, if any, Romney could play.

“It went great,” Trump told the press after walking the former governor of Massachusetts outside.

Romney, also addressing the press, added that “we had a far-reaching conversation with regards to the various theaters in the world where there are interests of the U.S.”

He said it was a “very thorough and in-depth discussion in the time we had and appreciate the chance to speak with the president-elect and look forward to the coming administration.”