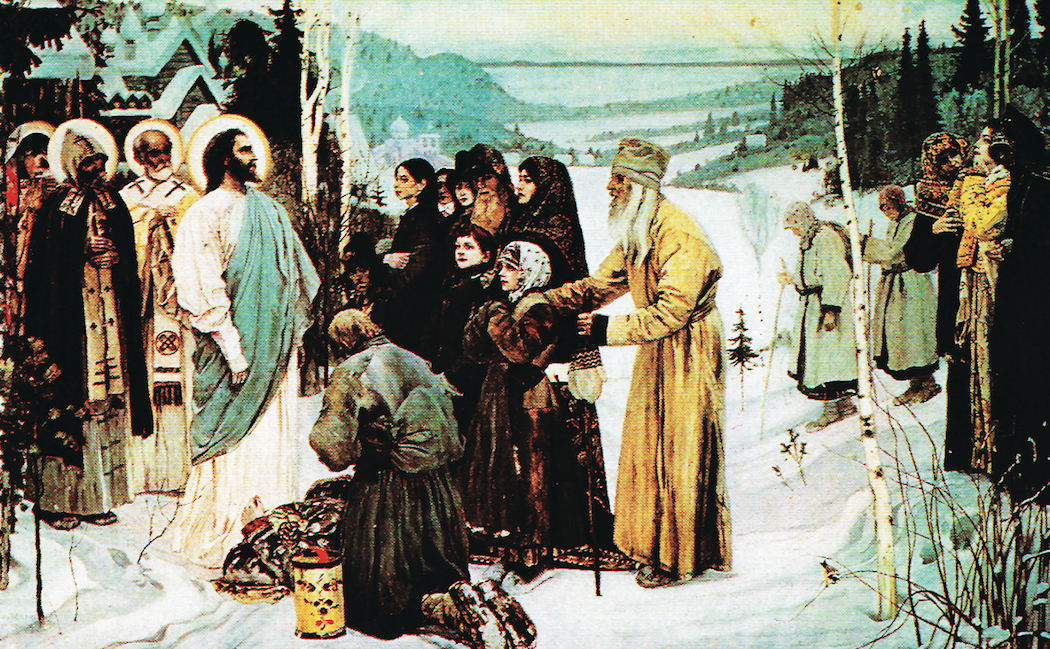 Did Jesus Visit Russia After His Resurrection?

Editor’s Note: The following was originally published in 2016. We are running it as part of Meridian’s Summer Rewind; a week of our most popular and most loved cover stories from previous years.

But I couldn’t take my eyes off of the cover of the phonograph record he had given me as a token of his respect to me for my lecture on free agency and enterprise. The Berlin Wall had fallen, Gorbachev had instituted a radical restructuring (perestroika) and openness (glasnost). As part of this awakening in the USSR I had been invited by the recently retired Deputy Minister of Higher Education to speak some of the leading new businessmen and women in Moscow, Russia.

To hold that phonograph record and see the painting on the front left me speechless.

“Who painted this,” I asked him.

“A great painter for our church about 1900; Mikhail Nestorov who painted so much canvases of faith,” he smiled so broadly as our translator proclaimed the history. “His Holy Rus is a favorite of all of us and it hangs today in the Russian Gallery in Leningrad.”

“What does it depict?”

“Our Savior visiting ancient Russia or Rus.” The translator didn’t wait for the priest to provide the history. “We all know this story.”

“Tell me, Igor,” I asked quietly, “and please ask him where this story came from.”

Igor wanted to tell me, but obliged and asked the priest. They let me know Nesterov based his painting upon an ancient Russian folk tale about how Jesus came to visit the Russian people after his resurrection.

“Who are the haloed visitors behind him?”

The priest smiled and through Igor said, “Nestorov was no fool. He placed the three leaders of the Church of his day in the painting standing in for Peter, James and John.”

By now I had let the import of the painting settle in and looked up and shook my head in assent. Then we embraced and said we hoped to meet again. “You teach me much and I wish to show gratitude.”

I thanked him more profusely now.

Later in 1992 I was invited to have lunch with a person they called the Metropole Peterim, the highest authority of the Russian Orthodox Church in Moscow, and chairman of the ruling council of the entire church. This gentleman is similar to president of the quorum of 12 apostles in the LDS church. (I’m told by some that I didn’t get the right title, but, it’s what I heard and it matters little if I wrote it right because whatever came out of my mouth when I tried to say “Metropole Peterim” pleased him.)

After the lunch and tour of his headquarters, I asked him if he knew of a painting where Christ seemed to be appearing to the ancient Slavic people. He said that he did, that it had been used for a special phonograph record cover and that the original was in their private archives. I asked him where the artist got the idea of such a scene.

He replied solemnly that it was “inspired by an ancient folk tale that said after Christ’s death he visited the Slavic people, ancestors of the Russians, to bring his gospel. The people who listened to Christ were the humble and lowly in the farms and countryside. They took upon themselves his name which when written phonetically in our characters rather than Cyrillic is Kristiany. The word for peasant in Russian is Kristiany. Those who believed in Him took upon themselves His name.”

I asked the Metropole if he believed that Christ actually came to the lands of present day Russia and Ukraine. He nodded, stroking his beard.

“It could very well have been. But perhaps the more likely truth is that the apostle Andrew came through what is today’s Russia on his final mission. But, it could have been exactly as the painting shows.”

I then asked him, “Who would the three apostles have been?”

“In all likelihood, Peter, James and John, though one may have been Andrew.”

“Then you have no trouble,” I pushed, “with the concept that Christ may have visited other people on the earth after his resurrection?”

He smiled and looked up at me, his eyes dancing with a twinkle. “You like Book of Mormon? No. No trouble as you say. It probably happened.”

I’ve spoken to other orthodox priests who recount the same story. Since then I have been in contact with the gentleman who is the Metropole’s assistant and secretary and have received permission to reproduce the painting. He said they are happy to give permission since the painting has little value to them since the artist is now in disfavor with the Russian Orthodox Church. They say he had strange ideas. But, they liked him enough to feature this painting on the cover of their phonograph record celebrating 1,000 years of baptism in Russia.

It all makes one think of Christ’s words as told in John 10 — “Other sheep I have which are not of this fold. Them also I must bring. And there shall be one fold and one shepherd.”

I love a good folk tale.

Google Lake Baikal and go to it's Wikipedia page and then scroll down to Historical Traditions and read about Christ visiting that region.