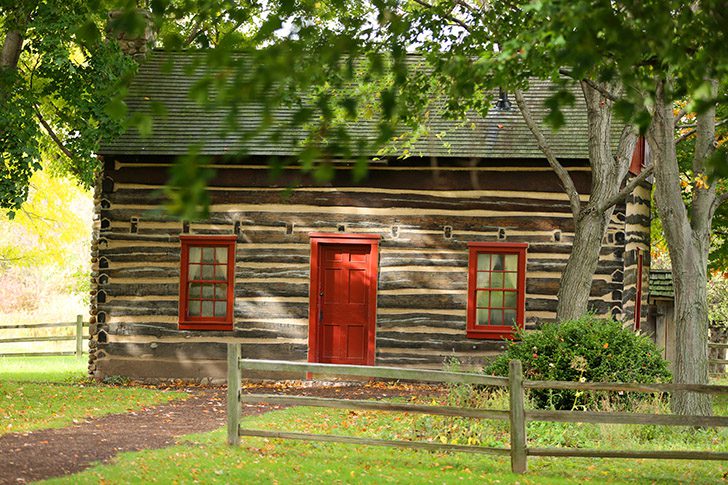 Joseph is commanded to write David Whitmer and ask him to move them to Fayette, New York. David Whitmer wants a witness of the work. Three strangers arrive and in an extraordinary fashion finish all remaining farmwork. David makes the trip to Harmony and gets Joseph and Oliver. The translation process continues in the home of Peter Whitmer Sr.

In the meantime, Joseph was one hundred and fifty miles distant in Pennsylvania and knew not of the matter, except through an intimation that was given through the Urim and Thummim. One morning as he applied it to his eyes to look upon the record, instead of the words of the book being given to him, he was commanded to write a letter to one David Whitmer, who lived in Waterloo.[i] This man Joseph had never seen, but he was instructed to say to him that he must come with his team immediately, in order to convey Joseph and Oliver back to his house, that they might remain with him there until the translation should be completed, as an evil-designing people were seeking to take away Joseph’s life in order to prevent the work of God from going forth among the world.[ii] The letter was written and delivered, and Mr. Whitmer showed it to his father, mother, sisters, and brothers, asking their advice as to what it would be best for him to do.

Engraving of David Whitmer in his later years.

His father said, “Why, David, you know you have sowed as much wheat as you can harrow in tomorrow and the next day, and then you have a quantity of plaster of paris to spread that is much needed on your land. You cannot go unless you get an evidence from God that it is very necessary.”[iii]

This suggestion pleased David, and he asked the Lord for a testimony that it was his will that he should go. He was told by the voice of the Spirit to harrow in his wheat, and then go straightway to Pennsylvania. The next morning David went to the field and found that he had two heavy days’ work before him. He then asked the Lord to enable him to do this work sooner than the same work had ever been done on the farm before-and he would receive it as an evidence that it was God’s will that he should do all in his power to assist Joseph Smith in the work in which he was engaged. He then fastened his horses to the harrow, and instead of dividing the field into what is, by farmers, usually termed bands, he drove round the whole of it, continuing thus till noon, when, on stopping for dinner, he looked around, and discovered to his surprise that he had harrowed in full half the wheat. After dinner he again went on as before, and by evening he finished the whole two days’ work.

David Whitmer was able to work in his fields and accomplish two days’ work in one day.

When he informed his father of the fact, his father could not believe it till he examined for himself and ascertained that it was actually true. “Well,” said his father, “there must be some overruling power in this thing, and I think you had better go as soon as you get your plaster of paris sown and bring up the man with his scribe.”

To this also David agreed. The next morning, as soon as breakfast was over, he took the half-bushel measure under his arm and went out to the place where he supposed the plaster to be, as he knew exactly where he had left it twenty-four hours earlier. But when he came to look for it, behold, it had entirely disappeared! Every vestige of it was gone from the spot where he left it. He ran to his sister’s house a few yards distant and inquired if she knew what had become of it.

“Why?” she said, in surprise. “Was it not all spread yesterday?”

“Not to my knowledge,” answered David.

“I am astonished at that,” replied his sister, “for the children came to me in the forenoon and begged of me to go out and see the men sow plaster in the field, saying that they never saw anybody sow plaster so fast in their lives. I accordingly went and saw three men at work in the field, as the children said, but, supposing that you had hired some help on account of your hurry, I went immediately into the house and gave the subject no further attention.”

David made considerable inquiry in regard to the matter, both among his relatives and neighbors, but was not able to learn who had done it. However, the family were convinced that there was an exertion of supernatural power connected with this strange occurrence.

David immediately set out for Pennsylvania and arrived there in two days, without injuring his horses in the least, though the distance was one hundred and thirty-five miles. When he arrived, he was under the necessity of introducing himself to Joseph, as this was the first time that they had ever met.[iv]

I will observe that the only acquaintance that existed between the Smith and Whitmer families was that formed by Mr. Smith and myself, when, on our way from Manchester to Pennsylvania to visit Joseph, we stopped with David overnight and gave him a brief history of the record.

When Joseph commenced making preparations for his journey, he inquired of the Lord to know how the plates should be conveyed to their point of destination. His answer was that he should give himself no trouble about that but commit them into the hands of an angel for safety, and after arriving at Mr. Whitmer’s house, if he would repair immediately to the garden, the angel would deliver them up again into his hands.

The Whitmers welcomed Joseph and Oliver (and later Emma) into their modest home and the work of translation moved forward.

Leaving Emma behind to take charge of affairs, Joseph, Oliver, and David Whitmer started for Waterloo, where they arrived after a short, pleasant journey in health and fine spirits for commencing anew on their labors. On arriving at Waterloo, Joseph received the record according to promise. The next day, he and Oliver resumed the work of translation, which they continued without further interruption until the whole work was accomplished.

[ii] From the beginning even Isaac Hale, Emma’s father, was disillusioned about Joseph Smith and published statements against him. Concerning the plates, Isaac reported: “I was informed they had brought a wonderful book of plates down with them. I was shown a box in which it was said they were contained, which had, to all appearances, been used as a glass box of the common size window-glass. I was allowed to feel the weight of the box, and they gave me to understand, that the book of plates was then in the box-into which, however, I was not allowed to look. . . . After this I became dissatisfied, and informed him that if there was anything in my house of that description, which I could not be allowed to see, he must take it away; if he did not, I was determined to see it. After that the Plates were said to be hid in the woods.” (Quoted in Porter, “Origins,” pp. 132-33.)

[iii] A second letter was also sent by Oliver Cowdery telling David that he had “revealed knowledge” concerning the plates and that he was convinced that they contained a record of the people who once inhabited this continent (see Porter, “Origins,” p. 235).

[iv] David Whitmer reported the miraculous nature of his first experience meeting with Joseph and Oliver: “I was a little over two and a half days going, and traveled over 40 miles the first day, and met them on the third day. . . . Oliver told me, they knew just when I started, where I put up at night and even the name on the sign board of the hotel where I stayed each night, for he had asked Joseph to look in the Seer stone, that he did so and told him all these particulars of my journey. Oliver asked me when I first met them, when I left home, where I stayed on the road, and the names of the persons at Hotels. I could not tell the names; but as we returned I pointed out the several houses where I had stopped, when he took out his book and found them to correspond even to the names on the sign boards, all of which he had written before we met. As had been told to him by the Prophet, and which agreed in every particular.” (In Cook, Whitmer Interviews, p. 123.)

Love this . Thank you for all you do