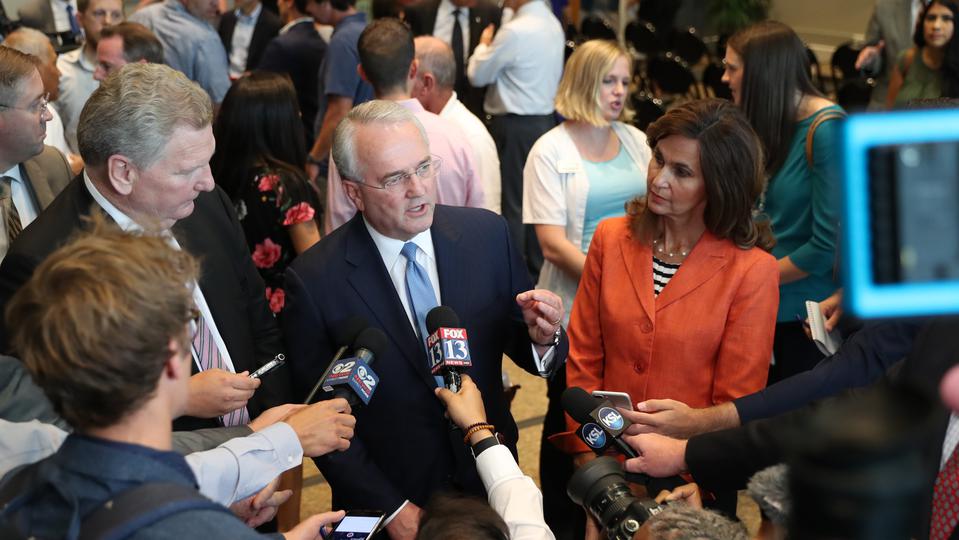 Meridian Magazine joins the Church and other community leaders and experts in encouraging the public to study carefully and vote no on Prop 2.

A coalition made up of medical experts, clergy, law enforcement, educators and business leaders gathered on Utah’s Capitol Hill Thursday to speak in opposition to the state’s medical marijuana initiative that will appear on the ballot this fall.

Coalition members say initiatives to legalize marijuana in other states have led to increased drug use among youth, higher risk of impaired driving and an increase in hospital emergency department visits, among other significant public health and safety concerns.

“The marijuana initiative appearing as Proposition 2 on the ballot this November does not strike the appropriate balance in ensuring safe and reasonable access for patients while also protecting youth and preventing other societal harms,” said Michelle McOmber of Drug Safe Utah and CEO of the Utah Medical Association.

“We do not object to marijuana derivatives being used in medicinal form — so long as appropriate controls and safeguards are in place to ensure vulnerable populations are protected and access is limited to truly medicinal purposes,” said McOmber on behalf of the coalition.

“The Church does not object to the medicinal use of marijuana, if doctor-prescribed, in dosage form, through a licensed pharmacy,” said Elder Jack N. Gerard of the Seventy of The Church of Jesus Christ of Latter-day Saints, a member of the coalition. “We are deeply concerned by the history of other states that have allowed for medical or recreational use of this drug without the proper controls and have experienced serious consequences to the health and safety of their citizens.”

“Our hope and expectation is to bring the broader community together, including all those who have a lot of experience and understanding in what we can do as followers of Jesus Christ to relieve human pain and suffering and to help those afflicted,” said Elder Gerard.

Bishop Scott Hayaski of the Episcopal Diocese of Utah said, “There are significant enough concerns for me to oppose Proposition 2 as it stands, but I will pledge that in going forward I will work for the passage of something that will allow for medical cannabis to be available for those who will benefit from it.”

“Proposition 2 is not about medicine,” said Dr. Adam Taintor of the Utah Medical Association. “It is a poorly disguised initiative to allow recreational use into the state. … Qualifying illnesses under Proposition 2 for the marijuana card opens the doors for almost anyone to easily qualify for the card.”

“My biggest qualm with Proposition 2 is that I feel that the patient’s interest is not at the heart of the matter,” said Enedina Stanger, who spoke at the media event. Stanger moved to Colorado from Utah to have access to medical cannabis to treat her symptoms associated with Ehlers-Danlos syndrome, a genetic disease that affects the connective tissues in her body. “We are excited for the possibilities,” she added. “Let’s just do it the right way.”

“[The proposition] does not provide the protections for children and youth and families,” said Sister Lisa L. Harkness, first counselor in the Primary general presidency of the Church. “We’re very concerned and very empathetic actually to parents who actually are suffering right along with their children, who worry day and night and hour by hour and are looking for a hopeful solution.”

“We also urge lawmakers, patients and community stakeholders to work together to find a solution that works for all Utahns,” said McOmber. “The hallmarks of Utah’s unique policy accomplishments in the past have been civility, compassion and a spirit of compromise, and we are confident an approach guided by these principles will yield similarly effective policies.”

Elder Craig C. Christensen, president of the Utah Area of the Church, is sending an email to members in Utah, urging them to vote against the proposition.

“The Church joins a coalition of medical experts, public officials, and community stakeholders in calling for a safe and compassionate approach to providing medical marijuana to those in need,” said Elder Christensen. “Join us in a call to state elected officials to promptly work with medical experts, patients, and community leaders to find a solution that will work for all Utahns, without the harmful effects that will come to pass if Proposition 2 becomes law.”

The Compassionate and Safe very effective alternative to "Medical Marijuana" is Curcumin and Boswellia. Curcumin (Turmeric) is a natural spice which is common in the India region and foods. Boswellia, to me is more interesting because a key ingredient of "Boswellia" Frankincense both of which have very good anti-inflammatory properties. I have been suffering from extreme pain for many years due to multiple and various injuries including sever back pain. To deal with the pain I had been taking (allot) of Tylenol Arthritis, Allieve / Naproxen Sodium, etc., which of course is very damaging to Liver and Kidneys but what else could I do. The pain was so severe to the point of not being able to sleep for (days) until complete exhaustion finally allowed me to collapse and sleep. As a result of years of this, about 2 years ago, I started experiencing Adrenal Fatigue, Cortisol and Hormone imbalance issues which then only made the problem far worse to the point of pain in All joints, muscles, back, head, eyes, all limbs etc. etc. which lead to complete despair and ultimately Adrenal Collapse. After blessings, lots of prayers and allot of research help from family, we found Curcumin and Boswellia. After taking both several times a day after about 1.5 months (which is the normal time for then to build up in the body), I suddenly started noticing (sharp decrease) in pain and Inflammation. I am still taking both Curcumin and Boswellia (and it costs (for good quality) about $130 - $150 / month but it has been amazing for me and I can testify that it works! There are natural and safe alternatives if you're willing to look. In short, the Lord has provided medicinal herbs that are safe and effective.

The good people of Utah need to look across the world and see a global push to legalize marijuana. Adding medical, health , compassion and healing to a highly toxic plant that contains over 103 cannabinoids is a strategy to normalize, build a pool of addicts then legalize. Who Benefits from legalizing a highly toxic plant? The addiction industry. The Australian Newspaper reports: Corona Brewing is investing $US 4 Billion in Canadian marijuana grower Canopy Growth Corp, one of the biggest corporate wagers on the potential global market for cannabis infused drinks and other products. (snack foods). Not only is Corona joining the rush to increase the addiction market, so are Constellation,($C5.08 billion and with the right to further invest $US 3.4) Heineken and Molson Coors. CEO of family run Corona Rob Sands said Constellation will have " a total mood modulation portfolio". How will parents know if their children have had their 'mood changed' AND THEIR GENES DAMAGED having eaten cannabis/hemp (hemp still has THC and other toxins) infused sodas, snacks etc? MARIJUANA CAUSES BIRTH DEFECTS Utah proves this by having the lowest marijuana use in the USA and the lowest birth defects linked to marijuana. This is why so much money is being spent to convince Utah to use marijuana. Utah will look like the rest of the USA and something else like farmers spraying their crops can be blamed for rapidly rising birth defects like gastroschisis, or dead bowel in Colorado , California, regions of Australia that has heavy marijuana use etc. Professor Stuart Reece in Australia is a world expert on the genotoxicity of marijuana in all its forms is one of the lone voices raising the alarm about marijuana. Professor Reece has all the evidence of the damage marijuana does like Dr Frances Kelsey stopped the drug thalidomide coming to the USA. She took on a major drug company and was called a petty bureaucrat when babies were being born in the UK, Australia and many other places with defects. She was the lone voice gathering the evidence. With even more money at stake in the marijuana addiction industry hiding the evidence of the toxicity of cannabis and wrap it in compassion, politician's silence and votes are being bought as well as the media and grants paid for junk science.