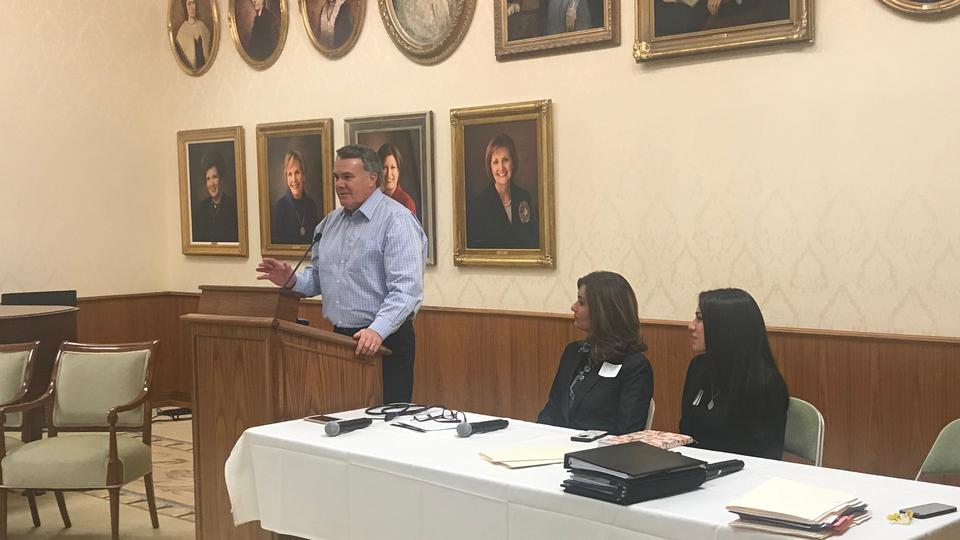 “We’re not opposed to medical marijuana,” said Marty Stephens, director of government relations of The Church of Jesus Christ of Latter-day Saints, to a group of about 20 online influencers in the Relief Society Building in Salt Lake City on Saturday, September 29, 2018.

“My goal today is not to try and sway you,” said Stephens, who met with the mostly women bloggers to explain why the Church has joined a coalition to oppose Utah’s Proposition 2, which would legalize medical cannabis. “I just would like to educate you on why the Church has taken this position.”

Proposition 2 will be on the ballot in Utah in November.

Stephens was joined by Sister Lisa Harkness of the Church’s Primary general presidency and Enedina Stanger, a medical cannabis user and Latter-day Saint, who is part of the coalition.

Stanger moved to Colorado from Utah with her family as “medical cannabis refugees” to have access to medical cannabis to treat her symptoms associated with genetic disease called Ehlers-Danlos syndrome, which affects the connective tissues in her body.

“I knew that there was something on this earth that God had put on there that would help me,” said Stanger, who shared her story with the group. “When I went to Colorado, I was able to get a medical cannabis card, and within a year of a strict medical cannabis regime … and using food as my medicine and using my body to strengthen itself again, I was able to get out of a wheelchair.”

Both she and her husband have competed on the reality television series “American Ninja Warrior.”

“I’m so supportive and happy to be part of this coalition because I truly believe that medical patients need to be safeguarded,” she explained. “Children need to be able to have access to medicine and not have to go to the recreational markets for it. Doctors need to be able to look at mothers and children and give them hope. … We can change the stigma for the future.”

Stanger said her two girls both have the genetic markers for the painful disease that causes her bones to dislocate.

Some of the coalition’s concerns with the 28-page Utah Medical Cannabis Act include the following:

Nearly all law enforcement groups in the state are opposed to the initiative.

In addition, the coalition says data show that youth marijuana usage rates will increase, as they have in every other state where medical marijuana laws have been adopted.

In response to why the Church is involved, Sister Harkness said, “We are part of the community and as such want to help maintain the security of our children and our youth in the communities in which we reside.”

She continued, “I hope you can see in a broader sense how our joining this coalition is a way of counseling, so to speak, of putting in our perspective, putting in our experiences and expressing our urgency to help patients and parents — mothers and fathers and grandparents — that care for patients to find an urgent solution, some hope … to the pain and the suffering that they’re going through.”

“I believe that there’s significant support in Utah for a different way that would allow us to protect our children who don’t need marijuana, and we don’t want to have access to it,” said Stephens. “We’ll protect our law enforcement so they’ll continue to be able to enforce against illegal behavior, and we’ll be able to get access for those who truly need it.”

At a news conference in August, coalition members said the initiatives to legalize marijuana in other states have led to increased drug use among youth, higher risk of impaired driving and an increase in hospital emergency department visits, in addition to other significant public health and safety concerns. They hope Utahns will help defeat Proposition 2 and join with them in supporting a safe, secure method for patients’ access to needed medical care that will also protect youth from unnecessary access to a dangerous drug.

I lay this polarizing debate at the feet of the Utah legislature, who, despite a significant portion of the population supporting some kind of medical marijuana, have refused to take up any legislation. Had they done something, anything in the past few years we would be fine tuning laws rather than trying to clear this very high hurdle.