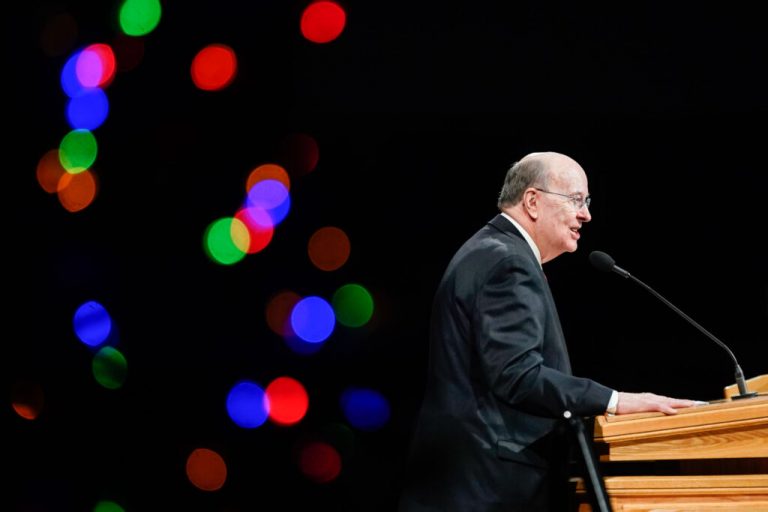 ‘Christ was the example in all things,’ Elder Cook tells missionaries during special Christmas Day devotional

On Christmas Eve in 1960, Elder Quentin L. Cook and his missionary companion, Elder Noel D. Luke, walked the streets of Swindon, England, teaching and blessing the people they met.

“As Christmas night enveloped us there was a surreal atmosphere in the heavens,” recalled Elder Cook, now a member of the Quorum of the Twelve Apostles. “The clouds were low and there was intermittent rain, but the moon was breaking through, and its light was dispersed by the clouds and the moisture of the rain. It conveyed a feeling of both reverence and awe. The noise from the homes was full of that wonderful family interaction that is so representative of the best of Christmas.”

Suddenly that changed. “We realized that almost every house had tuned their television sets to the same station. Harry Secombe, a well-respected British entertainer, began to sing in a fine tenor voice ‘Bless This House.’”

The words of the beautiful song “ascended upward” and bounced off the low clouds “radiating as if from heaven back to Earth.”

An overwhelming feeling of peace and appreciation came over the missionaries. “I felt the love of Heavenly Father for all of His children and how the Savior’s birth, example and Atonement would bless all of their lives. Most of all I was grateful that I had been called as a missionary and emissary of the Savior to bless Father in Heaven’s children.”

Speaking during a special Christmas morning devotional in the Provo Missionary Training Center, Elder Cook recalled his first Christmas away from home as a young missionary for The Church of Jesus Christ of Latter-day Saints.

Honoring Elder Cook’s precious memory, the Dec. 25 devotional included a special performance of “Bless This House.” The special number, sung by an MTC choir and directed by Ryan Eggett, featured a solo by Dallyn Vail Bayles.