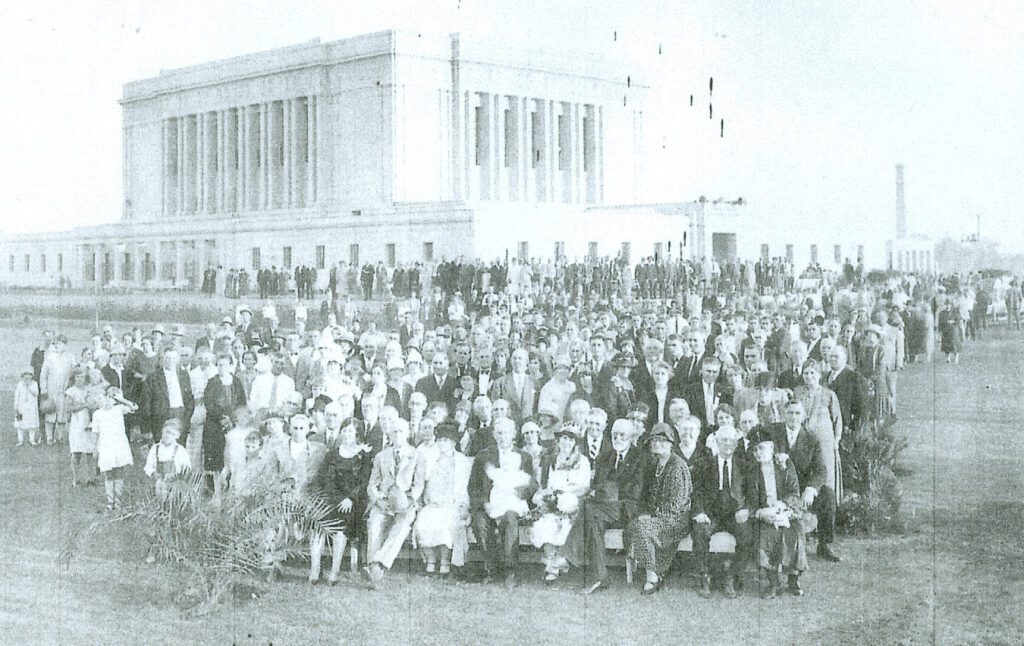 Years ago, Oakley J Ray was walking down the hallway of the old Mesa Arizona Temple Visitors’ Center, glancing at historic photographs of the temple’s construction and gatherings for its Oct. 23, 1927, dedication. He paused at one photo showing a large group of Latter-day Saints — some seated, many standing — on the grounds beyond the temple’s northwest corner and carefully eyed a young boy wearing a white shirt and overalls, standing behind a small, palm-like bush near the front of the photographed crowd.

“That little boy outside there is me,” he remembers saying after recognizing himself in the photo.

Ray, now 101 years old, can recall attending the 1927 dedication of what was then called the Arizona Temple, if not specific details of the event — mind you, it was more than 94 years ago. However, he does remember going to the dedication with his parents and siblings from their small farm in Gilbert, Arizona.

That dedication day is etched in colorized copies of photos that Ray and his posterity have preserved — the large gathering of leaders and Church members just beyond the Arizona Temple as well as of him, his father and his siblings together for a snapshot before heading off to the dedication.

And, yes, in that second photo, young Oakley stands front and center with his father, Sims Ray, and four siblings — and wearing a white shirt, overalls and a wide grin.

Of the dedication-day photo outside the temple, “There isn’t any question, that was me,” said Ray in a recent interview with the Church News.

Few can say they attended a temple dedication and are looking forward to attending the same renovated temple’s rededication decades later. But Ray is among the handful of Phoenix-area Latter-day Saint centenarians who can qualify for such a claim.