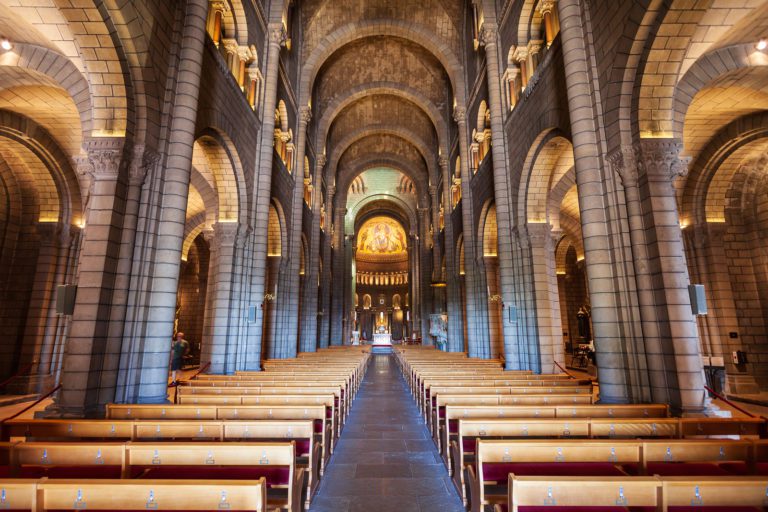 I published this article in Salt Lake City’s Deseret News on 11 March 2010:

During his forum address at Brigham Young University on Feb. 23, Francis Cardinal George, head of the United States Conference of Catholic Bishops, mentioned last year’s participation by President Thomas S. Monson and the Mormon Tabernacle Choir in the centennial celebrations for Salt Lake City’s Catholic Cathedral of the Madeleine.

He wondered aloud whether Brigham Young and Lawrence Scanlan, the first Catholic bishop of Utah, would have been shocked at such cordial relations.

The relationship between The Church of Jesus Christ of Latter-day Saints and the Catholic Church has obviously grown closer during recent decades, and not merely in Utah. The two churches increasingly work together on social issues, for example, and have long cooperated on humanitarian projects. But I suspect that President Young and Bishop Scanlan would have been less shocked than Cardinal George assumed. There is a story here that few Catholics and Latter-day Saints know.

By the late 1860s, Mormon isolation in Utah was ending. Jewish merchants and businessmen arrived, for instance, as early as 1854. Strong Jewish-Mormon friendships grew, and Brigham Young more than once opened Mormon church buildings to Jewish religious services.

In their turn, Catholics first came to Utah in 1862, as members of the California Volunteers. In 1866, when Father Edward Kelly sought a place to celebrate Mass, Mormon leaders permitted him to use the old tabernacle on today’s Temple Square, and Brigham Young helped him to obtain clear title to land for the first Catholic church in the city. On May 10, 1869, the Union and Central Pacific railroads met at Promontory Summit, not far from Brigham City, thus creating the first transcontinental railroad in American history and, with this, non-Mormon denominations began to establish themselves even more securely in Utah Territory.

Though Catholics and Latter-day Saints differed theologically, they were generally friendly with one another. Thus, for example, not long after then-Father Scanlan arrived in Utah in 1873, he was invited by Mormon leaders in St. George, to use their tabernacle for worship. However, he feared that some of the liturgy would need to be omitted since it called for a choir singing in Latin. But he was soon surprised to discover that the director of the St. George Tabernacle’s choir had ordered the appropriate music and was preparing his group to perform it, in Latin, in two weeks. Accordingly, on May 18, 1873, a Catholic high Mass was sung by a Mormon choir in the St. George Tabernacle.

Plainly, although none can deny some harsh rhetoric over the years, Mormon respect for Catholics long predates the 2009 centennial of the Cathedral of the Madeleine. In fact, it dates to the days of Joseph Smith himself. Referring to the mob burning of the Ursuline Convent near Boston in 1834, Joseph remarked:

“The early settlers of Boston … who had fled from their mother country to avoid persecution and death, soon became so lost to principles of justice and religious liberty as to whip and hang the Baptist and the Quaker, who, like themselves, had fled from tyranny to a land of freedom; and the Fathers of Salem, from 1691 to 1693, whipped, imprisoned, tortured, and hung many of their citizens for supposed witchcraft; and quite recently, while boasting of her light and knowledge, of her laws and religion, as surpassed by none on earth, has New England been guilty of burning a Catholic convent in the vicinity of Charlestown, and of scattering the inmates to the four winds; yes, in sight of the very spot where the fire of the American Independence was first kindled, where a monument is now erecting in memory of the battle of Bunker Hill, and the fate of the immortal Warren, who bled, who died on those sacred heights, to purchase religious liberty for his country; in sight of this very spot, have the religionists of the nineteenth century demolished a noble brick edifice, hurling its inhabitants forth upon a cold, unfeeling world for protection and subsistence.”

“The old Catholic church traditions are worth more than all you have said,” Joseph told his followers in a sermon delivered less than two weeks before he himself was murdered by a mob.

A strong foundation for friendship and respect toward Catholics was laid down in the earliest years of Mormonism.

I love this, I am a member but was married to a Catholic and I wish while he was still here he could have read this. He passed 3 yrs ago and I did get his work done in the Temple so I am sure he knows LOL. I shared it with my friend who is also Catholic he has been interested in what the Latter-Day Saints believe and so I have told him and I think he will enjoy reading this article also.

I am very interested in the source for the quote from Joseph Smith regarding the convent burning in 1834. That is a quote that should receive wider attention within the Church because it is such a clear demonstration of the wide vision that our prophet had from the very beginning. He was not just focused on unjust actions against member of the Church but also against other people and other religions and at other times. That is a distinct perspective that you simply don't find in charismatic leaders who have claimed they were prophets or should be given total loyalty as leader of a religious or even a non-religious organization. Very powerful.