Call me 'ze,' not 'he': University wants everyone to use 'gender inclusive' pronouns | Meridian Magazine 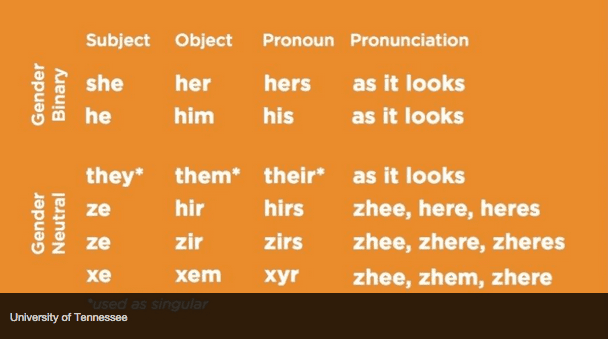 Call me ‘ze,’ not ‘he’: University wants everyone to use ‘gender inclusive’ pronouns

Educators in the Volunteer State are very concerned that students might be offended by the usage of traditional pronouns like she, he, him and hers, according to a document from the University of Tennessee – Knoxville’s Office of Diversity and Inclusion.

“With the new semester beginning and an influx of new students on campus, it is important to participate in making our campus welcoming and inclusive for all,” wrote Donna Braquet in a posting on the university’s website. “One way to do that is to use a student’s chosen name and their correct pronouns.”

Braquet, who is director of the university’s Pride Center, suggested using a variety of gender neutral pronouns instead of traditional pronouns.

“There are dozens of gender-neutral pronouns,” she declared.

For all you folks who went to school back when there were only him and her – here’s a primer: some of the new gender neutral pronouns are ze, hir, zir, xe, xem and xyr.

“These may sound a little funny at first, but only because they are new,” Braquet explained. “The ‘she’ and ‘he’ pronouns would sound strange too if we had been taught ‘ze’ when growing up.”

Somehow I sincerely doubt that, but whatever. Anything goes for the sake of inclusivity, right?

He/She, They Them must really be bored with Their lives. They have nothing better to do that to make the American language more difficult. Maybe they should be put to work sweeping floors for a while or maybe just go back to kindergarten for a while.

This is not new, its just more pronounced and mainstream due to the attention the topic gets. In 2004 or so the cultural trainings for those who may work with the lgbt community were using something similar. Aside from the direction the world is taking, I dislike the inflammatory nature of the author's article. The Brethren have instructed us well to stand on correct principles, and, accept others. In other words, love the sinner not the sin.