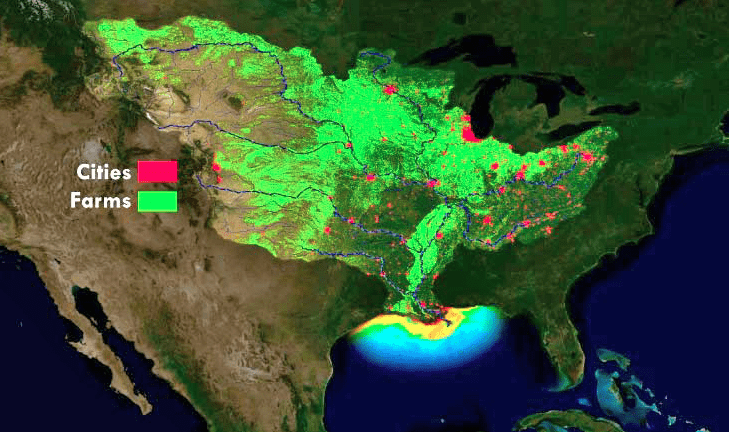 Along the northern edge of the Gulf of Mexico is a 6,000-square mile dead zone of oxygen-depleted water filled with dead plants, dead fish and a damaged ecosystem.

Dead zones like this occur when nitrogen and phosphorus from agricultural fertilizers and sewage washes downstream into the ocean and creates huge blooms of toxic algae. Sadly, there are hundreds of them around the world.

Microbiologists at BYU, with financial backing from the National Science Foundation and the U.S Dept. of Agriculture, are addressing this global environmental issue by getting to the root of the problem.

Their research, the most recent of which publishes this week inProceedings of the National Academy of Sciences, is discovering the potential of naturally-occurring bacteria called rhizobia to stem the tide of oversaturation with nitrogen-based fertilizers.

“If we can find better ways of getting nitrogen to plants, then we can improve the environmental impact of farming,” said Paul “Skip” Price, lead author of the new BYU study. “We want to improve this process so we don’t have to add as much fertilizer to fields. With active rhizobia, we can have productive crops while still protecting the environment and keeping our waterways safer.”

Confused? OK, here’s some quick Microbiology 101 for you:

One of the most important (and most limiting) nutrients for plants is nitrogen, but a plant’s ability to process it naturally from the atmosphere depends on tiny bacteria called rhizobia.

Rhizobia do their magic by attaching to a plant host—usually inside tiny nodules on the plant’s roots—and teaming up with the plant to “fix” nitrogen (turn nitrogen gas into a consumable form). It’s a friendly, symbiotic partnership that helps big crops like soybeans, alfalfa and peas grow.

Rhizobia are particularly key because when they’re functioning at a high rate, farmers can reduce the amount of nitrogen-based fertilizer they put in the soil. Less fertilizer means less nitrogen in the water runoff, and therefore, less algae growth that depletes ocean oxygen supplies.

The rhizobia expertise of Price, a postdoc, and BYU professor Joel Griffitts has caught the attention of the USDA to the tune of a $450,000 grant, in addition to the $650,000 NSF grant that helped fund early stages of the research. Specifically, they’ve been tasked with studying the effects of HrrP, a gene that can switch rhizobia from plant pal to plant parasite.

“When this happens, the plant gets no benefit and the rhizobia behave more like a disease,” said Griffitts, associate professor of microbiology and molecular biology. “A single gene makes all the difference.”

According to Griffitts, plants use a complex vocabulary of chemicals called peptides to “speak” to rhizobia as the bacteria enter the root cells. Those bacteria normally obey the plant’s commands. But HrrP, the new gene they’ve discovered, causes some bacteria to ignore the commands.

“Instead, these bacteria end up living a very self-centered existence,” Griffitts said.

For Griffitts, Price, two undergraduate researchers and colleagues at MIT, the findings are fascinating in that they show how easily bacteria can switch from being beneficial to harmful. It also represents another step toward understanding the chemistry behind what makes productive relationships between big organisms and tiny microbes succeed or fail.

Great info! I hope that something can be done to reduce fertilizer use before we all die of allergic reactions to all the poison that is being put on the fields and inevitably at some point ends up in the water. I have aa feeling that some of the ocean pollution is already killing so many species, is a result of men messing with the natural growth cycle of plants (more fertilizer, more pesticides for higher yields). A re-thinking appears to have become necessary.