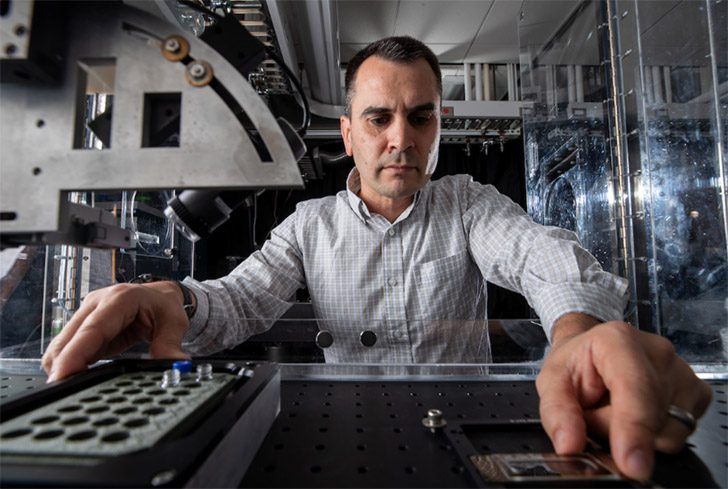 Monitoring cancer can often be an intrusive and exhausting process for patients. But with BYU chemistry professor Ryan Kelly’s new research, there is hope for a simpler way: No more biopsies. No more spinal taps. Instead, patients may be able to take a simple blood test to diagnose, monitor and tailor appropriate therapies for various cancers.

Creating therapies for cancer patients is greatly enhanced when doctors know about the biochemical makeup of tumors, including what proteins are present and at what levels. For this project, recently published in top-ranked journal Analytical Chemistry, Kelly collaborated with researchers from the Pacific Northwest National Laboratory and Oregon Health & Science University to isolate circulating tumor cells (CTCs) from blood and determine which proteins were present.

Their technique uses a new technology, called nanopots, to capture more protein information from a single cell than ever before.

CTCs are extremely rare cells that have shed from a tumor and are carried around the body, acting as seeds for the growth of additional tumors in distant organs. Traditionally, learning about the protein makeup of a blood or tissue sample has required thousands or millions of cells. Because CTCs are so rare, their proteins could not be studied.

“It used to be that the only thing you could do with CTCs is count them, which would usually correlate with cancer,” said Kelly. “But it’s not always effective. We want to get beyond that.”

By measuring the proteins in CTCs, physicians will be better equipped to know what is working with a therapy regimen and continue or modify treatment accordingly.

“Targeted approaches for studying proteins from single cells have been around for a while, but the problem is you have to know exactly what you’re looking for,” Kelly said. “What we are doing is cataloging as many proteins as possible from single cells, without having to pick what we’re looking for beforehand. Nobody’s done that before with small numbers of CTCs.”

The research team hopes CTCs can eventually serve as a “liquid biopsy” by providing information about the tumors from a simple blood test.

“We would like to know how a therapy is impacting a cancer without having to do an invasive biopsy every time,” Kelly said. “We’re excited about the implications this could have in the long run for cancer diagnosis, treatment and the development of new therapeutic approaches.”

God, the Father and Jesus Christ Reveal Themselves to Many in the Kirtland Temple