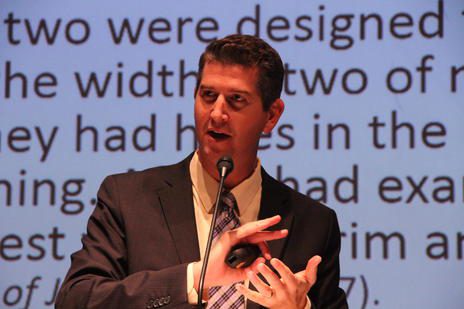 While not denying that the Book of Mormon is extraordinary, some people today have tried to “bridge a middle ground” by saying it is “inspired fiction,” the product of Joseph Smith’s imagination. That explanation for the book’s origin does not work, said Anthony Sweat a speaker on Oct. 24 at the Sidney B. Sperry Symposium.

Brother Sweat, a member of the BYU religion faculty and a former teacher and administrator with Church seminaries and institutes, spoke on the theme “Hefted and Handled: Tangible Interactions with Book of Mormon Objects.”

“The sacred-fiction theory says the Book of Mormon is ‘true’ in the sense that it leads people to do good things, be virtuous and live good lives,” he said. “They view it as ‘inspired fiction,’ that God inspired Joseph Smith to work up this record but that its not actual, tangible, real history,” he explained.

“The problem with that, though, is that is not how Joseph Smith explained the Book of Mormon. … He begins the story of the Book of Mormon by talking about physical relics, actual stones, actual relics that he pulls out of the ground, characters that he actually copies down and looks at.”