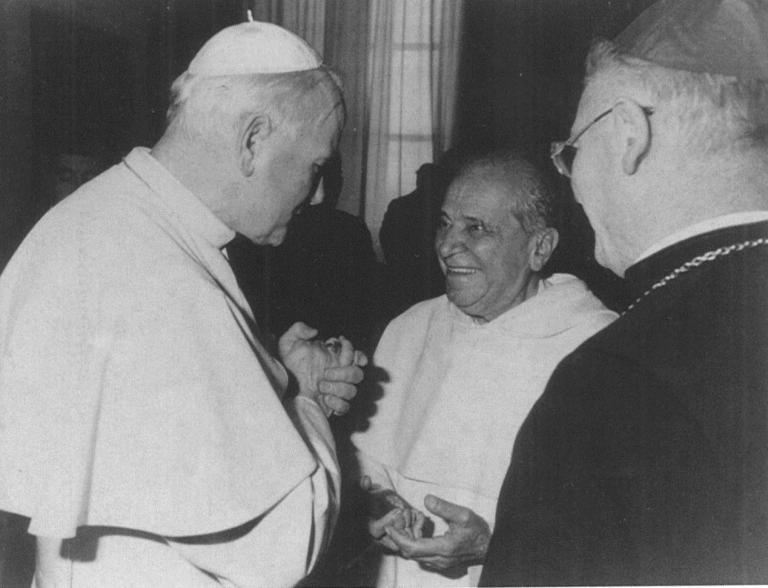 I think that it was Elder Quentin L. Cook of the Quorum of the Twelve who, in the second to the last talk of the just-concluded October conference of the Church of Jesus Christ of Latter-day Saints, knowing that the concluding speaker would be President Russell M. Nelson, bore his testimony that President Nelson is, in our time, the chosen prophet of God for the entire world.  It’s a breathtakingly grand claim.  And it powerfully reminded me of an experience that I had back when I was studying in Egypt as a still relatively young man.

One of the most memorable experiences of my life, and certainly of the years that I spent living and studying in Cairo, was the six months or so that I studied Islamic philosophy, one on one, with Father Georges Anawati OP (1905-1994) of the Institut Dominicain des Etudes Orientales.

He was a wonderful person.  Once, having bought and just begun to read a book by F. E. Peters of New York University, I noticed that it was dedicated to Father Anawati, “of the Dominican Institute and the Kingdom of God.”  I was so pleased at that dedication that I located Professor Peters’s office telephone number and called it, thinking to leave a message of gratitude.  It was late at night in Utah and early in the morning in New York City, but, to my surprise, Professor Peters was in his office and answered the phone.  We reminisced for about twenty minutes about our mutual friend, who had passed away several years before.

Here, though, is the experience that I specifically wish to share:

One day, while I was reading through a text with him at the Institut Dominicain des Etudes Orientales, which was housed in a Dominican monastery in Cairo, it suddenly hit me how wildly unlikely it was that the claims of the Church of Jesus Christ of Latter-day Saints were uniquely true.  Here I was, studying the sophisticated intellectual products of one of the world’s great religions, Islam, with a Dominican priest and monk, an internationally prominent scholar, theologian, and philosopher, who, as such, was a sophisticated representative of another of the world’s great religions, Catholic Christianity.  Even at that time — it has grown enormously since then — Greater Cairo alone was fifteen to twenty times the size of the metropolitan Salt Lake City area and very few Latter-day Saints, almost all of them expatriates in those days, lived there.

Islam, as we know it, is nearly a millennium and a half old.  Catholicism claims a heritage of two thousand years.  By contrast, during the months that I was studying with Father Anawati, the Restoration was about a century and a half old.  For most of that time, our people had been a small and isolated group out in the Great Basin West, preoccupied with digging irrigation canals and building little settlements in a demanding, remote, semi-arid landscape.

Provincial and tiny in number, we had made few if any notable contributions to world culture.  Thomas Aquinas, Ibn Sina, Albertus Magnus, al-Farabi . . .  No Latter-day Saint has yet managed to enter that pantheon, even today.  Nor even close.

And yet . . .  And yet . . .  It occurred to me almost immediately that my feelings at that moment must not be altogether different from those that an early Christian might have held at roughly the dawn of the third century.  In 200 AD, Michelangelo, Dante, Augustine, Milton, Handel, Kierkegaard, and the host of other great Christian thinkers, composers, writers, and artists yet to come were still far, and sometimes very far, in the future — and, in a sense, essentially inconceivable.  The proportion of the population of the Mediterranean basin that was Christian at the beginning of the third century AD — to say nothing of the proportion of the inhabitants of the globe overall — was still negligible.  That Christianity would expand to be a major world religion wasn’t yet at all obvious.

The mood passed quickly.  But I’ve never forgotten it.  However, I don’t worry about the issue much.  Have we climbed to the summit of world culture and science yet?  Probably not.  But good things will come, in their time.  Have we converted the entire world?  Not even close.  But we’ve spread throughout much of it.  The global expansion of the Church was manifest, in fact, at this weekend’s General Conference, with speakers not only from North America but South America, Europe, Asia, and Africa, and eighteen new temples announced, not only in Florida, Michigan, Nevada, Texas, and Washington, but in Korea, the Philippines (2), Nigeria, Peru, Argentina, Brazil (2), Guatemala, and Mexico (4).  Nobody from Australia or New Zealand spoke this time, but somebody from Oceania easily could have spoken, since they are represented in the Church’s senior leadership.  (No Antarcticans have yet been called to the ranks of the General Authorities, of course — which is an ongoing scandal that is yet to be fully exploited against us by our critics.)

“We will yet have Miltons and Shakespeares of our own,” predicted the future apostle Orson F. Whitney in June 1888.  “God’s ammunition is not exhausted. His brightest spirits are held in reserve for the latter times. In God’s name and by his help we will build up a literature whose top shall touch heaven, though its foundations may now be low in earth. Let the smile of derision wreathe the face of scorn; let the frown of hatred darken the brow of bigotry. Small things are the seeds of great things, and, like the acorn that brings forth the oak, or the snowflake that forms the avalanche, God’s kingdom will grow, and on wings of light and power soar to the summit of its destiny.”