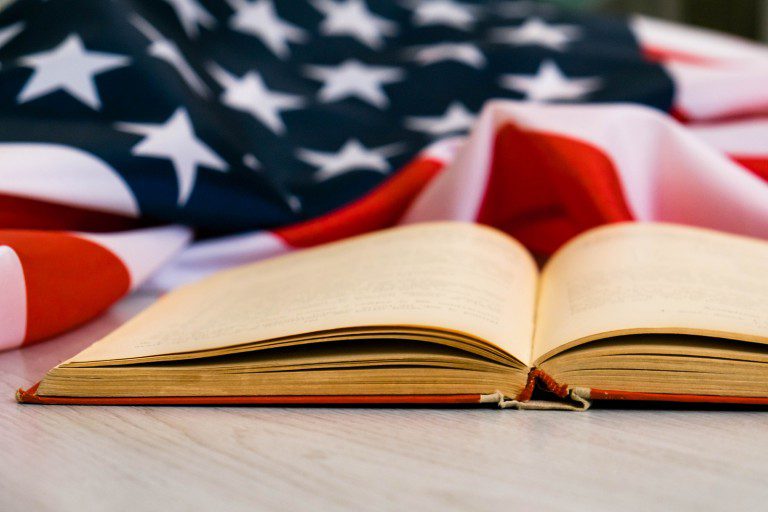 Independence Day, July 4, will soon be here. I have gathered several books to help kids reflect on, and appreciate our freedoms, and our military and all those who committed the ultimate sacrifice for and on behalf of our country. The age appropriateness will be indicated on each book’s review.

Thomas Paine and the Dangerous Word, by Sarah Jane Marsh, and exquisitely illustrated by Edwin Fotheringham, begins with an insightful statement that sums up this great man’s life: “Nobody expected much of young Thomas Paine”. He was born and raised in England where he was supposed to follow in his father’s footsteps at the corset shop. But a chance meeting with Benjamin Franklin changed his life and motivated him to go to America. His love of the written word and the power it holds brought about the most read booklet, “Common Sense”. This booklet helped ignite the American Revolution and put fire in the belly of frustrated Americans. The picture book shows Fotheringham’s wonderful digital art which perfectly demonstrates the struggles of the day. But Thomas Paine’s courage and incredible ability to express through the written word what the people in this country felt at the time is a brilliant historical account. Be sure to check out more information about Paine as well as the time-line of his life found at the back of the book. This book is perfect for ages six through teens.

Siege: How General Washington Kicked the British Out of Boston and Launched a Revolution, by Roxane Orvill, is a historical account of a little told story in the Revolutionary War. It’s an account of when Washington forced the British out of Boston. But here’s the twist: it’s completely written in verse. Orvill’s selection of words is minimal, rich and full of history – making it more readable. It becomes crystal clear that Washington (who had just been made the General of the meager army) was about to pull the wool over the British eyes by setting out the offense. This book is so well thought out and layered out that kids, ages ten through teens, will really capture the spirit of and the miracles that helped America defeat the greatest army in the world. Even the most reluctant reader will thoroughly enjoy this book! There is also an extensive bibliography, source notes and glossary found at the back of the book.

This is our Constitution: Discover America with a Gold Star Father, by Khizr Khan, is a celebration of what makes America unique, strong and free. Throughout this non-fiction, Khan explores why we need the constitution, the meaning of it, the actual Declaration of Independence, the Constitution, Landmark Supreme Court Cases and more. The author grew up in Pakistan and moved with his wife to America. Living outside of this country, as well as losing a military son while serving in Iraq, has made this country especially magnificent to him. This is a great read for ages ten and up.

Action Presidents #1: George Washington!, and Action Presidents #2: “Abraham Lincoln!, both books by Fred Van Lents, and illustrated with a great amount of humor by Ryan Dunlavry, is a new series that is both historical and funny; both interesting and engaging. This graphic novel is perfect for kids, ages nine and up, who don’t seem interested in history, especially American history. The succinct text and dexterity of arresting pictures make for a terrific read!

I rarely review graphic novels because fewer pictures enlarge the imagination. But both of these books truly keep kids reading to the end. You will be surprised what facts they learn about both these presidents.

God Bless America: The Story of an Immigrant Named Irving Berlin, by Adam Nuchi, and perfectly illustrated by Rob Policka, is a picture book, geared for ages six through adult, about how a persecuted Jew who immigrated from Russia to New York City composed one of America’s favorite patriotic songs! Irving wrote this famous anthem in 1918, but then set it aside. He brought it back out just before World War II because he felt the country desperately needed it.

The book is also about his life and the many wonderful and uplifting songs that he composed. Be sure to check out the interesting time-line of his life found in the back of the book.

Voices From the Second World War: Stories of War as Told to Children of Today, published by Candlewick Press, is a collection of memoirs of firsthand accounts of survivors from this devastating war. The war ended more than seventy years ago but these accounts must live on in order not to be repeated. There are photos found throughout that bring these stories to life. The book is also full of stories about Western Europe, the Holocaust and Japan, and is good for ages ten through adult.