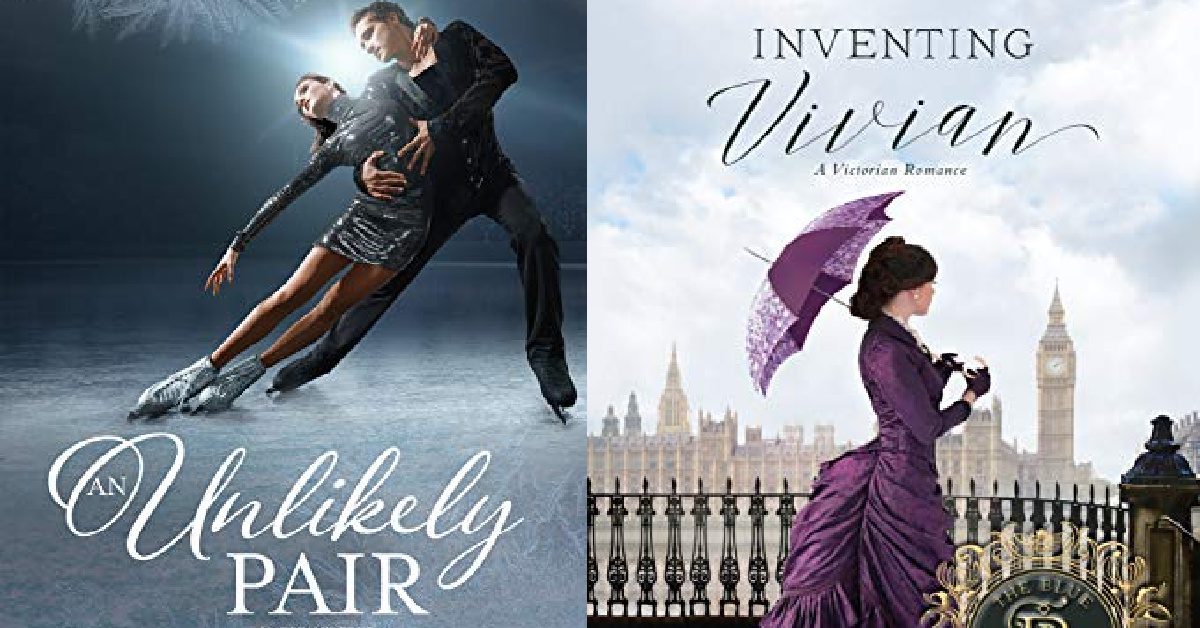 Two highly esteemed writers take us beyond great romances to stories of talented women who excel in their chosen fields while still experiencing the thrill of falling in love. In An Unlikely Pair Tracy Hunter Abramson introduces a ballerina who switches to pairs figure skating and in Inventing Vivian Jennifer Moore delivers a mystery in the second volume of the Blue Orchid Society Victorian mystery series.

Traci Hunter Abramson’s newest book An Unlikely Pair is the second volume in her Dream’s Edge series and stands alone very well. Readers who love her intrigue, mystery, law enforcement, and suspense novels will find this book a drastic change of pace. Even without any secret agents, this is a totally captivating and enjoyable story that delves into one of the author’s major interests; the world of sports. In this case, ice skating.

Amaliya Marcell is the daughter of two famous sports figures. Her father, a renowned hockey player turned coach and her mother, a top Russian ballerina who defected to the United States, have taught her to excel in both areas. With high school graduation just a few months away, Amaliya is set to follow in her mother’s footsteps. A terrible accident changes her plans. Both parents are seriously injured and will spend months in a New York hospital. Friends of her parents who live in Connecticut invite her to live with them for her last semester of school, enabling her to be closer to her parents.

After narrowly missing his chance at the US national figure skating championship, Tyler Linden faces another disappointment when his sister and skating partner notifies him she is retiring from skating. There’s little chance he can find another partner who can qualify. He suffers through weeks of qualification trials, then one day he notices a beautiful young woman at the local ice rink and is impressed by her poise and style. He invites her to skate with him, then to become his pairs partner. Though she has skated nearly all of her life, she has had little figure skating training, but much of her ballet training adapts to figure skating. Their coach and some of the other skaters scoff at the likelihood of her being ready for competition, yet there is something magical between Amaliya and Tyler that keeps them believing in themselves and each other.

Abramson has the ability to create characters that are both believable and somehow larger than life. Readers will find themselves cheering on these two young skaters both in their sport and in the relationship growing between them. Her parents’ battle with horrible injuries and paralysis is a story in its own right. The assistance and support of friends is another important element of the story. The settings in Washington D.C., New York, and Connecticut are well done. Most of the action takes place in skating arenas and homes. The story not only advances following a comfortable plot arc, but there is a second arc showing the emotional growth that takes place in the hearts and minds of Amaliya and Tyler.

Traci Hunter Abramson was born in Arizona. She lived for a time in Venezuela for a study-abroad program, then enrolled at Brigham Young University. After graduating she worked for the Central Intelligence Agency. After resigning to raise her family she became a high school swim coach. Of her more than 30 published novels, seven have earned her Whitney awards and two, 2017 and 2019, were named Best Novel of the Year.

Vivian Kirby is not your usual Victorian miss. She has no interest in fancy balls, catching a husband, or the accepted social graces expected of a young lady of that era. Her interests lie in chemical equations, innovative inventions, and scientific research. Her dream is to win the International Exhibition of Industry and Science. An unpleasant experience at a ball leaves her attempting to hide in the library where she meets a few other young women who are avoiding the ball. They become friends and form a support group they call The Blue Orchid Society.

When he was younger, Lord Benedict caused Vivian’s expulsion from a scientific group. Years later, after an extended stay in China, he has changed and would like to make up for his earlier action. He becomes her secret sponsor for the Exhibition. When a dear friend is arrested for a murder he didn’t commit, they become allies in searching for the real murderer. The Blue Orchid Society assists them.

Can romance flourish between two people who are such complete opposites? Will their differences tear them apart or do two opposites form a strong whole?

Inventing Vivian is a light, fun read. The characters are likable and serve well to illustrate the changing perspective of the role of women during the Victorian era as the strict limitations of the Regency period began to give way to the beginning of greater freedom for them. Some of the characters also show how much license royal titles still gave men to do as they pleased. The setting for the story is Nineteenth Century England. Moore has done well in incorporating the daily tasks, transportation, and the stark differences between the rich and poor into the story. The plot arc holds the reader’s attention from start to finish.

Jennifer Moore is married and the mother of four children.  She has a BA degree from the University of Utah. She has over a dozen published novels to her credit.