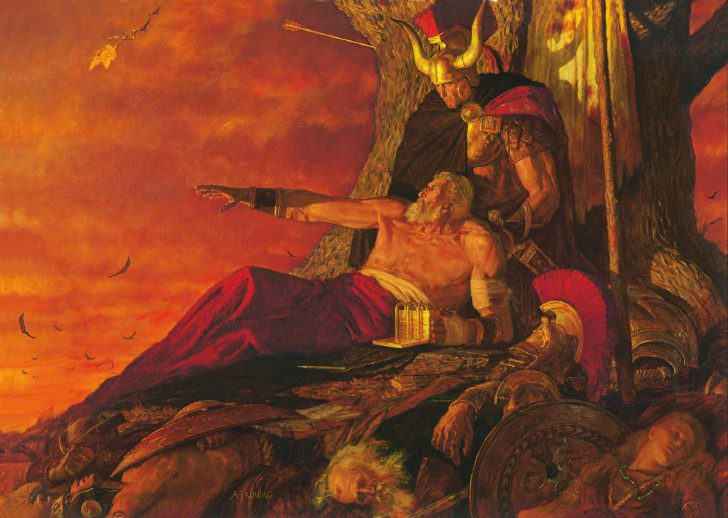 Meridian has long given gospel doctrine lesson helps. This year we will be adding short Book of Mormon extras to add a specific insight to the lesson that might aid your study.

It is a sobering thing to receive a book of scripture from a prophet who has seen our day and has chosen every passage and every event in the narrative as a preparation, witness and warning for us about what is to come. If you had read somewhere that an ancient book had been found, written by someone who had seen the future and had an urgent message for us, you would think that it would be the top of the New York Times best seller list. You would suppose that people everywhere would comb its pages trying to understand their own times in parallel with the conditions portrayed in the book.

That doesn’t happen, but Latter-day Saints can study the book with that urgent insight before them. Mormon tells us several times things like this: “there cannot be written in this book even a hundredth part of the things which Jesus did truly teach unto the people” or as he finishes his record, “I cannot write the hundredth part of the things of my people” (3 Nephi 26:6, Words of Mormon 1:5).

If you can write only a hundredth part, when you are surrounded by stacks of records of your people, how do you make the editorial choice? Moroni tells us that choice was made based on the needs of our time.

Moroni saw our times as well and warned: “Behold, I speak unto you as if ye were present, and yet ye are not. But behold, Jesus Christ hath shown you unto me, and I know your doing” (Mormon 8:35).

This is how he describes our world and times. It is a place where people believe there are no more miracles, a time of darkness and secret combinations, an era when the power of God is denied and churches are corrupted, a time of wars and rumors of wars, a period marked by materialism, murders, lyings and deceivings. He continues, but we get the idea.

So what do we see in the book? The conditions that led to the decimation of two nations and a call to us to be wiser. It is as if the story of the utter downfall of one nation is not enough, and we must be shown the grisly pattern a second time. It is the story of how certain philosophies—like Nehor’s—brings about destruction. Most of all, however, it is the marvelous testimony of the power of Jesus Christ and His being the true source of our safety.

We see a people preparing to meet Him and we see very clearly that God remembers his covenants through all generations of time. Man might forget them, turn from them, rebel against them, but God’s promises are absolutely certain and sure to those who steadfastly hold on to their covenants. This is true no matter how dangerous the times are.

In the Title Page of the Book of Mormon, we are told that one of the purposes of the book is “that they may know the covenants of the Lord, that they are not cast off forever”. This was not just vital to the Book of Mormon peoples and to us, but quintessential. They needed to know that even though they were far from Jerusalem, though they as descendants of Joseph were “a fruitful bough…whose branches run over a wall”, they were not forgotten and that the covenant promises still applied to them. (Genesis 49:22).

Those covenant blessings included protection and prosperity, among many other things. The covenant is a source of safety and ultimate security available in no other way. Though the Book of Mormon teaches so many ideas, it champions the importance of covenants with the Savior’s atonement at the very center.

Moroni, who saw our day, wanted us to know that more than anything else.

I've always wondered what I would choose to include, especially considering how hard it was to write anything. It's one thing for us to type something or write it on a piece of paper, but engraving it upon plates? That's a whole other ballgame! It really reminds me that everything in the Book of Mormon must be important, because there was no room, time or energy to include anything that wasn't essential. I love the Book of Mormon!

I often think about the burden on Mormon and Moroni's shoulders in compiling and then sealing up the records. Not only did they see our day but they witnessed the destruction of their own people. Mormon's lament, "Oh my people..." is one of the most tragic ever. And then they saw it happening all over again in our day. I can imagine they were very careful to try to give us the most precious parts to give us the message they wanted to convey, as Sister Proctor indicated.