Near Collision of Massive Solar Flare with Earth | Meridian Magazine 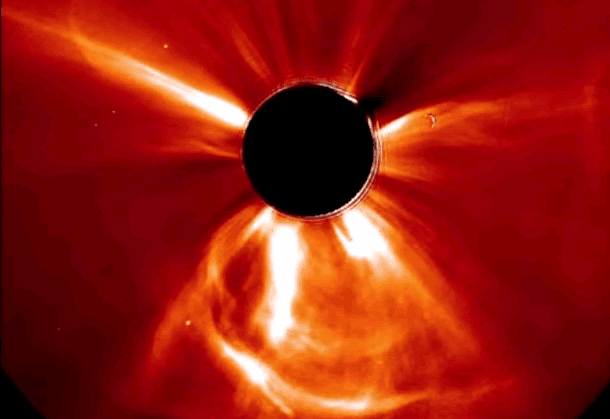 Near Collision of Massive Solar Flare with Earth

A massive coronal mass ejection (CME), a giant solar flare, narrowly missed the earth two years ago on July 23, 2012. Physicist Daniel Baker said that “if the eruption had occurred only one week earlier, Earth would have been in the line of fire.”

“Analysts believe that a direct hit … could cause widespread power blackouts, disabling everything that plugs into a wall socket. Most people wouldn’t even be able to flush their toilet because urban water supplies largely rely on electric pumps. … The total economic impact could exceed $2 trillion or 20 times greater than the costs of a Hurricane Katrina. Multi-ton transformers damaged by such a storm might take years to repair.”

Had it hit directly, this event could have been very similar to the coronal mass ejection of September 1859, called the Carrington solar storm that “caused global telegraph lines to spark, setting fire to some telegraph offices.” This event was before the electrification of our modern era but shows that a direct hit from such an event is not only possible but has happened in the recent past. There is an estimated 12% chance of this kind of event in the next 10 years, according to Pete Riley of Predictive Science Inc.

The Lord has said that there is a direct correlation with wickedness in the world and the calamities that will come upon the world in the latter days. He has not declared that the internal combustion engine or coal fired power plants will be the cause of the last-days events that He controls.

“And the anger of the Lord is kindled, and his sword is bathed in heaven, and it shall fall upon the inhabitants of the earth. … For they have strayed from mine ordinances, and have broken mine everlasting covenant; They seek not the Lord to establish his righteousness, but every man walketh in his own way, and after the image of his own god, whose image is in the likeness of the world, and whose substance is that of an idol, which waxeth old and shall perish in Babylon, even Babylon the great, which shall fall.

“Wherefore, I the Lord, knowing the calamity which should come upon the inhabitants of the earth, called upon my servant Joseph Smith, Jun., and spake unto him from heaven, and gave him commandments; … Search these commandments, for they are true and faithful, and the prophecies and promises which are in them shall all be fulfilled.” (D&C 1:13, 15-17, 37)