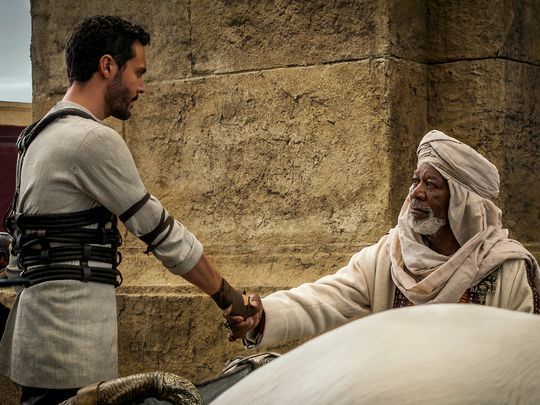 A Jewish prince seeks revenge on the adopted brother who betrayed him into slavery, but encounters with Jesus Christ teach him a better way.

Watching the new Ben-Hur is like attending a concert by a decent cover band. The material is familiar and beloved with good reason, the right notes are being hit, the right words are being said, and it’s pretty good… but can’t hold a candle to the original. True, the classic 1959 Charlton Heston version was itself a remake (and all are adapted from the Lew Wallace novel), but having won a dozen Oscars it’s rightly considered the gold standard for this story. It told the tale in three and a half hours; this version takes just two, making certain subplots feel rushed and certain emotional payoffs less powerful than they could be.

Still, this is an excellent story and it would take more than pacing issues, along with this film’s over-reliance on handheld camerawork and frantic editing, to derail it. In the title role Jack Huston is no Heston; he doesn’t have the gravitas or the range, but his relationships with his adopted brother Messala (Toby Kebbell) and his wife Esther (Nazanin Boniadi) are well-drawn and elicit audience investment. The action is exhilarating, especially the climatic chariot race. Morgan Freeman is excellent (as always) in his supporting role.

Unfortunately the role of Jesus Christ in the story is given short shrift here. He was always a peripheral character in Ben-Hur, but the decision to show his face demands that he be developed more as a character. All told this isn’t the film the story deserves, but neither is it the train wreck Rotten Tomatoes would have you believe. It’s definitely worth a rental, but if your jonesing for an excellent biblical film watch the original or this year’s Risen.

Ben-Hur is rated PG-13. There is plentiful action violence, with persons shot in the neck and chest with arrows, stabbed with swords, burnt with oil, lit on fire, and trampled/crushed in a chariot race. Persons are whipped as they row a boat. Jesus Christ hangs upon the cross. A husband and wife kiss fervently and are later shown in bed together (shoulders-up view, talking after making love). A non-believer uses the Lord’s name in vain several times.

Do not value pride or position over family. Revenge and hatred only lead to emptiness and heartache (see Alma 41:10). Forgiveness and love are the path to peace and joy (see Matthew 5:44; Matthew 6:13-14).

Jonathan Decker is a licensed marriage and family therapist available for online sessions throughout Utah and face-to-face sessions in St. George. He was the co-host of The KJZZ Movie Show, winner of the campus-wide BYU Talent Show, performer with Divine Comedy, and star of numerous independent action-comedies. His book 250 Great Movies for Latter-day Families is now available in paperback and Kindle. You can see him on multiple panels in September’sSalt Lake Comic Con. For Jonathan’s relationship tips and family movie reviews please visit yourfamilyexpert.com.

A stingy C+??? Really? My husband and I both enjoyed this movie and I would give it a B+ at the very least! The only complaint I have is that it was too long and could use some good editing. We need MORE movies like this that actually teach principles like forgiveness, mercy and family love.

Having not seen the original with the exception of the chariot scene - I liked this version. I think Morgan Freeman could have done a little more than dress up for his part - but I give it a pass. My wife however grew up on the original and said the same thing - its not as good. Her summary was that it was rushed or everything was condensed for the sake of time. I consider this the Readers Digest version of Ben Hur.