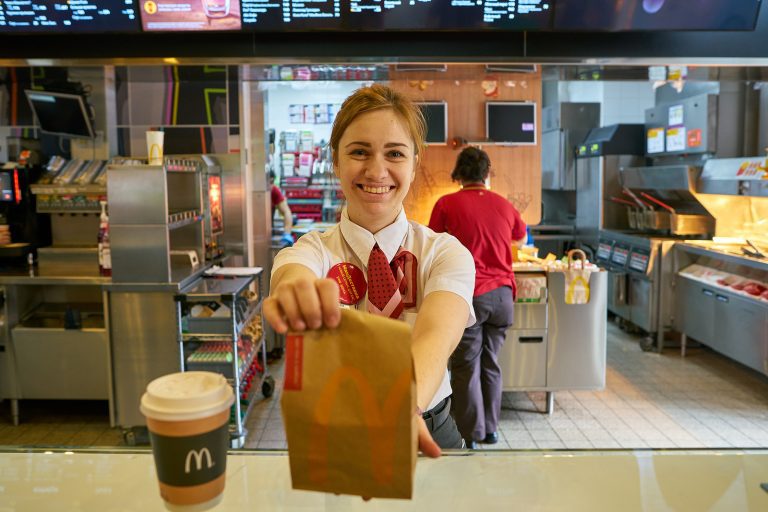 Jan worked at a fast-food restaurant. Most of the workers were like her—college students with very little money, trying to make ends meet. She didn’t mind the long hours and hard work. Most of the other employees were kind, and they got along well. But there was one thing that she really hated. It was when a customer came along who acted like she, or one of her coworkers, was nothing because they had to work at this type of job.

The worst person was a man who went by the name of Guy. Jan knew that wasn’t his real name. He was a state politician and felt that made him privileged. Jan had seen Guy’s impatience when the line was long. Even though they were moving food through quickly, Guy still felt it was the worker’s fault when he had to wait more than a couple of minutes.

Jan knew she wasn’t the only one who dreaded dealing with Guy. The minute he came in the door, everyone immediately found something to do so they wouldn’t have to take his order. But this time, when Guy came in, Jan was the only one on ordering, and she knew she would have to deal with him.

To make matters worse, there was a new manager. Word was that Tess had been a manager in a tough, inner-city restaurant and had transferred here to go to school. So, Jan was sure Tess had never met Guy before. Managers experienced with Guy would not take his negative remarks about an employee seriously. But a new manager might, and she might put that in the employee file.

Guy came to the ordering counter. Even though her heart was trembling, Jan put on her best smile and asked, “What can I get for you?”

Guy ordered, and Jan read the order back to him. True to form, he was annoyed.

“Can’t you people get anything right? I ordered a large fry.”

Jan knew for sure he hadn’t, but she punched it in. She again read it back to him. He rolled his eyes and spoke in a loud, demeaning voice.

“Are you stupid or something? You didn’t mark extra ketchup like I said.”

Guy then proceeded to berate Jan, saying that her uselessness was why she worked there and would never work anywhere else. Jan knew Guy had said nothing about ketchup. She tried to speak, to tell him she would correct it, but her voice wouldn’t work. She could feel her emotions getting the best of her as she tried not to cry.

Suddenly, Tess was by Jan’s side. She looked at Guy and said, “What did you call her?”

Guy unashamedly said, “I said she was stupid and couldn’t get the order right. And that she would never do anything but a worthless job like this. If it weren’t for people like me, people like you wouldn’t even have a job.”

“You’ve got that wrong, mister,” Tess said. “If there weren’t people like us serving food and doing this kind of work, there wouldn’t be people like you. And furthermore, we don’t have to take your abuse. You can just go somewhere else to eat.”

Guy was furious. “I want to talk to your manager!”

“I am the manger!” Tess replied. “And you can just take your hoity-toity attitude and leave! And if you get hungry, you can just chew on your better-than-others feelings until you get full of yourself, which shouldn’t take long, because you appear to be mostly there already!”

Guy glared at Tess, but Tess met his glare with one of her own and didn’t back down, even though she was half his age. But then something else happened. Another regular customer, who had seen this play out with Guy many times, stood and began to clap for Tess. Others in the restaurant joined him.

If there was one thing that could change the attitude of someone like Guy, it was community disapproval. When he saw how others felt about his treatment of Jan, he looked like he could crawl into a hole in the floor. When the clapping died down, Guy even apologized. Then he asked, “May I please still order?”

Tess nodded to Jan, and Jan finished the order without another word from Guy.

And Jan knew that she and Tess were going to be best friends.

I have the impression it is more difficult than ever to work in customer service right now which is good motivation to be extra patient these days. A child abuse prevention program I worked with in the past taught kids to counter bullying and learn to stand up for themselves and others (peer support), listen to their feelings and go to trusted adults for help if needed, among other concepts. The program was for kids and the adults in their lives. Another side of this issue is that holding someone accountable for abusive behavior sets a boundary and signals the need for change. Everyone should have such a manager!

I love this story!! More people should speak up when someone is being wronged.