Because They Love Us: “Family Angels” that Intervene | Meridian Magazine 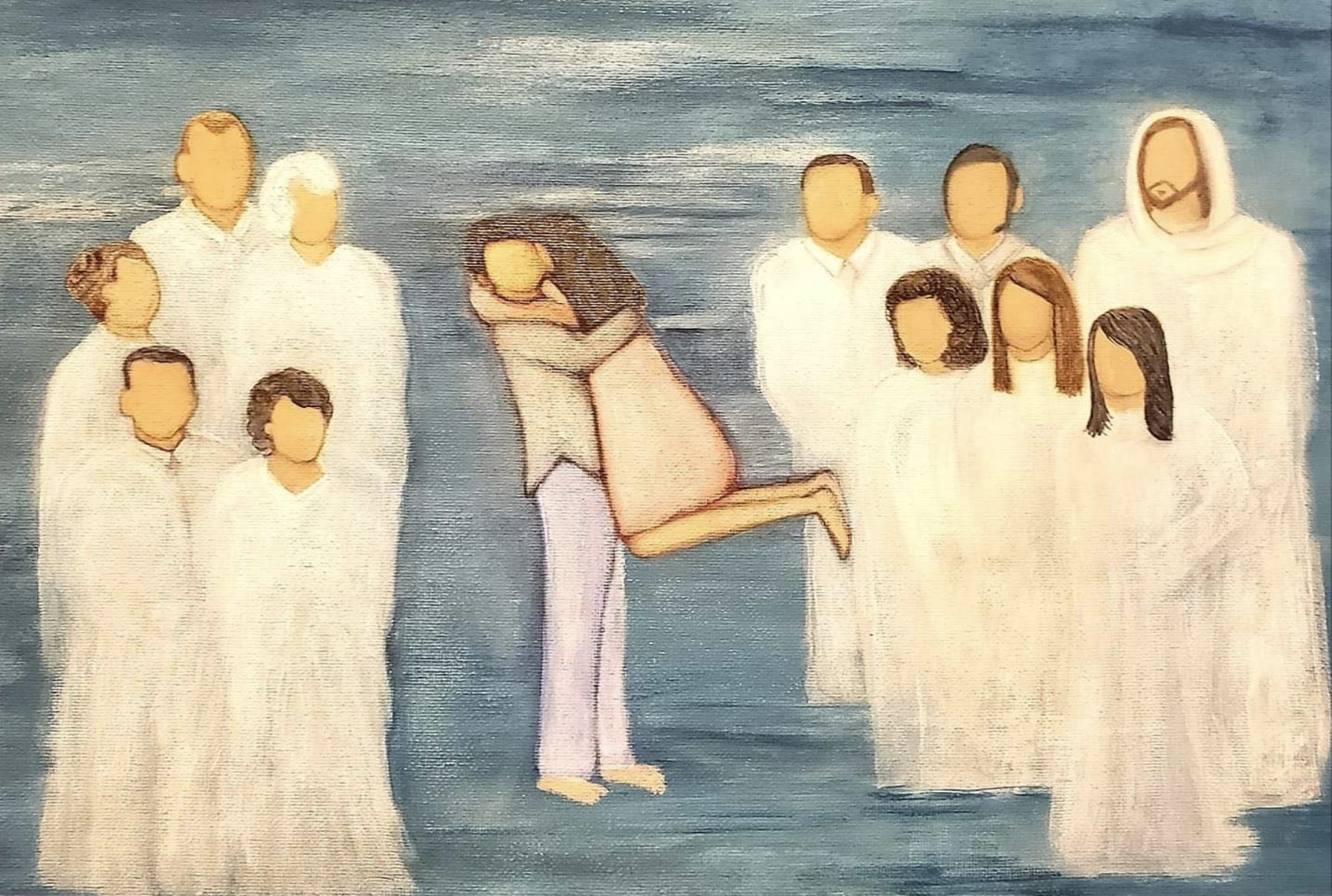 Because They Love Us: “Family Angels” that Intervene

We are all from the Divine Family of God.  His love and guidance flows to us and through us, but His WILL is often met by departed members in our immediate family line.  I recently wrote an article using experiences that readers like you have sent me. To read that article, CLICK HERE

I’d like to share five additional experiences where “family angels” have been allowed to bring specific blessings to their beloved family on earth.

Russell Root had a life changing experience twenty years ago in California when he was buoyed up by his grandmother’s spirit right after she died. He writes:

“I was 21 years old.  I grew up in the Church, but I was not living a very respectable life.  I decided to read the Book of Mormon to decide if I was going to stay in the Church.  Halfway through I knew it was true and I realized I needed to make some changes in my life.  It was about this same time on a Sunday in Utah that my Grandma had a stroke at church.  We received a call from family in Utah and heard the news that she was in the hospital doing fine, sitting up and talking to everyone.

“Later that night, I was in my room.  It was between 3am and 4am in the morning, (I’m a night owl).  Immediately, (not gradually) this thick energy I can’t describe filled my room.  I turned my head and without thinking, the word ‘Grandma’ came from my lips.  It was as if I could recognize and feel her individual spirit.   She had become a very powerful being.  At that moment I knew she had passed away and had come to visit me.  I went straight to the edge of my bed on my knees.  That’s all I could think to do.  I said a prayer to Heavenly Father to take care of my Grandma. I then jumped in bed and went to sleep.

“The next morning, I woke up and went upstairs to tell my parents what had happened the night before. My mom was on the phone with family from Utah learning that my grandma had passed away in the night.  But I already knew…

“That experience to this day gives me something to hold on to in the gospel.  Grandma has since shown up in people’s dreams and visions, both in needed wisdom and in hard times.  She is truly our family Angel still taking care of things from the other side.” [1]

Jeffrey R. Holland observed, “From the beginning down through the dispensations, God has used angels as His emissaries in conveying love and concern for His children.”[2]  And, who knows and loves us more than our direct family line?

Sometimes these “family angels” may come to rescue us from danger, as in the following experience.

Glenda Wardell’s grandfather, Tracy Smith, had died 12 years before she was born.  As she was preparing his name for temple work in 1986, she thought a lot about him, and wondered what he had been like.  Just prior to doing his work, she had the following hair-raising experience. She writes,

“One morning after rising and getting dressed I walked into the dining room and there stood a spiritual being between the dining room table and our china cabinet. I could not see him, but his presence was undeniable.  I wondered why he was there.  After a few minutes, I dismissed the thought and went about the morning.

“At this time, my young son Michael was in his room frolicking with a ball in his hands with two neighborhood friends.  His friends were on the floor directly beneath a ceiling light. Michael threw the ball up in the air accidently striking the light fixture.  I heard the noise and went running to the bedroom.  There lay the broken light fixture on the floor right between Michael’s friends.  It was broken in many pieces, and yet, it lay there in its perfect shape.  As I stood in the doorway it was clear to me that someone had caught the light fixture and placed it on the floor, completely missing the two boys’ heads.

I instantly knew why I had a visitor that morning. Unless there had been an intervention, there was no way that broken light fixture could have missed the boys heads. I became aware that the angel that caught the fixture was my grandfather Tracy.  A great tragedy was prevented by someone closely related to me and someone who well understood the things that can happen to boys as he had three of his own.” [3]

Being rescued by an angel doesn’t always look the same to everyone.  In the following story, “family angels” rescued a family member in a very unusual way.

Lora Kinder had a memorable interaction with her deceased grandma and aunt a few weeks ago.  She writes:

“My husband’s food service business was suddenly bankrupt in the pandemic shutdown, and we found ourselves in possession of the inventory. At least we could eat it and make our limited resources go farther, but I found myself wondering how to cook a huge beef roast. It was much larger than anything I would have purchased for our family. In addition, I have not been given the gift of cooking, and I hadn’t cooked roast beef at all in my 44 years of marriage. If I ruined it, that would be a big loss!

“I thought about how we are encouraged to call upon angels and ASK for assistance, [4] and I also remembered that my deceased grandmother often made roast beef for family, and my deceased Aunt Carol was a professional cook. I said out loud, ‘Grandma and Aunt Carol, I need your help with this. How do I cook this roast beef?’

Lora looked up how to cook a roast online and began to follow instruction, but as she did that she felt impressions coming from her grandma and aunt ‘hearing’ their voices in her mind.  They communicated to her things that weren’t according to the recipe guidelines, like ‘put in the meat thermometer; better check on it; Okay, time to pull it out, etc. They were cooks that cooked by ‘feel’ when they were alive, and they shared their little secrets about roast making with her.  Lora felt a peaceful confident feeling as she was cooking, and thought it was quite remarkable since it’s not what she generally feels when she cooks.  She continues:

“The roast turned out perfectly, and it was big enough for me to cut up and freeze for future meals. I’m convinced that Grandma and Aunt Carol were with me.”

“Family angels” are allowed at times to rescue, aid and comfort us in our challenges, because they are aware of what we are going through.  Elder Holland also wrote that “When we weep,  [God] and the angels of heaven weep with us.” [5]

Our problems become their problems and as in life, they want to wipe our tears…

Janet Johnson felt her grandmother, (who had died two years earlier) succoring her in a powerful experience. She writes,

“When I was attending BYU, just four years after being baptized, something traumatic must have occurred, (I honestly can’t remember what had happened), but I was kneeling at my bedside, sobbing. I didn’t call home because I knew my mom would worry about me, and I felt terribly alone. So, I knelt in prayer to tell Heavenly Father all about it. Then, I felt the bed indent as someone sat down beside me. At the same moment, I smelled my beloved grandmother’s perfume.

“I was so shocked, and because I was in the middle of prayer, I asked Heavenly Father, ‘Can I open my eyes and see her?’ I distinctly felt His answer. ‘Do you need to?’ I chose not to, but I felt her on the bed beside me until I finished my prayer, and had calmed down, and then I felt her leave…

“I cry every time I contemplate that few minutes, because it so clearly taught me how much Heavenly Father loves me, sending me the one person who could give me the kind of comfort I needed right then.”[6]

The truth is, WE ARE LOVED!  Even when we don’t sense it in this earthly realm, we at times get to feel it from ministering angels as in this final account.

Jeff Jacobs writes of a severe trial he went through where God allowed several “family angels” to strengthen and succor him at once.  He says,

“Several years ago, my youngest son was in serious trouble with the law involving arson and he was looking at a possible sentence of several years in prison. I agonized over this, as I was walking my usual three-mile route around the neighborhood lake one afternoon.

“As I walked and thought, I suddenly became aware of my recently deceased father on one side of me; his long deceased father on the other side of me, and next to him my maternal grandfather, and others unknown-all walking the walk with me, showing me their love and concern.”[7]

“What the restored gospel brings to the discussion on… family is so large and so relevant that it cannot be overstated: we make the subject eternal! We take the commitment…to a greater level because of our belief and understanding that families go back to before this earth was and that they can go forward into eternity.” [8]

Because of what Elder Perry taught, we can extrapolate that we either chose or were placed in specific groups in the premortal world, and for eons we have learned to cherish each other.  We were born into these same family lines in this life to learn to treasure them all over again here.  Death doesn’t stop the affection.  After this life, they want to continue to help us whenever they are allowed.

So, the good news is, “family angels” are often authorized to intervene on our behalf.  Why? Because they love us!

[4] Jeffrey R. Holland, “Pray without ceasing.  Ask for angels to help you.” From “Place No More for the Enemy of My Soul,” April Conference 2010.

Kneeling in prayer, having faith in the Lord that he is there. I know he hears each of our prayers. I know we have comforting, and healing angels by our side. Each one of us. Please do not give up on the Lord! He hears you! I had a special experience when kneeling in prayer. I testify the Lord loves each and everyone of us! Angels and our Saviour are closer than you may realize.

Important to remember that the Father, the Son, the Holy Ghost and Angel's are all on the same team.