A Man of Faith and Action

Happy New Year! Ring out wild bells and ring in healthy living for the right reasons – to appropriately honor, respect and provide effective stewardship for the earthly bodies that we yearned for in the pre-existence.

Throughout this month I’ll be sharing weight loss success stories from people I admire. They have found a bigger way to become smaller with Christ-centered principles, and so can you. There’s no guilt and no sadness here, because it’s a new year to embrace today and the future!

Today’s story features my own dear stake president, Erick R. Erickson of the Annandale , Virginia Stake. Next week we’ll hear about Helen Luksan, a seminary teacher who is down 48 pounds since last April, when this column first started and we launched MyWeightLossTeam.com (where Helen and many of the readers here are finding the support and friendship they need to succeed.) Click HERE for special information and offers just for Meridian readers.

Today’s Quote: Faith is the first principle in revealed religion and the foundation of all righteousness. It is the principle of action in all intelligent beings” (Joseph Smith, comp, Lectures on Faith ”

In the summer months of 2006, 59-year old Erick Erickson of Burke, Virginia, and stake president of the Annandale Virginia Stake, became concerned about numbness in his feet. After several appointments and tests by a neurologist, the numbness in his feet was nothing compared to the numbness and fear that filled his mind when the doctor firmly announced on a crisp October day, “You have diabetes. See a dietician and see what you can do on your own with diet and exercise, then come back in four months for another evaluation.”

He left the office that autumn day over a year ago in a blur of fear and shock, remembering the many previous annual appointments where the doctor had encouraged him to lose a few pounds as year by year his weight increased and he’d needed bigger belts and pants. The former BYU folk dancer who had never needed to lose a pound as a teen and young adult was genuinely shaken and his sense of humor, always readily at hand, was nowhere in sight that memorable afternoon.

Diabetes? Him? There was no family history of this! Had he not been eating healthfully? Had he not grown up in a home where his mother not only consistently provided fruits, vegetables and a balanced diet, but also taught her children the importance of unrefined foods? Didn’t Joyce, his beautiful wife and mother of their seven children, prepare evening meals of vegetables and lean meats? Did he not have a treadmill in the basement that he used every now and then?

Would he have to turn his back on a love affair with donuts that had started as a teenager when he delivered them door to door for a local business? After all, he was a busy stake president and professional businessman with a daily commute to Washington , D.C. from the Virginia suburbs. How could he be expected to find the time to make changes in his lifestyle? And would they make a difference?

A quick stop at the library for information pointedly brought to his attention the other truths that he had ignored for years: the meals, though well balanced, were too big. The frequent extra treats, desserts, indulgences, after-work and midnight snacks had resulted in 40 extra pounds, mostly belly fat that could potentially cause heart problems as well. In truth, the basement treadmill, though convenient, was often forgotten in favor of a few more minutes of sleep in the morning. There was no way to deny that he was unprepared for this day of reckoning, thinking there was “more time at a later time in my life.”

“Though I hate to admit it, fear,” he says, “was my great motivator – and not one I recommend to anyone! I was more scared than I’d ever been in my life! All of a sudden I realized that what I was eating was causing unnecessary, life-threatening health problems for myself and my family. What if what I was eating at that moment was slowly poisoning me or causing future blindness, or some of the other diabetic ailments? Quite honestly, even with a rich, full life centered around the gospel and family, I had to admit that I often lived to eat and loved to eat!”

“I didn’t know where to begin, since I thought I was eating fairly healthfully. The good news was that I’d been given some time to hopefully turn things around by myself and I vowed to do whatever I could.”

In one appointment a certified dietician presented him with the diabetic exchange program. (Simply google in Diabetic Exchange Program for many links to this powerful eating plan that is excellent for non-diabetics as well.). Together they determined how many calories he’d need to lose weight, and translated tham into the program’s “exchanges” of fruits, vegetables, breads, milk, meats dairy products and fats for a balanced diet.

“Even so, it was overwhelming! I took a day off work to study it all out. I tried to set up spreadsheets on the computer, then covered the dining room table with pamphlets and forms. I was flooded with information and food choices! As I looked through the food listings, however, it occurred to me that I knew what I liked for breakfast: cereal or pancakes, eggs, toast, and fruit. Lunch was even easier since from the time I was a missionary in Finland 30 years ago ( the Lord’s true mission !) – I’ve eaten cucumbers and tomatoes, Finnish crackers and a bit of cheese. Joyce fixes 10-15 regular dinner menus with chicken, lean beef, salads, and so on.

“It was a relief to discover all these favorite foods within the food lists! In fact, there’s probably no food that’s not listed there. I just needed to sort them out to determine correct portions and how many of each I could have each day. I realized that I’d been making it much more difficult for myself than necessary for years by ignoring the obvious and acquiring some easy to find facts.” 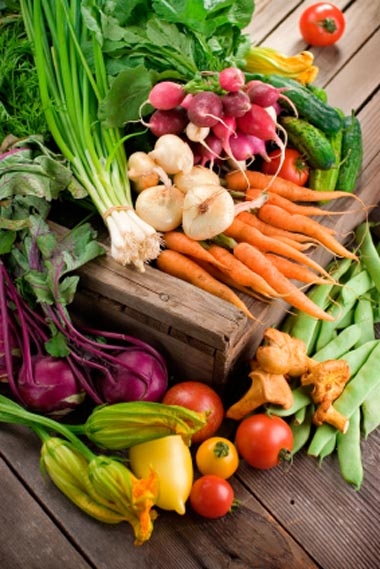 If you don’t think of vegetables as diet food, you are more likely to enjoy eating them. iStockphoto.com/Kelly Cline

Nevertheless, it was a shock to realize that his three allotted exchanges of milk converted into only 1 cups of milk. “I’d been drinking several times that amount ever day – probably at least 700-800 calories in milk. Even though it was skim milk, no wonder I was in trouble! And that was just one of the exchange categories,” he remembers. “I started writing down what I ate and the exchange values in my day-planner I keep in my shirt pocket. I quickly discovered that there were no exchanges for candy bars in the afternoon, but there was also no need to go hungry. I was so used to having food in my mouth much of the time that although I’d never been a gum-chewer, I started chewing sugarless gum to make the transition to eating less. I replaced all that milk with water. It was easy to exchange white flour and white rice for whole wheat and brown. Now those things taste much better than the white stuff.

“I weighed myself every day and committed to my basement gym each morning, even if it was for only 15-20 minutes, then made up for the additional time with walking during the day and bike rides with my son on the weekends.

“I was surprised at how easy it was and how my spirits began to lift! By the end of the first month, I’d lost 10 pounds. I repeated that in November, again in December and by the end of January, 2007, I’d lost 40 pounds! I returned to the doctor and to our great relief, the diabetic tests came back within a normal range.”

Now there were decisions to make. Would he give away clothing that was too big, or keep it “just in case?” His answer: “I got rid of it all! There’s no going back on the years and power I’ve added to my life. Now I know what to do and do it! A year later, I still eat conscientiously and weigh myself every day”

It’s a fascinating thing, we agreed. Even though we are surrounded with with ample education and evidence for healthy living, somehow it’s easy to ignore and to put aside for later .

His great love for the members of the Annandale Stake surfaced as he reviewed the past year of maintaining his weight loss and recognized the necessity of diligence and vigilance, and exercise.

“You know,” he said, “I just have to ask myself and ask the members of the stake to ask themselves, Am I becoming the best person I’m supposed to be? Am I fulfilling the measure of my creation?’ How to more purposefully follow the Savior and please the Lord is no more a mystery than how to determine how to cut calories and live more healthfully. It’s just a matter of doing what is required and not ignoring the truths that are readily at hand.”

With joy and personal understanding, a conversation about losing weight for physical health and well-being turns into an intriguing discussion on the principles of natural laws, faith and personal salvation as described by Joseph Smith in the lectures on Faith: “To live by faith is not to sit around and wait for things to happen, but to take action! Joseph Smith shared in the Lectures on Faith that that faith is the capacity to act on what you know!”

President Erickson’s faith and actions have reaped him health and fitness that provide personal energy for him and a great example to launch out our own new year of fitness and joy through faith and action.

Today’s Empowerment : “2008 is my year to lose the weight and feel great about my life and my body. I have the faith to act upon that which I know to be healthy and right for my body.”

This is such a welcome relief — and a traditional good luck dish for good things to come in the New Year!  Pureeing the one can of black beans gives it the texture of a creamed soup without the calories/fat.
Make it a New Year’s habit to always drain and rinse canned beans/veggies under running water to remove extra sodium.