The Princess and the Frog-A Mixed Bag | Meridian Magazine

The Princess and the Frog-A Mixed Bag

After TIME magazine called The Princess and the Frog “the best film of 2009” and my folks sang its praises, perhaps it was only natural that the bar would be set too high. Then again, it’s possible that I have been spoiled for so long by the brilliant originality displayed year after year by Pixar that a princess tale by Disney Animation Studios which adheres strictly to formula was bound to disappoint, even slightly. I suppose I should be pleased that Frog was as enjoyable as it was; I was glad to have seen it, and children likely will be more so. Then again, with some potentially nightmare-inducing scenes, maybe not. 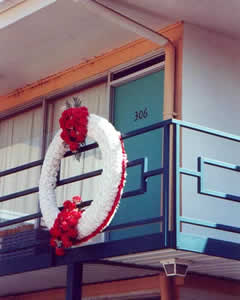 I’ll return to that in a moment. For now, as they say, back to formula. Princess character to inspire a whole new wave of Halloween costumes, PJ’s, coloring books, and must-have dolls? Check. Anthropomorphized animals that sing, dance, provide comic relief, and play to broad cultural stereotypes? Check. Musical numbers to spice things up? Check. Power-hungry villain whose nefarious plot happens to involve breaking up the princess’ romance? Check. Message about being true to yourself and chasing your dreams? Check. Happily ever after ending? Checkmate. 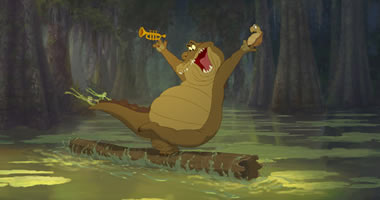 Then again, enough ingredients have been changed to keep it fun. As has been highly publicized, the princess character this time is African-American, and the diversity is very welcome. Though it’s true that America has no royalty, the title makes sense by the finale. The combination of a black lead with a New Orleans setting allows for the standard musical numbers to be boosted by Gospel and jazz styles that are truly catchy and stand uniquely apart from Disney’s admittedly excellent, but generally uniform, musical canon. 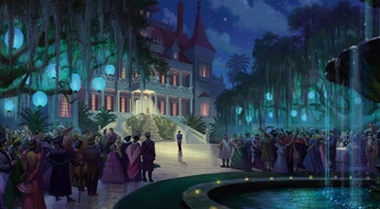 The traditional animation, especially the attention to detail in recreating New Orleans, is stunning, providing some hope for the future of hand-drawn animation in today’s computer-generated market. The peripheral characters, including a trumpet-playing bayou alligator, a Cajun firefly, and redneck hunters, are amusing. However, Disney is lucky that, in my experience, people from the South tend to have a better sense of humor than the rest of us about being portrayed through the lens of cultural stereotypes, otherwise they’d have a real uproar on their hands (read: cultural, not racial, which is obviously a very hot-button topic). 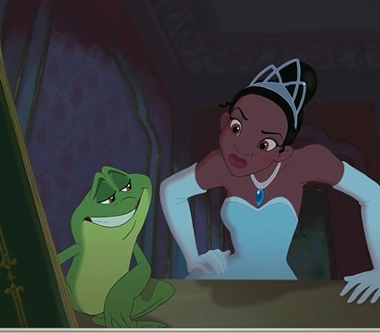 The broad characterization of the prince, however, was less charming to me than it seems meant to be. Sounding like a poor man’s Antonio Banderas, the writers seem to overestimate his entertainment value. I’m sure many will find him hilarious, and I thought he was likable enough, but from time to time I found him mildly annoying, as if the filmmakers were trying to capitalize on the popularity of the much funnier Puss-in-Boots from the Shrek films. 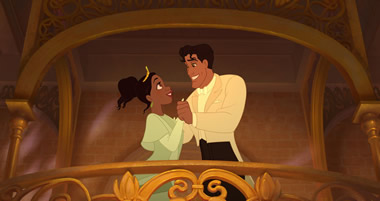 On the plus side, it helps that the message about chasing your dreams and being true to yourself is bolstered this time by very clear moral instruction about working hard instead of merely wishing upon a star. This, coupled with the culturally diverse cast of characters, can be appreciated by children and adults alike. 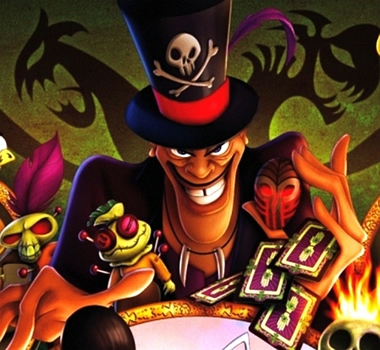 Of concern to parents should be the portrayal of voodoo magic by the villain, specifically with regards to the creepy animation of his “friends on the other side,” evil spirits who do his bidding after he makes a pact with them. Drawn as shadows, they are nevertheless quite scary. As an adult viewer, I wasn’t especially troubled by it: the voodoo magic is shown as evil and the villain pays the price for meddling with it. But as someone who had very young children with him, I was concerned about nightmares and found myself thinking that the film should have been PG instead of G.

Fans of classic Disney princess tales should find much to enjoy here, and others likely won’t regret seeing it. But with apologies to TIME magazine, The Princess and the Frog is not the year’s best film. That title belongs to Pixar’s Up.