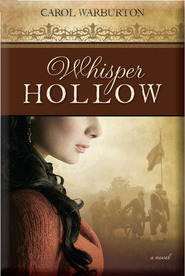 Whisper Hollow by Carol Warburton is a small gem I almost missed and which came to me several months after its release. The story takes place at the close of the American Civil War in the remote mountains of Tennessee and features a young woman who has to depend on her own inner strength, her faith in God, two good dogs, and the skills her parents taught her to survive.

Talitha (Tally) Spencer leaves behind a blissful childhood where she has grown up secure in the love of her parents and good, dependable friends when the war drains the mountain people’s men and food supplies. From a childhood filled with mountain breezes, orchids hidden in the woods, music, and a close association with plants and animals, where she is accustomed to running wild and free, she faces the tragic destruction of her family when her pa is murdered and her mother is attacked and left mentally shattered. Now the burden of caring for the farm, protecting her mother, and driving off predators falls to Tally. The incredible burden drives her to consider the marriage proposal of Ollie, a childhood friend who has returned from the war bitter and filled with a drive to get revenge against the Yankees, yet her heart is filled with doubts.

Ollie isn’t the only childhood friend to make his way back to Whisper Hollow. Unlike Confederate Ollie, Cole fought for the Yankees. Troubled by serious decisions he must make, he seeks the peace and solitude of the mountains. The soaring sound of his lonely violin seems to speak to Tally’s heart and draws her to him.

Tennessee, like many of the states involved in the war, is split between Yankee and Rebel sympathizers. The formal end of the war doesn’t magically erase bias and hatred. Added to this animosity is the reality of soldiers who have become brutalized to the point they have become thieves and murders who commit atrocities against the war ravaged civilian population. Tally struggles against all of these factors.

Warburton deals with these mountain people with tenderness and respect, never resorting to hillbilly clichs. She captures their pride and independence in a touching way. For those of us who grew up with a bit of mountain country in our own backgrounds, the descriptions and mannerisms touch a tender spot.

The major characters are well-developed and real with believable strengths and flaws. Some of those traits provide added layers to the various personalities. It takes a couple of pages before a strong hook is applied to the first chapter, then the story explodes into action. The plot slows down in the middle, but not enough to bore the reader. The last few chapters will leave the reader gripping the book with white knuckles.

I liked the mountain setting and I find something poignant in the way Tally thinks, her emotional reactions, her strength, and the way she faces a combination of emotional and physical challenges.

Carol Warburton has written five other books, derived from her love of history, and all are set in various geographical and historical places. Some have reference to LDS Church history, but this one does not. She and her husband live in West Jordan, Utah, where they both serve in the Oquirrh Mountain temple.