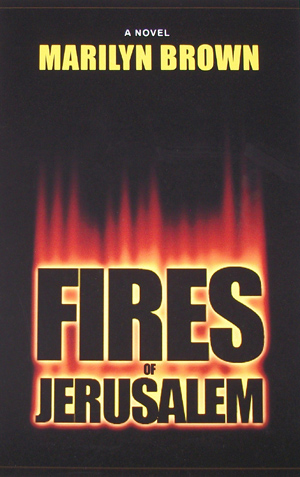 Not too many people know much about Jeremiah the Prophet beyond references to his preaching on the streets of Jerusalem shortly before the Assyrians destroyed that city and took its inhabitants captive and that he was a contemporary of Lehi. Several LDS authors mention him in their books featuring Lehi, but it’s not often that he is featured as the principal character in a novel. Marilyn Brown’s new novel Fires of Jerusalem reveals a wealth of information concerning this Old Testament prophet and places him as the central figure of this turbulent time period.

The story begins with fourteen-year-old Jeremiah and his friend Baruch plunging into the grimiest, most crime-ridden section of Jerusalem in search of Baruch’s stolen pet goat. Though they manage to recover the pet, they inadvertently witness the rape and torture murder of a young girl by two palace guards. Jeremiah’s father, Hilkiah, concerned that the boys may have been seen, moves his family to a farm a few miles outside of the city where both are trained as scribes.

Hilkiah has made an exciting discovery of ancient records and feels a compulsion to translate them and show them to the king. He hopes that if the king reads the records he’ll curb the evil that has replaced the laws of Judea. The king dies before the record is presented to him and his weak son succeeds him. What follows are generations of corruption, the infusion of idolatry into sacred places, the cessation of adherence to God’s laws, political intrigue, and moral depravity.

During this time Jeremiah marries, becomes a father, and continues his close association with Baruch, who becomes his scribe. He experiences both joy and devastating personal losses. His faith is tried and he receives a mandate from God to warn his people of their future bondage and the destruction of their city. For his efforts he is imprisoned, beaten, and scoffed at, still he continues to deliver God’s messages to the people over a period of six decades.

Brown is more explicit in describing the evil the people have fallen into than most LDS writers describing this time period. Their sins go far beyond taking a few too many steps on the Sabbath to being almost unthinkable in their baseness and denial of God. The cruelty toward Jeremiah and to others unfortunate enough to cross the paths of power-mad individuals from soldiers to royalty are more graphic than some readers may find comfortable. The novel is equally strong in delivering a message of obedience, faith, and commitment to God.

Though the author leans toward more tell than show, she has a compelling style that keeps the reader turning pages and being drawn into the story. Her weakest point in my opinion is her abrupt scene changes and awkward segues from one scene or chapter to another. This often left me wondering if I’d missed a page and turning back to check. Her research is impressive and she has done an excellent job of making it easy for a reader to separate fictional elements from factual and the fictional elements and people are presented in a plausible manner. The large number of similar names can be confusing, but in writing historical fiction concerning real people, the author doesn’t have much choice in names. There are places I would have liked more story or greater character detail, but the story does follow closely known details of the real characters and their era. I found the story fascinating and it left me with a greater appreciation for a prophet I had previously viewed as secondary to Lehi and Mulek.

Marilyn Brown is well known in LDS literary circles. She has won several literary awards and established the Marilyn Brown Novel Award out of Utah Valley University. She has authored an impressive list of novels, poetry, and nonfiction works. She and her husband live in Utah and are the parents of six children.

FIRES OF JERUSALEM by Marilyn Brown, published by Parables, softcover, 229 pages, available on Amazon in both print ($14.95) and e-book formats (3.99).