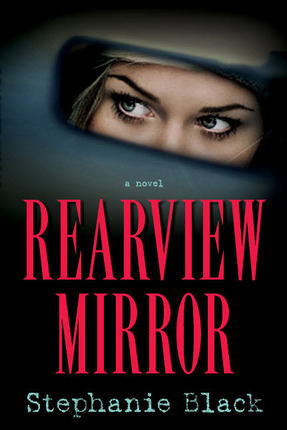 Stephanie Black’s new novel Rearview Mirror is so full of psychological and emotional problems it may leave the reader wondering if any of the characters, the author, or the reader are completely sane. It begins with a murder and it’s hard to feel a great deal of sympathy for the victim.

The murder scene is quickly followed by the arrival of a package at the office door of a young college professor, Fiona Claridge, who after eight years is still struggling to put back together her life after a car accident that left her injured and her passenger and roommate, Mia Hardy, dead. James, who was Mia’s boyfriend at the time of the accident and is now a professor at the same college where Fiona teaches, is with her when the package arrives and urges her to turn over to the police the insinuating note and car keys found in the package.

At the funeral of the murdered woman, whose death is assumed to be an accident, events shatter into a frenzy of problems.  Fiona’s former boyfriend, the dead woman’s son, Allen, is pleased to see her and she can see he is facing severe emotional stress over the loss of his mother and that he still has strong feelings for Fiona.  Allen’s brother, Gavin, is rude and demands she leave.  Allen’s wife, Summer, is the most insulting, accusing Fiona of carrying on an affair with her husband.  It becomes clear there are serious problems between Mia’s sister, Carissa, and her husband, a police officer, who is investigating the disappearance of a doctor who had once been his wife’s friend and who had been planning to set up practice in their town.

Mysterious packages and threats continue to plague Fiona and when they begin to escalate to something more, James further undermines her tenuous security by making it clear his feelings go beyond the casual friendship they have shared since their college days. He demands to be allowed to protect her and worries over her fragile emotional state.  She doesn’t want to hurt anyone or turn her back on any of the people who seem to need her help, leaving James frustrated that with the threats and incidents becoming life threatening, she is too trusting and yet afraid to depend on anyone but herself.

Black’s feminine protagonists generally are somewhat emotionally insecure, though likable.  Fiona Claridge fits this mold more than most.  She is deeply scarred by the guilt she feels over the accident that occurred when she was driving too fast on a rain slick road.  She suffered severe physical injuries that left her scarred inside and out.  The reader sees only marginal growth in her until the very end when she finally sees her need for help in dealing with her emotional problems.  Another major character in the story, Mia’s sister, Carissa, is almost as emotionally insecure and guilt-ridden as Fiona over mistakes she has made in her life. We also see three strong female characters in this story; two manipulative, fact twisting, egocentric women who will go to any length to get their way, and Summer Taylor, the wife Allen is about to divorce who pulls no punches and goes after what she wants, stands up to obstacles, and has the strength of character to admit when she is wrong.  The male characters are not as well-developed as the females and in some cases are manipulated by the women in their lives. Necessary tidbits of their past is revealed slowly as the story develops.

The suspense escalates slowly in Rearview Mirror with careful plotting and seemingly unimportant events until suddenly in the last third of the book the suspense is so riveting that even if the reader has guessed the identity of the murderer there are doubts and nearly every character in the book has wisps of suspicion like trailing clouds around him or her. Black makes full use of weather, light, sound, and all the elements that surround everyday life to create mood and an ambience of suspense.

Stephanie Black is a three time winner of the Whitney Academy Mystery/Suspense Award and has developed a strong following of loyal fans who enjoy her intriguing mystery/suspense novels. Some of her firmest fans are her husband, Brian, and their five children.  She was born in Utah and has lived in various places, including Arizona, Massachusetts, New York, and Ireland. Anyone who enjoys mystery/suspense novels will find Rearview Mirror a more than satisfying read.