The Religious Experience of Mormonism 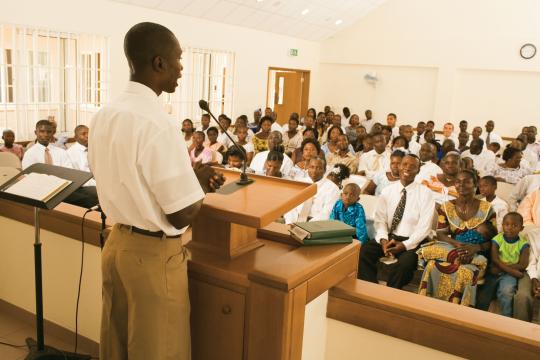 The following commentary was originally published in 2008:

The religious experience of members of The Church of Jesus Christ of Latter-day Saints is based on a spiritual witness from God that inspires both heart and mind, creating an interpersonal relationship directly with the divine. It does not require one to pass a rigorous theological test. Nor does it demand the extreme self-denial and seclusion of asceticism. Rather, this unique individual experience unfolds in the natural course of everyday living. Thus, the beliefs of Latter-day Saints are not rooted in concepts and principles, detached from the realities of life. They are grounded in a much deeper level of experience that motivates individuals to action.

Furthermore, religious experience is too varied and indefinable for systematic theology to fully account for. At the same time, it is not simply relative to the passing whims of each individual believer. For Latter-day Saints, it must be founded on revealed truth. Emphasizing the important role that doctrine plays in guiding religious experience, President Boyd K. Packer of the Quorum of the Twelve Apostles encouraged Latter-day Saints to internalize that truth: “True doctrine, understood, changes attitudes and behavior.”

Thus, the religious experience of Latter-day Saints is both sufficiently anchored in rationality to satisfy the mind and sufficiently independent from intellectual systems to satisfy the spirit. President Packer described this relationship as “a harmonious combining of both the intellect and the spirit.” In a society that limits so much of human experience to the known boundaries of scientific knowledge, religious experience is often dismissed. If all religious experience was bound by a system, there would be little room for mankind’s boundless potential for spiritual growth. God expects His children to continually stretch their horizons and broaden their understanding of things both secular and religious.

Regarding the nature of Mormon worship, historian Richard Bushman emphasized at the Pew Forum on Religion & Public Life that “there are grounds for believing in the existence of God simply because the spiritual life confirms it.” Thus, Bushman continues, “people believe there is a God because it’s manifest to them spiritually.” Accordingly, Latter-day Saints place more emphasis on experience and belief in their relationship with God than on philosophical, rational claims about God.

Mormon scripture and revelations lay the groundwork for a theology that tends to encourage action over contemplation. Joseph Smith declared that there is no fundamental division between the temporal and the spiritual (Doctrine and Covenants 29:34). In his recent book People of Paradox, Mormon scholar Terryl Givens maintained that “Mormonism is ill disposed to maintain a simple hierarchy that privileges spiritual activity over physical or the contemplative over the active.”

Though the spiritual and the practical are often viewed as opposites, in Mormon worship they complement each other. All spiritual inspiration naturally leads to serving humanity. In this way spirituality bears itself out primarily in action and experience. Though good works in themselves don’t merit salvation, they do demonstrate the validity and authenticity of one’s religious beliefs and convictions.

In his first letter to the Corinthians, the Apostle Paul declared that of all the Christian virtues, charity is the greatest. Though charity manifests itself in many ways, its highest expression is service to those in need. This love is superior to any intellectual achievement. But love alone, without action, is not enough. Joseph Smith elaborated on this principle: “A man filled with the love of God is not content with blessing his family alone, but ranges through the whole world, anxious to bless the whole human race” (History of the Church 4:227). Latter-day Saints find great fulfillment in attending church on Sunday. But the real work of religion — serving others — requires no special time or place. It is action, not just spiritual devotion, that ultimately determines one’s level of religious commitment.

Knowledge results from beliefs that are acted upon. Accordingly, Latter-day Saints test their beliefs in the crucible of experience. And experience confirms the truthfulness of those beliefs. Elder David A. Bednar of the Quorum of the Twelve Apostles described the interaction between faith and knowledge: “Assurance, action, and evidence influence each other in an ongoing process. This helix is like a coil, and as it spirals upward it expands and widens. These three elements of faith — assurance, action, and evidence — are not separate and discrete; rather, they are interrelated and continuous and cycle upward. … As we again turn and face forward toward an uncertain future, assurance leads to action and produces evidence, which further increases assurance.” Thus, knowing informs and motivates becoming, and becoming requires doing.