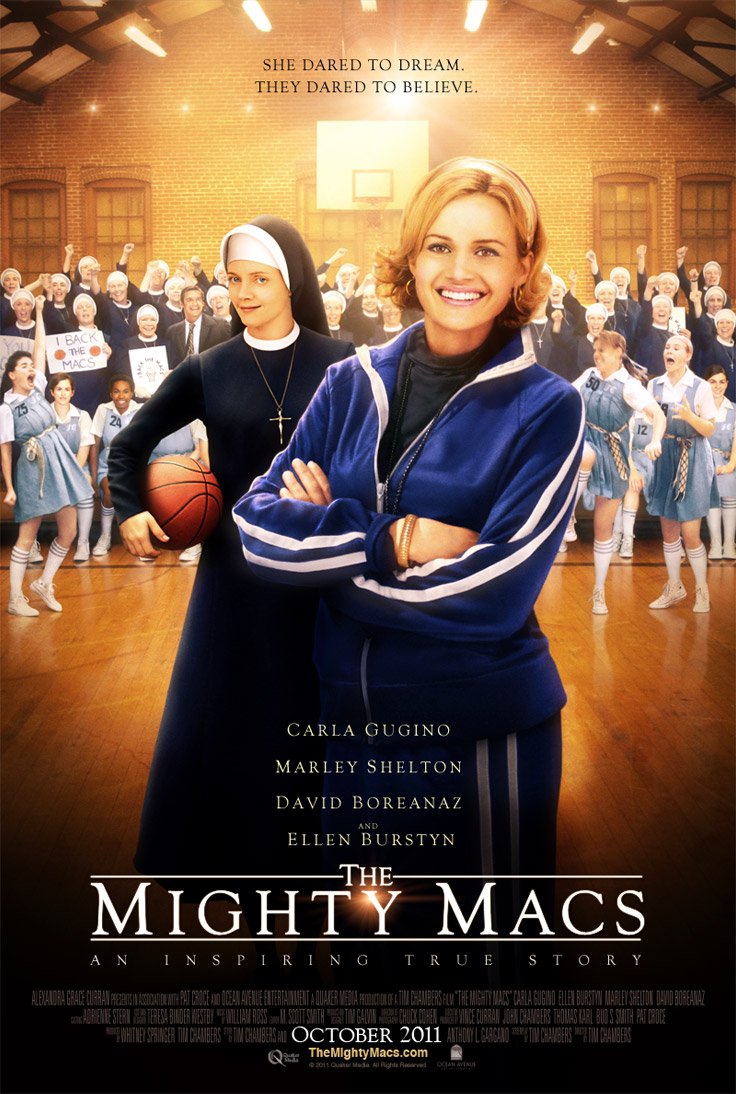 Bogged down by an abundance of sports-movie cliches, occasionally flat dialogue, and uneven direction, the women’s basketball drama The Mighty Macs nevertheless succeeds as family entertainment thanks to its sincerity and strong acting by its lead players.

Telling the true story of a down-on-its luck Catholic women’s college in the 1970’s, the film is anchored by the performance of Carla Gugino (Spy Kids, Night at the Museum), who strikes a nice balance between an independent spirit and a warm disposition as a female coach trying to earn respect for her team and her gender in a sport long considered the domain of men.

David Boreanaz (Bones, Angel, Buffy the Vampire Slayer), as her husband, initially threatens to be a one-dimensional character, but experiences a nice bit of growth that drives home a welcome message about how to make marriage work. Hollywood veteran Ellen Burstyn finds a few nice layers to her “stern nun” character, while relative unknown Marley Shelton gives the most interesting and likable performance of the film as a nun/assistant coach who is searching for her calling in life. All other characters are underdeveloped, a bruising error in a film like this, where audience connection with the teammates is vital for emotional engagement (see Remember the Titans).

First time director Tim Chambers (who also penned the screenplay) shows his inexperience, but also displays potential as an emerging talent. Some scenes fall flat and seem to be merely placeholders, while others pack a surprising punch. Unfortunately, the film telegraphs its story from the opening frame, and within the first ten minutes one can predict almost every step of the tale. The final basketball game carries no dramatic tension as it rushes hastily towards its inevitable conclusion. Here, as happens far too often elsewhere in the film (including in its dialogue), The Mighty Macs feels like a sloppily copied version of a better film’s playbook. However, there are nice moments of unexpected humor and a refreshing message of interfaith appreciation. The cinematography is lovely and vibrant, and the attention to period detail is sound. What sets the film apart is its positive depiction of religious faith, female-driven plot, and an interesting glimpse into the world of Catholic education (which, it seems, is often distorted in pop culture).

For these reasons, as well as the performances of the principle cast, The Mighty Macs is recommended for fans of inspirational sports movies and religious cinema, though it’s far from the best of either genre.

CONTENT OVERVIEW: Mighty Macs is rated G. It has no foul language, violence, or sexual content. A nun is shown having a beer and it is acknowledged that a group of nuns used to gamble.

MESSAGES TO DISCUSS: The Lord requires unity if we are to serve Him effectively (D&C 38:42). Husbands, love your wives, and give of yourselves for them (Ephesians 5: 25). We are in the service of God when we are in the service of others (Mosiah 2:17). Our Savior Jesus Christ is a being of joy; happiness is our course if we follow him (3 Nephi 17:20).