Autumn time is full of color, costumes and books. Here are some great books on the subject.

That Pup!, by Lindsay Barrett George, is a simple picture book painted with full color gouache that has a small pup locating, and then counting, acorns behind a wheelbarrow full of leaves, in a pumpkin patch and so on. This book would be a good beginning reader and is good for ages four to six. 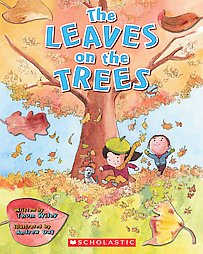 The next six picture books are good for ages four to nine. The Leaves on the Trees, by Thom Wiley, and illustrated by Andrew Day, is a paperback picture book that can be read or sung to the tune of “The Wheels on the Bus”.  But what I like best about this inexpensive book is the easy way it shows of how to identify the type of a tree by the distinctive shape of the leaves.

What if Everything had Legs?, by Scott Menchin, is a clever picture book that explores the many unique possibilities when a young girl is walking home with her mother. As she tires, she wishes her house had legs and could walk to them. And so begins the game of imagining the possibilities of many items with legs such as leaves, cars, rocks and more.  The ending opens up a new discussion when the girl asks her mom, “What if everything has arms?” The mixed media pictures on a one-color scheme page makes the images pop out.

Apples and Pumpkins, by Anne Rockwell, and illustrated with bright watercolors by Lizzy Rockwell, is the perfect story about what happens in the fall.  A young girl and her parents head to an orchard where they pick the reddest apples. From there, they head to the pumpkin patch where they find the perfect pumpkin they carve for the holiday.  It ends with trick-or-treating.

Tucker’s Spooky Halloween, by Leslie McGuirk, has this little dog attempting to be scary this year since he wasn’t last year as a pumpkin. After many attempts to find the right costume, he finally finds the perfect scary costume. The pictures are done in a gouache.

And Then Comes Halloween, by Tom Brenner, and illustrated in watercolor and collage by Holly Meade, is the perfect picture book for ages four to nine that culminates the month of October.  Children are enjoying the last days of cool outside play before the blustery chilly days set in. Then as the days progress, they begin preparations for Halloween and making costumes and ending with the last day of the month by pouring their collected candy onto the floor to categorize and enjoy them. 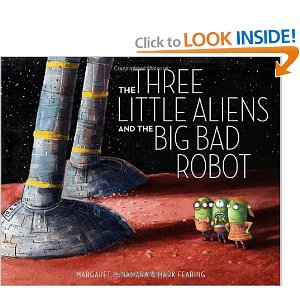 The Three Little Aliens and the Big Bad Robot, by Margaret McNamara, and illustrated with images drawn by hand and gendered digitally using collage techniques by Mark Fearing, is a space-age rendition of “The Three Little Pigs”. These three little aliens are sent on their way out in space to find their own home, but mama reminds them to beware of the “Big Bad Robot”.  Each alien locates a planet in our solar system but one builds a much safer home. The story is great fun to read-aloud and the inside pages have the solar system along with more facts found in the author’s notes.

The next two picture books are good for ages seven to twelve. Frankenstein Makes a Sandwich, by Adam Rex, is a hilarious collection of poems about a collection of monsters that will tickle your funny bone and make you think twice about your perception of each. Some of the poems include “The Lunchsack of Notre Dame”, “The Creature from the Black Lagoon Doesn’t Wait an Hour Before Swimming” and “Count Dracula Doesn’t Know He’s Been Walking Around All Night With Spinach in His Teeth”. The oil paintings are as hilarious as the poems! This book can be enjoyed by all ages. 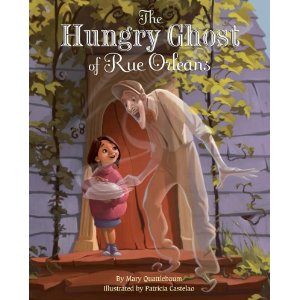 The Hungry Ghost of Rue Orleans, by Mary Quattlebaum, and beautifully painted with a flair of Louisiana by Patricia Castelao, is a ghostly story with a friendly twist. Fred, the ghost, is quite upset when a father and daughter show up to clean up his dusty old house and turn it into a restaurant. He is about to vacate the place when he is quite surprised that the owners want him to stay. This would be a fun read-aloud and don’t forget to check out the author’s note found at the back about her choice of foods served in this bayou city.

The last three books are non-fiction thrillers good for ages seven and up. Monster Hunt:  Exploring Mysterious Creatures, by Jim Arnosky, investigates six unknown creatures and explores the many possibilities. These include Big Foot, The Loch Ness Monster and the Giant Shark. By reading and seeing the somewhat frightening paintings by the author, this fascinating book may just spark the beginnings of a cryptozoologist. 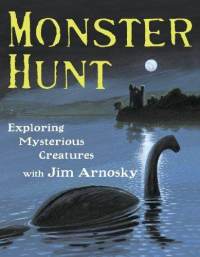 Here There Might Be Monsters: The Legendary Kraken and the Giant Squid, by H. P. Newquist, takes the mythical belief by early settlers and using scientific data, leads the readers to what is believed to be the giant squid.  Actual photos and maps found throughout make this a very interesting read.

In Search of Sasquatch, by Kelly Milner Halls, has the author compiling all of the information and blending the legends with what she calls facts. This book is a fascinating read and demonstrates how science has to be backed with facts, even though her facts are a bit of a stretch.  There are photos, drawings, charts and maps found throughout.