The Outer Edge of Heaven by Jaclyn M. Hawkes 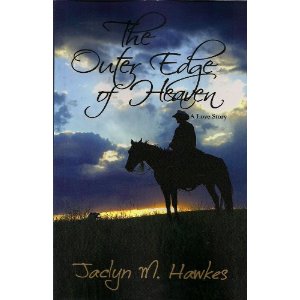 Jaclyn M. Hawkes has a new novel out called The Outer Edge of Heaven. It’s a contemporary Western romance and it’s clever and funny. It’s not all humor, however. There’s a touching love story along with several social issues, a lot of action, and a dreamy silhouette cowboy on a horse at sunset cover.

Charlie’s best friend since third grade is a guy.  He’s accustomed to running interference for her to give her a bit of breathing space from her high-powered parents and the fiancé they’ve picked for her.  “Fo,” short for Forest Eldridge, knows Charlie has no interest in Elroy, the divorce attorney her parents are convinced is perfect for her.  She also has no interest in law school, her parents’ choice for her career.  So he convinces her to go to Montana to work for his Uncle Richard for the summer.  Charlie agrees since she isn’t sure she can hold her own against her mother’s manipulation and demands if she returns to her home in Connecticut.

She arrives in Montana to discover a highly dysfunctional family, seriously needing help.  The uncle’s first wife died, leaving him with two small boys to raise.  His second wife decided ranch life and being a mom weren’t for her, so she packed her bags and left, leaving not only her stepsons, but her own son behind.  Eventually the uncle married again, this time to a jet-setting flight attendant who doesn’t know the meaning of fidelity.  She does add two little girls and another son to the mix.

The ranch is a large operation and is primarily managed by Luke, Richard’s second son.  The oldest son, Chase, spends all of his time body-building and chasing women, much to Charlie’s disgust when he targets her.  There are a large number of employees, and one cowboy in particular makes Charlie uncomfortable.  Luke makes Charlie a little uncomfortable too, but in an entirely different way.

Luke assigns Charlie to be a substitute mother to the three small children and the fourteen-year-old, since their mother is seldom around and doesn’t wish to be bothered by them when she is. Charlie loves the assignment since she wants to be a kindergarten teacher, then a full-time mom — not an attorney.

An attempted assault, a broken engagement, Fo falling in love, a flu epidemic, a series of break-ins, and Charlie’s attempts to stand up to her parents add to the excitement.

Usually I read novels that are polished and ready to go on bookstore shelves or they’re downloaded to my Kindle in their finished state, though occasionally I receive a bound copy that hasn’t gone through its final proofreading.  Such was the case with The Outer Edge of Heaven. The typos (which I trust have all been fixed by now) weren’t hard to skip over, but I hope Sister Hawkes will forgive me for mentioning one funny error — “she bought lobsters, and muscles, and shrimp packed in ice.”  It’s only funny because every writer I know, including me, has made such a mistake at some time, even though we know better, and groan with embarrassment when it somehow evades both the author’s and proofreader’s scrutiny.

This story moves at a lively pace.  The main characters are likable, and the dialog is often hilarious.  Luke is a little too-good-to-be-true in his willingness to make extreme sacrifices for others, but this really isn’t unrealistic.  Often when a family is dysfunctional, one child takes on the role of parent and becomes self-sacrificing in his/her attempts to bring normality to the family.

Charlie shows a lot of growth as she moves from acquiescing to her mother’s demands to becoming a strong individual in her own right. The younger children are portrayed well as realistic children.  The author does a credible job of showing the part faith plays in dealing with difficult situations, especially when the right thing to do seems to run contrary to church teachings.

Jaclyn Hawkes grew up in a large family in Utah.  After completing her education she had a career and traveled.  She is now married and a full-time mother and writer living in a mountain valley in Utah with her family and all their pets.