“It felt like a million pounds lifted off my shoulders,” was the reaction of an elated New Jersey widow after Mormon Helping Hands volunteers cleaned her flooded basement. In late August, between the damage of Hurricane Irene and rain, the Saddle River overflowed its banks. The water poured into the widow’s basement as well as other homes, destroying furniture, walls, carpet and possessions. In some cases even the main floor of homes was damaged. 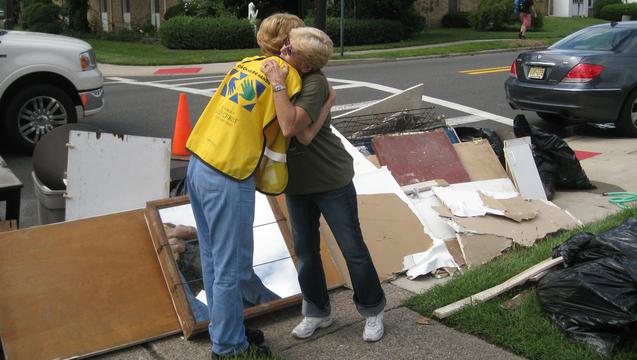 Charlene Paragios lost her husband a year ago and has been struggling. She was not in a position to help herself and was overwhelmed. When the volunteers stopped at her door to see if they could help, she was relieved.

Mormon Helping Hands volunteers are members of The Church of Jesus Christ of Latter-day Saints who are focused on bringing relief to those in need.

Within days after Hurricane Irene made its destructive exit from the east coast, Latter-day Saints cleaned homes and comforted people. So far, more than 2,000 volunteers have cleaned the homes of 600 families. And more volunteer help is expected throughout the month of September because so much still needs to be done.

Church leader Elder Jeffery E. Olson of the Seventy is chairman of the Church’s coordinating council overseeing the cleanup. He said Mormon Helping Hands volunteers have cared as much for the people as for the work they are doing. “The volunteers are listening to [people’s] challenges and giving them hope, reassuring them that they are not alone, that we are in this with them. We reminded them that this service is as important as the cleanup.”

Many of the people were surprised at the volunteers’ willingness to help, explained Elder Olson. “Some even asked why we were doing this. Eventually, they realized we were trying to follow Christ, whose name is on our vests and shirts, and that we were really just trying to help them.”

One man faced chemotherapy the next day. With great dignity he told the volunteers of his life and challenges. Initially, he had nothing for the workers to do. Finally, he allowed the volunteers to spray his basement for mold and take his ruined possessions to the curb. He also said they could return later in the week to see how he was doing and finish cleaning up after the water had fully receded.

The Church’s organization makes this service possible, said Elder Olson. “We collaborate with the Federal Emergency Management Agency (FEMA), the New Jersey government and wonderful volunteer agencies, including World Cares Centers, Samaritan’s Purse and various churches. Each makes a valuable contribution, but they are impressed at how the Church is able to marshal so many volunteers so quickly. Elder Olson responded, “Our organization is one of the reasons and, of course, the service flows from the hearts of the members.”