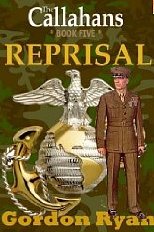 Fifteen years ago Deseret Book published a popular historical series called Spirit of Union by Gordon Ryan.  Ryan has recently expanded the original series through Smashwords and Pegasus Publishing from three books to five, with the new book, Reprisal, being the concluding volume.

The series takes nineteen-year-old Tom Callahan from a hopeless life In Ireland and Katrina Hansen, a young Norwegian woman traveling to Utah on a journey that includes the Mormon Mexican colonies, the Alaska Goldrush, the sinking of the Titanic, World War I, and the intervening years to World War II. The story shifts to their children and grandchildren, their trials and triumphs, yet keeps them an integral part of the saga.

Reprisal begins with their son Tommy, a career US Marine, teaching at Sandhurst in England. He gets caught up in preparations for World War II which no one other than Winston Churchill seems to believe will happen.  He also becomes involved with a young military doctor who distances herself from him, until he learns she is LDS and has no reason to suspect he is also.  He returns to Church after almost twenty years away and the two marry.  There is some question concerning his motive for going back to Church and he appears to lack commitment or understanding of eternal concepts.

The attack on England begins with nightly bombing raids and unprepared England scrambles to build airplanes and defend itself.  Tommy is returned to America where he performs much the same assignment at Annapolis as he did at Sandhurst.  The United States is not yet in the war, but many feel its entry is inevitable.  The attack on Pearl Harbor speeds up America’s time table and their entry into war is almost as unprepared as that of England.  New Zealand becomes a major base for operations in the Pacific and Tommy receives orders to be part of that endeavor.

Tommy’s twin sister, Tessa, has a running battle with her son, whom she is determined should become a doctor while he  is equally determined to enlist and become a pilot. Tommy and Tessa’s older brother, PJ, has made his home on a large sheep station in New Zealand and is heavily involved in politics.  Tommy’s assignment affords them an opportunity to spend time together and resolve old wounds.

Reprisal not only provides an insider’s glimpse from the eyes of three different countries, allies, who fought in World War II, but it shows the strength derived from a solid family relationship.  It’s a good reminder of the scientific, cultural, communication, and economic changes the last century introduced and their impact on individuals and countries caught up in global warfare.

Ryan’s narrative style is not as personal as I would like and he could do more showing rather than so much telling, but the scope of this series covers such a broad spectrum of time and space this style prevents bogging down on trivia and expedites the rapid chronological progress of the story. Reprisal holds the reader’s attention well and delivers some facts concerning the war many of today’s generation may not know such as the role Joseph Kennedy, father of President John Kennedy, played as the US ambassador to England.  History buffs will particularly enjoy this volume.

Gordan Ryan  is a writer with a varied history.  He has lived and worked in six foreign nations and a dozen or more states.  He served in the U.S. Marine Corp and in the Air Force.  He has worked as a city manager and as chief executive officer of a large homeowners’ association.  He now writes full time and he and his wife split their time between the American Northwest and their home in New Zealand, a home which was unfortunately seriously damaged in the recent earthquakes there.