BYU again in the Top 10 for grads that get Ph.D.s | Meridian Magazine

BYU again in the Top 10 for grads that get Ph.D.s 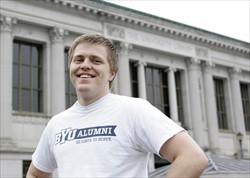 Academically speaking, Daniel Mortensen was a “late bloomer” according to his faculty mentor.

In Daniel’s own words, chemistry classes are “pretty tough” and “discouraging to a lot of people, myself included.”

But by graduation, Daniel was the lead author of a study published in a respected chemistry journal and he had punched his ticket to one of the world’s top chemistry Ph.D. programs, UC Berkeley.

“BYU allows students to get a lot of hands on experience that isn’t necessarily available anywhere else,” Daniel said.

Because BYU is primarily an undergraduate institution, each year several hundred new graduates like Daniel fan out across the country after gaining acceptance to Ph.D. programs at other universities.

Over the past decade, 2,442 of BYU’s graduates have earned Ph.D.s. That figure makes BYU 10th in the country as a Ph.D. launching pad – and there are signs of an upward trend.

Looking at just the past five years of data, BYU ranks 5th in the country as a Ph.D. launch pad – ahead of schools like Harvard, Stanford and Yale.

So how did this once-struggling chemistry student turn the corner and get a leg up on grad school admissions?

“The one-on-one discussions with professors and actual lab work helped me figure out how things work and what I wanted,” Daniel said.

Earlier this year, Daniel and Professor David Dearden demonstrated a fundamental law of physics on an incredibly small scale. Starting with a pumpkin-shaped molecule, they attached to each side different types of positively charged atoms. Then they smacked these new molecules on purpose into something else to see how much energy it took for one of the atoms to break free.

Their measurements corresponded perfectly with a theory called “Coulomb’s law.” The duo published their results in the journal Chemical Communications.

“The clever thing about this is figuring out how to control the distances on a scale that’s smaller than the size of an atom,” Dearden said. “The reason we care to know something so fundamental is that, in the long run, we want to help people build molecule-sized machines. Perhaps someday they’ll be able to make machines that you can inject into the bloodstream to clear out arterial plaque.”

While Daniel spends the next few years among the bright minds of Berkeley, his mentor back at BYU preps for another school year and another crop of undergrads.

“Our students are pretty highly sought after,” Dearden said. “Nearly all of the undergrads in our department get research experience. If they don’t, it’s their choice.”