Harry Potter and the Deathly Hallows, Part 2- Review(Grade: A+) 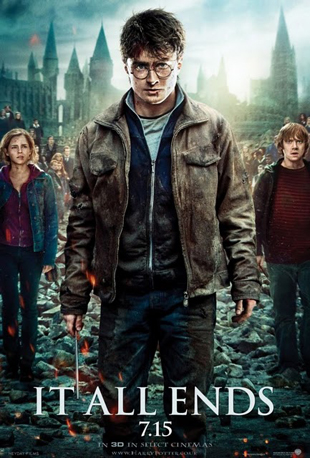 This will be the most worthless review I’ve ever written. Most of you are going to see this film. The rest of you have dug in your heels on this series and refuse to give it more of a chance, so nothing I’ll say will change your mind…but allow me to try anyway. Writing this series off because its premise revolves around a “boy wizard” is like smirking at The Dark Knight for being about a bat-man, The Lord of the Rings as being about “stupid dwarves and elves,” and Up as being about “some flying house.”

Audiences love those films because of rich characters they can relate to, powerful themes they can apply to their own lives, the variety of emotions conjured while viewing, and the imagination put up on screen. In other words, they respond to well-told stories that carried real-world meaning while being tremendously entertaining.

With the thrilling, terrifying, heartbreaking, hilarious, and uplifting Deathly Hallows Part 2, Harry Potter seals its status as one of the great cinematic stories of all time. What’s more, though Potter has always been a very good film series based on an excellent batch of novels, with this stunning finale the movies finally do complete and utter justice to their source material. By that I don’t mean that everything from the novel made it onscreen, nor do I mean that changes weren’t made for the film version. I don’t care about that; film is a different medium than literature, so if one wants the details that are missing, one should go to Rowling’s text. No, what I mean is that I was every bit as moved, every bit as scared, every bit as engrossed, and every bit as inspired to be a better man when I left the theater last night as I was when I first read Deathly Hallows four years ago.

What can I say about the film that hasn’t already been said elsewhere? The acting is uniformly excellent, and though that’s par for the course with this series, everyone really takes it to a new level here. Daniel Radcliffe gives his absolute best performance as Harry Potter; he’s heroic but human, and when he’s scared, heartbroken, or courageous, the audience feels the same. Ralph Fiennes’ Voldemort is given plenty of screentime and he finds new layers of menace, motivation, and, surprisingly, vulnerability that makes this villain all the more dangerous.

Alan Rickman’s Severus Snape reveals his back-story in what, without hyperbole, should earn him a Best Supporting Actor Oscar nomination. The supporting players all have their moments to shine. What minor quibbles I have (make young Lily’s eyes blue, dangit!) are overwhelmed by this simple fact: director David Yates and screenwriter Steve Kloves have saved their best work for last. The action and spectacle is on par with what one might expect from a Lord of the Rings film, but it’s the quieter character moments that stay with you after the credits roll, and this is due as much to direction and writing (both Klove’s and Rowling’s) as it is acting. Composer AlexandreDesplat, following everyone else’s lead, creates a daring work that deftly balances nostalgia (using themes from the series’ previous composers to evocative effect) with bold originality. It is a tremendous film score and the first one this year that I immediately wanted to buy.

Most importantly to Latter-Day Saints (and others): while the past few films focused on the spread of evil and despair while good hangs by a thread, this finale brings chills, a lump in the throat, and even a few tears as courage, kindness, and love make their final stand against darkness. Despite this being the most chilling and violent Potter film, the feeling that emerges above all others is one of being uplifted and inspired to be kinder, more virtuous, and more appreciative of those around us. This is because evil is portrayed as evil and good is portrayed as good. The central theme of Rowling’s novels rings clearly here: friendship, family, and selflessness may be buffeted and tested by the forces of evil, yet they ultimately overcome, perhaps painfully but triumphantly. From meager beginnings (I gave the first film a C+), the Harry Potter series has blossomed into a story that will work its magic on generations to come.

CONTENT OVERVIEW: Harry Potter and the Deathly Hallows: Part Two is rated PG-13. It is violent and somewhat bloody, with many dying at the wand of its central villain or in a tremendous battle. A man is killed by a vicious snake attack. A teenage girl is briefly shown dead and being chewed on by a werewolf. A teenage boy withstands a vicious attack by the main villain in a final showdown. Corpses litter a battlefield, some of them belonging to long-beloved characters. There is one use of moderate profanity, but no sexuality or nudity. It is too intense for young children. Recommended for young teenagers and up.

MESSAGES TO DISCUSS: Our relationships with friends and family continue beyond the grave (D&C 130:2). Love your enemies, do good to them that hate you (Matthew 5:44). Look beyond the outside appearance of a person to see their heart and intentions (1 Samuel 16:7). The greatest love is to be willing to give one’s own life for one’s friends (John 15:13). Good people are justified in fighting wars to protect their freedom, their loved ones, and their beliefs from tyranny (Alma 43: 45-47).