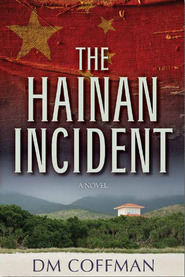 Yi (Jason) Jichun is a Washington D.C. attorney, not a spy.  When his expertise in the Chinese language and his understanding of law make him a prime candidate for a rule of law program being introduced by the Chinese government in cooperation with the US government, using American law professors as instructors, he finds himself in China pretending to be a Chinese judge enrolled in the program. Before classes start and he begins his search for corrupt judges who are undermining China’s chances of being accepted into the World Trade Organization, Ji visits a South China resort and stumbles into trouble.  So begins The Hainan Incident by D.M. Coffman.

Wandering around, playing tourist, Ji steps off the path of a cultural village and discovers a hut that doesn’t fit into the cultural village theme.  Through a door left ajar, he snaps pictures of a sophisticated computer setup with an intriguing logo for a screensaver.  After his stroll around the village, he returns to his hotel room to change into swim wear.  The next time he returns to his room, he discovers it has been ransacked.  No money is missing; his airline tickets, passport, and other valuables are safe.  Only one item is missing; his camera.  This makes him more curious about the strange logo he saw on the computer off the authorized path in the village and is puzzled by the Arabic letters at its spider web-like center.

Meijuan is grief stricken over the terrible things she has learned about her son.  He treated her badly and banned her from their village where she should be a leader by tribal right, but she has discovered he is involved in terrorist activity against the United States.  She tries to notify the American President, but her faulty English and her distrust of her own government thwart her attempts.

The Foreigner is adept at blending into various cultures.  He pays for information and favors, has no tolerance for anyone who doesn’t obey orders, removes people he no longer has a use for, and has made meticulous plans for attacking the US through their shipping interests.

Sarah, a young Chinese judge dreams of studying in America.  The top student in the class will be awarded a scholarship to a prestigious American law school.  She sees Ji as her toughest competition, but also her friend.  Their growing relationship is shattered when she discovers he isn’t what he pretends to be and she can no longer trust him.

Coffman has written a novel that is high on suspense and introduces Asian cultural elements unfamiliar to most Americans.  Having lived in China for several years where she taught at a
Chinese University, she has firsthand knowledge of the Chinese cities and countryside, deep love and respect for the Chinese people, and a realistic understanding of the size and realities of the country and life under communist rule.

The first few chapters of this novel are a little confusing because they don’t follow in strict chronological order and because the story is told from so many points of view, including an occasional see-all omnipotent narrator.  I found the style quite similar to that of Tom Clancy, which seems to work well for high suspense thrillers.  The story is powerful and keeps the reader turning pages, unable to put it down.  The background is fascinating.  Other than the fact that some of the teachers at the University are from BYU, which is factual since BYU does sponsor many American teachers who teach in Chinese Universities, some of the few LDS elements in the story feel a little forced.  The characters are well-defined, the protagonists are likable, and even the bad guys are interesting.  After the first few chapters, which serve as a powerful hook to draw the reader into the story, the plot moves forward in a fast-paced excellent fiction arc. Suspense and action readers will enjoy this one.

The Hainan Incident is Coffman’s first novel, but not her first book.  She is the author of A Peking University Coursebook on English Exposition Writing published by Peking University Press.  She lived in the People’s Republic of China from 2000-2004.  She has also lived in Northern Virginia and worked in Washington D.C. She has degrees from Brigham Young University and National University.