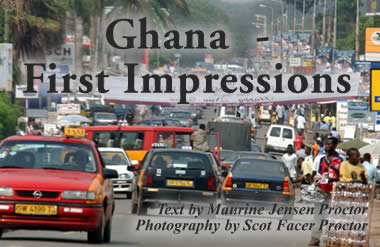 Meridian’s senior editorial staff (Maurine and Scot Proctor, and Sylvia Finlayson) is in Ghana, West Africa, this week, covering the temple dedication in Accra and introducing our readers to a people so innately spiritual that they formed their own congregations and begged for the gospel long before the Church came. In articles this week we will take you to an African temple celebration, to the day of dedication with President Hinckley, and into the lives of Ghanaian saints whose spiritual strength is noteworthy and poignant. But first, come with us on a journey to Africa and immerse yourself in another world.

We have arrived in Ghana a day before President Hinckley is coming, and the runway is a wet and bright reflection of airport lights. It has rained during the night, unusual for this time of year, and the native Church members tell us with excitement, “It is because the prophet is coming.”

As we drove the short distance from the Accra Airport to the temple, we were shown an unusual site–thosands of large fruit bats hanging in the trees.

Late November through March is the dry season, and the Harmattan winds carry dust from the Sahara, disappointing photographers as it covers everything with a fine layer, limits visibility and diffuses the light so the sun still pounds, but the sky is not truly blue. Yet, today, we are told, the rain, which nobody has seen for two months, has washed the temple clean, cooled off the land, and welcomed the prophet to dedicate their temple.

We were told that in the evening when the bats leave the trees and go hunting for insects they can blacken the skies from the shear numbers of the them.

To a people so spiritual that they flock to the Church, reporting dreams, impressions, and tearful experiences with the Holy Ghost, the rain seems to be a likely miracle.

“We have dreamed that we would have a temple and be able to seal our families together for eternity,” they say, “but we never thought this day would come.”

We received a first-hand understanding of the obstacles to getting anything accomplished in Ghana when we arrived at the airport. Since we were flying on an African airline, we were told to be at the airport in Baltimore 5 hours early to assure our baggage would make the flight. We complied, but we had no idea of the hidden punch behind that instruction.

Downtown Accra was congested and smokey and traffic was a little wild.

Once at the airport in Accra along with the 70 or so other passengers from our DC-10 flight, we waited for over an hour at the moving belt which carried suitcases. The wait was in vain. We could see the trailer just outside the window full of bags from our flight, but nobody was unloading them. The moving belt was already full with other unclaimed luggage that circled endlessly before us. Some of the passengers, exasperated and used to Western efficiency, started to offer suggestions. “Let’s take these unclaimed bags off and load ours on.” One at a time, whenever a vacant spot occurred on the belt, one of the bags from our flight would finally be added.

Some of the passengers began to be angry, shaking their fists, making their suggestions more emphatic for how to procure our bags, but finally, in this slow manner the baggage cart from our flight was gradually unloaded-and then that was it. Most of us were still missing bags. We were missing two critical ones. The lady at the “lost and found” desk explained it. They hadn’t loaded 66 bags on the flight in Baltimore because there was no room on the flight. Too bad.

What? They knowingly and purposely left bags behind? Oh yes, but no worries. Your bags will probably arrive next Tuesday on the next flight in. This was Thursday.

Nobody had told us what experienced African travelers learn: you always lose a bag when you travel to Africa.

About 70 percent of Ghana’s economy is hand sales–people selling things on the streets and having small stands like this one.

When we told Sister Marged Kirkpatrick, a public affairs missionary of our plight, she gave us this aphorism. “The missionaries here call it WAWA,” she laughed. “West Africa wins again.” She had her own stresses, having gone to an office in downtown Accra every day that week to pick up flags for the “Day of Celebration” program and having been unable to get them for one excuse or another. “Come tomorrow,” the officials said. She had run out of “tomorrows”.

Ghana, like many developing nations is inefficient, contradictory, slow, a place where it is difficult to negotiate the most everyday errands. Life is inconvenient and mere survival swallows up your time. The electricity goes out, the plumbing doesn’t work, the water is bad, the traffic snarls and comes to a halt. It is easy to get lost in Accra’s winding streets. “Sometimes we have just paid a taxi to show us where we are going and followed him in our car,” Sister Kirkpatrick says.

Handpainted instruments and small items like this are for sale all over Accra.

“You’d think you couldn’t possibly run the Church in a place like this,” said Sister Christine Skelton,” a senior missionary and wife of the secretary to the Area Presidency. The people have no phones. Few of them have addresses; they are just at the end of the dirt road or around the corner from the orphanage. When we were in the Philippines, one of the stake president’s address was “back of the Coca Cola factory.” That’s how it is here.

African folk art influenced by tribal traditions can be seen all over Ghana.

It should be impossible to have a Church in Ghana-and yet here it is. Here is the penetrating power of God’s love for his children most clearly displayed, like light piercing through a stained window. These African brothers and sisters with their beautiful, soul-searching eyes and finely-chiseled faces have something that makes all the rest manageable. “They are just so hungry for the gospel,” said Sister Skelton.

“I’m British, and we weigh people and look them over before we allow them to become close to us. Here in Ghana, they just open their arms to you, welcome you and love you,” she said. Not one of the senior missionaries working here would consider this a hardship mission.

“You can just stand on a corner with your missionary badge on, and you don’t even need to proclaim. The people just flock to you with questions. I was recently in the grocery store and was passing out some tickets to the temple open house,” she said. “When I turned around, I was encircled by many more people, also hoping for tickets.” Where else does this happen?

“If ever a people deserve the temple, these people do,” Sister Skelton said. It is a real showing of how deep the Lord’s love is for them. As Charles Dickens said of the early English Saints who were boarding a ship to leave Britain and come to Zion, these are ‘the pick and flower of England.’ So our Latter-day Saints here are the ‘pick and flower’ of Ghana.

The spiritual sense that runs in and through everything leading up to the temple is that as the gospel lifts the members, they will, in turn, transform Ghana itself. Ghana will be renewed, breaking the shackles of poverty, ignorance, and misery that has for so long held her bound.

The temple has come to Ghana, and from now on nothing will be the same.

Click here to go to Part 2 of Ghana: First Impressions.