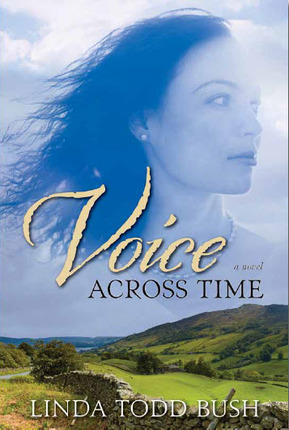 Linda Todd Bush’s first published novel, Voice Across Time was released earlier this month.  It is the story of a young woman, Abby Peters, who is a member of The Church of Jesus Christ of Latter-day Saints, but along with her parents has been inactive since she was a child.  She is in love with an up-and-coming, young attorney who works in her father’s Denver law firm.  After the death of her grandmother, she takes time off from her own busy career to travel to St. George, Utah, to pack up her grandmother’s house and get it ready to sell.

When Abby arrives in St. George, she renews acquaintance with her grandmother’s elderly neighbor, her own childhood summer vacation friend, and a young doctor who is her friend’s husband’s best friend.  He was also her grandmother’s doctor.

Packing up the house becomes a more formidable task than she  had envisioned and she often struggles with memories of wonderful summers spent in the old house.  As she works she gains a deeper appreciation for the generations who have lived in the house since Brigham Young sent her ancestor, Tom Fisher, as one of the first pioneers to settle Dixie, and learns it was he who built the house.

Before the house can be put on the market, the yard needs to be trimmed and pruned as well.  It is here that she becomes friends with the doctor who volunteers  his time off and  his pickup truck to haul off tree limbs, etc., to the dump. Little by little she is drawn back into attending Church and thinking about her life from an eternal perspective.  She feels drawn to the helpful doctor and to the Church but is confused by the strong feelings she has for her almost-fiancé back in Denver who calls her daily and lets her know how anxious he is for her return to the city.

Along with the modern awakening of spirit Abby goes through, a second story runs parallel to Abby’s story.  This story goes back to the 1840s and is the conversion story of Catherine, who joined the Church in England, was cut off from her parents, and married a young man aboard a ship bound for Nauvoo.  When Abby finds a photo of Catherine, she is puzzled by who the mysterious young woman might have been and is disappointed to discover Catherine’s name doesn’t appear in any of Abby’s grandmother’s genealogy records.  Still she feels drawn to her and feels they have some sort of connection.

This novel is unabashedly a conversion story, one that carries the reader step by step through an awakening of a desire to know what is truth to the culmination of discovering a real testimony.  It has a nice conflicted romance.  It is beautifully written and almost literary, invites a great deal of thought and pondering, but is slow.  There is not a lot of action and the plot line is predictable.  It is more about the process than the achievement of self-discovery, of testimony, and of learning the meaning of lasting worth.

I enjoyed this novel, yet became frustrated with the cumbersome attention to detail in every scene.  Though I felt it could have been greatly shortened, I still found the slower pace gave time to think and evaluate the choices faced by both Abby and Catherine as they gained testimonies and made hard choices, including disappointing good people who loved them, but who did not understand the importance of each young woman’s faith.

Linda Todd Bush has had years of experience writing software training manuals and found writing a novel a welcome change.  She loves to travel and to be with  her family.  She currently lives in Hurricane, Utah.