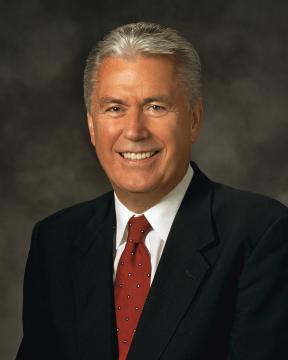 The world needs builders, not destroyers, President Dieter F. Uchtdorf, second counselor in the First Presidency of The Church of Jesus Christ of Latter-day Saints, told 800 community, business and religious leaders attending the Los Angeles World Affairs Council on 26 May 2011.

“It takes courage … and humility to put away old hatred, divisions and traditions that constrict and confine people into a blind succession of destructive behavior toward others,” President Uchtdorf said. “It is within our reach to breach barriers of hate and build bridges of brotherhood and understanding between opposing cultures, beliefs, religion and world views.”

President Uchtdorf talked about the growth of the Church from six members in 1830 to today, when there are more than 14 million Latter-day Saints around the world.

“The Church of Jesus Christ of Latter-day Saints is a global church. The principles and doctrines it teaches have the power to benefit and uplift the people of every nation, race and culture,” he said.

President Uchtdorf shared Church membership and building statistics that reflect the growth of the Church, but said such numbers are not the point.

“It is important to recognize that the growth of the Church is not merely about numbers of members, languages and buildings; our mission is to bring souls unto Christ — that is the important part — and thereby improve the lives of our fellow men. We teach, support and encourage all men, women and children to draw near to God and live charitable and honorable lives,” he said.

“Being continuously engaged in improving the lives of our fellow men is not just theological theory, which it easily may become, but rather an application of the gospel’s core doctrines. The more our hearts are inclined to God, the more we desire to relieve suffering and help others become self-reliant,” he said.

President Uchtdorf said that in this time of uncertainty and fear there is still hope for virtue, moderation and divine moral principles. He called on the audience to join with the Church in “strengthening families, building righteous societies and helping our brothers and sisters improve their lives the world over, regardless of culture, language or religious beliefs. I believe these are worthy and righteous goals.”