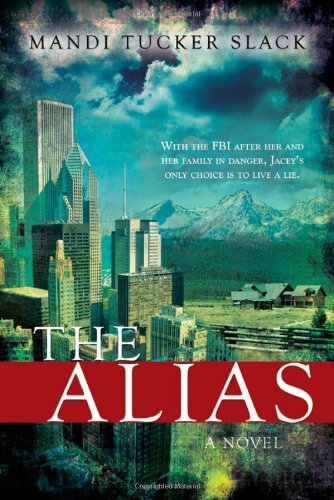 Mandi Tucker Slack tells an intriguing story in The Alias, her first published novel. Jacey Grayson has been divorced for six months and is hiding from her ex-husband, John.  She and her nine-year-old son, Blaze, left Chicago and are living with a friend and her daughter in Detroit. Her fear of being found by her abusive former husband who threatened to kill her is ratcheted up when she is approached by a couple of FBI agents and learns they are looking for John on suspicion of murder and involvement with organized crime. At her friend, Melissa’s urging, Jacey assumes Melissa’s identity and travels to Utah to stay with relatives Melissa has maintained some contact with, but has never met.

Jacey has every right to fear John since he beat her numerous times and the last time attempted to kill her.  She was saved only because her son ran to a neighbor for help and the neighbor called the police.  John served only a few months in jail, during which time Jacey filed for divorce, gained complete custody of Blaze, and left the city. Jacey is slowly regaining her sense of self-worth and is deeply concerned because Blaze seems to be keeping something from her and is experiencing emotional problems brought on, she suspects, from the many times he saw his father injure his mother.

Jacey and Blaze are warmly welcomed by Uncle Grant and Aunt Helen on their farm in Utah, but their widowed son, who lives nearby, seems to have ambivalent feelings toward her.  Jacey suffers guilty feelings for lying to people who are so nice to her and her son.  Though they only intend to stay with Grant and Helen a short time, then move on to Salt Lake, they are reluctant to leave until a frightening turn of events places them in greater danger.

The plot follows a satisfying fiction arc and has sufficient twists and turns to keep the reader engrossed.  Jacey is a likable character.  Some of the other characters are harder to like because of characteristics given them that are excessive and distract the reader from seeing them as real people. I found a lot to like in this novel, but I also found many elements that detracted from a great story.  Poor grammar is acceptable in dialog if the characters are uneducated, but is out of place for the characters in this story.  A few well-chosen slang terms help to stress the time period  of a novel and lend a touch of realism to characters, but in this case it is overdone to the point of silliness. The same is true of “pet words.”  One FBI agent “smirks” so much, he’s difficult to take seriously.  The first few pages of the story are boring backfill and the first encounter with the FBI agents is unrealistic.  The agents give away far too much information to be authentic. There are also more points of view than needed for a book of this length.

Alias has an excellent cover that is both artistic and hints at both the city and rural elements of the story.  The clouds are ominous enough to hint that something drastic is about to happen.

Slack shows obvious talent in her ability to spin a story and I predict that once she masters the technicalities will prove to be a formidable suspense writer.  I can hardly wait to read her next book.

Mandi Slack is a small town Utah native and graduate of Utah State University.  She majored in special education. She loves the outdoors and enjoys camping and hiking with her husband and children.