Outstanding Achievement awards went to Susan Evans McCloud and Rick Walton Saturday evening at a glittering awards ceremony held at the Sheraton Hotel in Salt Lake City. The pair were honored at the gala held at the conclusion of the annual LDStorymakers conference, a writers’ conference held each year to encourage and promote writers of LDS fiction.  Honors also went to top writers in various other categories. 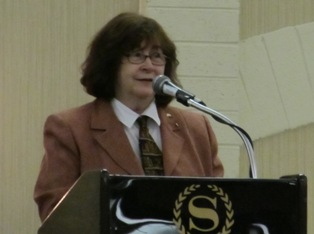 McCloud was a pioneer in writing LDS fiction.  Her career has included more than forty-five  books, not all of them fiction.  She has also written plays, scripts for television and movies, poetry, newspaper articles, and musical scores.  Two of her hymns have been published in the Church of Jesus Christ of Latter-day Saints hymnbook.  Her Lord I Would Follow Thee has been recorded by the Mormon Tabernacle Choir and is a much loved LDS hymn. Along with her active writing career, she is the mother of five children. 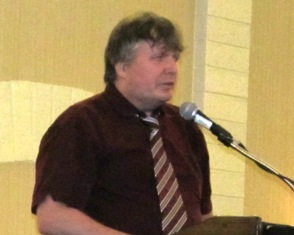 Rick Walton is the much loved author of over eighty mainstream books for children, including joke books, mini-mysteries, activity books, and picture books.  He has also written educational software and is a teacher and mentor to many other writers.  A strong interest in language led to his major in languages at BYU, but has been used extensively in his writing and school presentations.  He and his wife are the parents of five children.

There were five categories of Whitney awards presented for outstanding writing achievement as embodied by a novel published in 2010.  These awards went to Julie Wright for Cross My Heart – Best Romance; Stephanie Black for Cold as Ice – Best Mystery/Suspense;  Annette Lyon for Band of Sisters – General Fiction; Sandra Gray for Trespass – Best Historical; and to Brandon Sanderson for The Way of Kings – Best Speculative.

Another two Whitney awards were given in the youth division for novels written for the youth market. Kimberly Griffiths Little was awarded for Healing Spell – Best Youth General Fiction; and Ally Condie for Matched – Best Youth Speculative.

Novel of the Year award was a tie between Brandon Sanderson (Way of Kings) and Dan Wells (Mr.Monster). Best Novel by a new author went to Kiersten White for Paranormalcy. 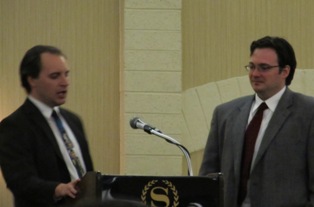 The Whitney Awards are the sponsored by LDStorymakers.  Jaime Theler and Crystal Liechty served as this year’s conference co-chairmen and Josie Kilpack was in charge of the awards program.

To be eligible for an award an author must be nominated by at least five people for a work published during the contest year.  The work doesn’t need to be directed toward an LDS audience nor observe LDS standards, but the author must be a member of the LDS Church. A panel of judges chosen from professionals in the book publishing world (publishers, book sellers, published authors, teachers, librarians, reviewers, etc.) narrow down the nominees to five outstanding novels in each category, then anyone belonging to Storymakers or involved in any aspect of writing and publishing is eligible to vote for one top winner in the assigned category.

The selection of Best novel of the Year and Best Novel by a new Author are narrowed down farther since only those people who were able to read all thirty-five nominees are allowed to vote in this category.  Factors such as general popularity as evidenced by book sales are not taken into consideration.